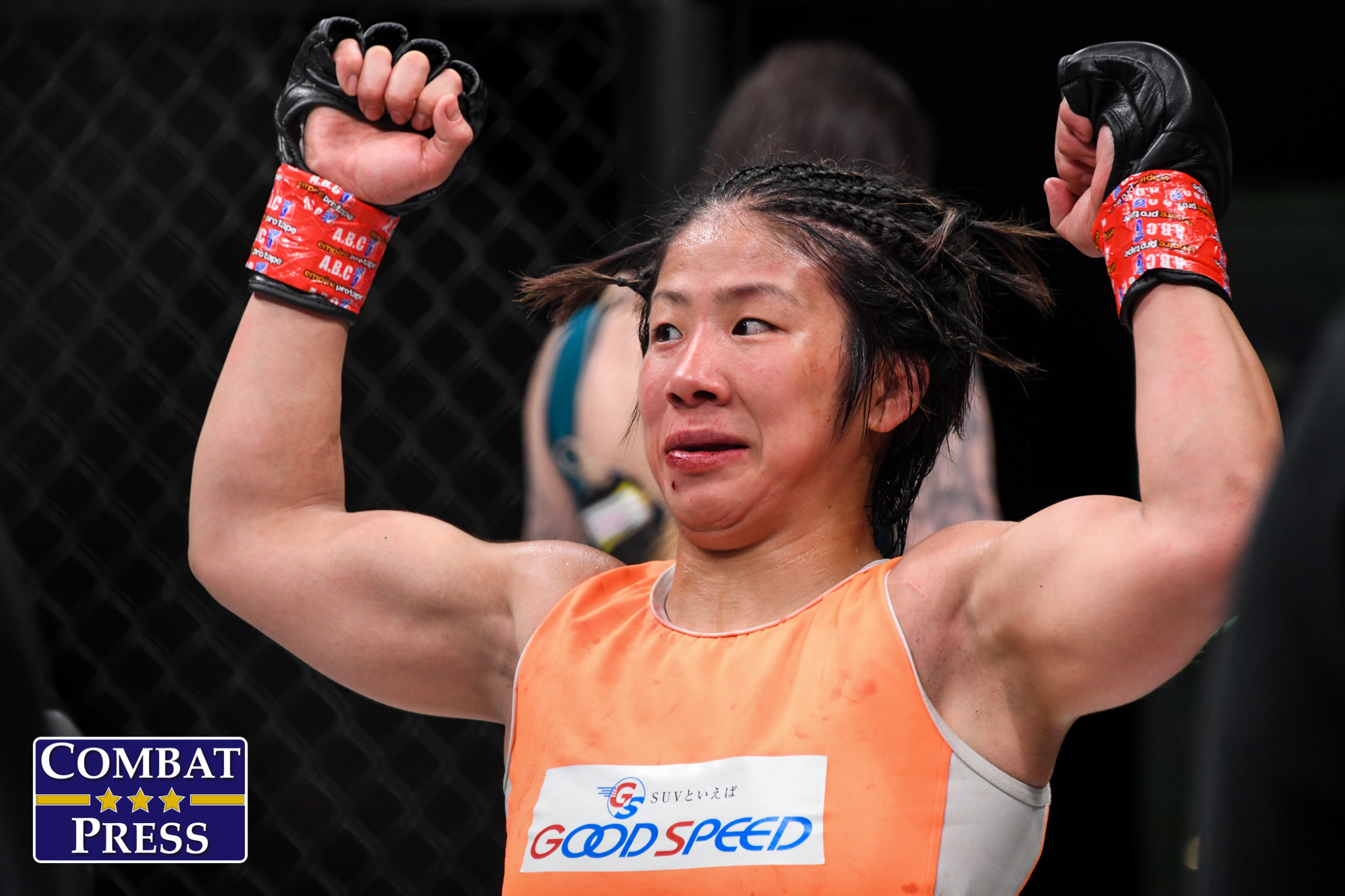 Several fights fell through this weekend for the UFC on ESPN+ 41 card, but lucky for us, none of them were the female bouts. We had a couple of very fun ones, so let’s get into them. My reviews may be a bit shorter than normal, though, as I was away this weekend cornering a teammate and arrived home late Sunday night, but wanted to watch these fights and at least provide some sort of review.

This was the perfect fight for Murata, who defeated Markos by unanimous decision. She was able to use her strengths, that being her wrestling, to get the win, but she was also able to see where she needed to get better.

Everyone, including Markos herself, knew what Murata wanted: takedowns, stay on top, and land ground-and-pound. This would be a battle to see if Markos could prevent that. In the first two rounds, Murata was able to impose her game, get it down, and get on top. However, Markos, to her credit, was able to fight off any really serious damage.

How could Markos have avoided those takedowns? Well, against an elite wrestler like Murata, it is difficult. Kicks would help, but here is a little something you don’t hear often — and being a short fighter myself, it is something I know a lot about — even when the kicks thrown at us are low leg kicks, we have shorter legs and less area to cover to reach down and catch those kicks. So, Markos maybe would want to throw those kicks at the end of combos rather than throwing them as a single strike. Markos tried to use movement, and it’s not that she was doing anything bad, but Murata was just too good at being able to get in and get the takedowns.

From there, Markos had a problem. She is pretty good off her back. She’s good at avoiding damage and reversing positions and/or throwing up submission attempts. However, she couldn’t just sit there and not move, because she’d get hit and lose the round. When she wanted to try to throw up submission attempts or anything like that, she then was running the risk — a big risk — of letting Murata end up in an even more dominant position. Murata would likely feel those attempts coming, know how to avoid them, and get to a better position.

As round three started, it seemed Markos wore her frustration on her face. She knew what was coming and couldn’t find a way to prevent it, but she showed a lot of heart in still trying. When you feel mentally beat, discouraged and frustrated, it is so easy to just give up, mentally check out, and accept your fate. Markos did not do that. Instead, she kept trying.

Markos has now had two straight fights where she has faced a specialist who really excels in one thing. When you can’t stop that one thing, it is hard to win.

What’s next for Murata? Stick around; I’ll get there.

This is the one I was anxious to see, because, in checking on Twitter, it seemed there was some controversy about the decision. McKenna officially won the fight in a unanimous verdict. Let’s get it out of the way, though. I scored it 29-28 for Hansen. I gave her rounds one and three. However, I think it is incorrect to call it a “robbery,” as I saw so many do. These were three fairly close rounds.

Mainly, what we saw was the first half of rounds going McKenna’s way. She did a good job landing punches that Hansen had some trouble blocking or was willing to eat in order to try to get takedowns. The second half of rounds would go Hansen’s way, as she was able to get it to the ground and use her superior grappling.

Hansen seemed to be confident in her own stand-up game, though, and did land some good strikes of her own. She was willing to stand some, perhaps with the game plan of not getting the takedowns till midway through. But perhaps one thing that might have helped is knowing how short the reach of McKenna is — from what I hear, it’s the shortest reach in UFC history — and staying on the outside a bit more to lessen McKenna’s ability to land her own strikes. McKenna did have the edge in power strikes, and had there been more distance between them, those wouldn’t have landed as much. Also, Hansen should have perhaps gotten the takedowns sooner. I got the feeling she was very confident she could get them whenever she wanted, and she was pretty much able to, so maybe getting them sooner would have paid off.

McKenna did well on the feet. She does compensate well for her short reach. What she could have possibly done differently is to move a bit more. It’s not in her nature to move, though. She was content to stand and bang, but a little more movement might have limited or at least made the takedowns harder.

Overall, it was a great fight.

What’s next for McKenna? Well, she and Murata both won. Both ladies are the same weight and on the same schedule, so why not match them up?

There really isn’t much to say about this one, in which Yoder defeated Granger via unanimous decision. It’s probably a good time for this fight to have happened, when I am short on time to write about them.

Yoder won this fight on technique. There wasn’t a ton of stand-up. It was mostly clinches and a battle for takedowns. There were some very good battles for those takedowns, with each fighter trying to get it there and wanting to make sure to land on top. Yoder won those battles for the most part, but Granger is very good even on her back and was able to avoid real damage.

In the third round, Yoder was really able to pour it on and secure the decision. It was very impressive, considering it was a fairly grueling battle fighting for those takedowns, that she could have her best round in the third. Yoder is so much better than her record indicates. In each fight, she is able to adapt and show a different part of her game. This was a very important win for her, too.

Granger could have maybe tried to make it more of a striking battle and kept it on the feet. Specifically, I think body shots would have worked well for her. However, she didn’t really do anything that could be called “wrong.” Granger didn’t perform badly. She was just out-techniqued on this night.

What’s next for Yoder? Perhaps someone like Mizuki Inoue would be an interesting opponent that makes some sense.