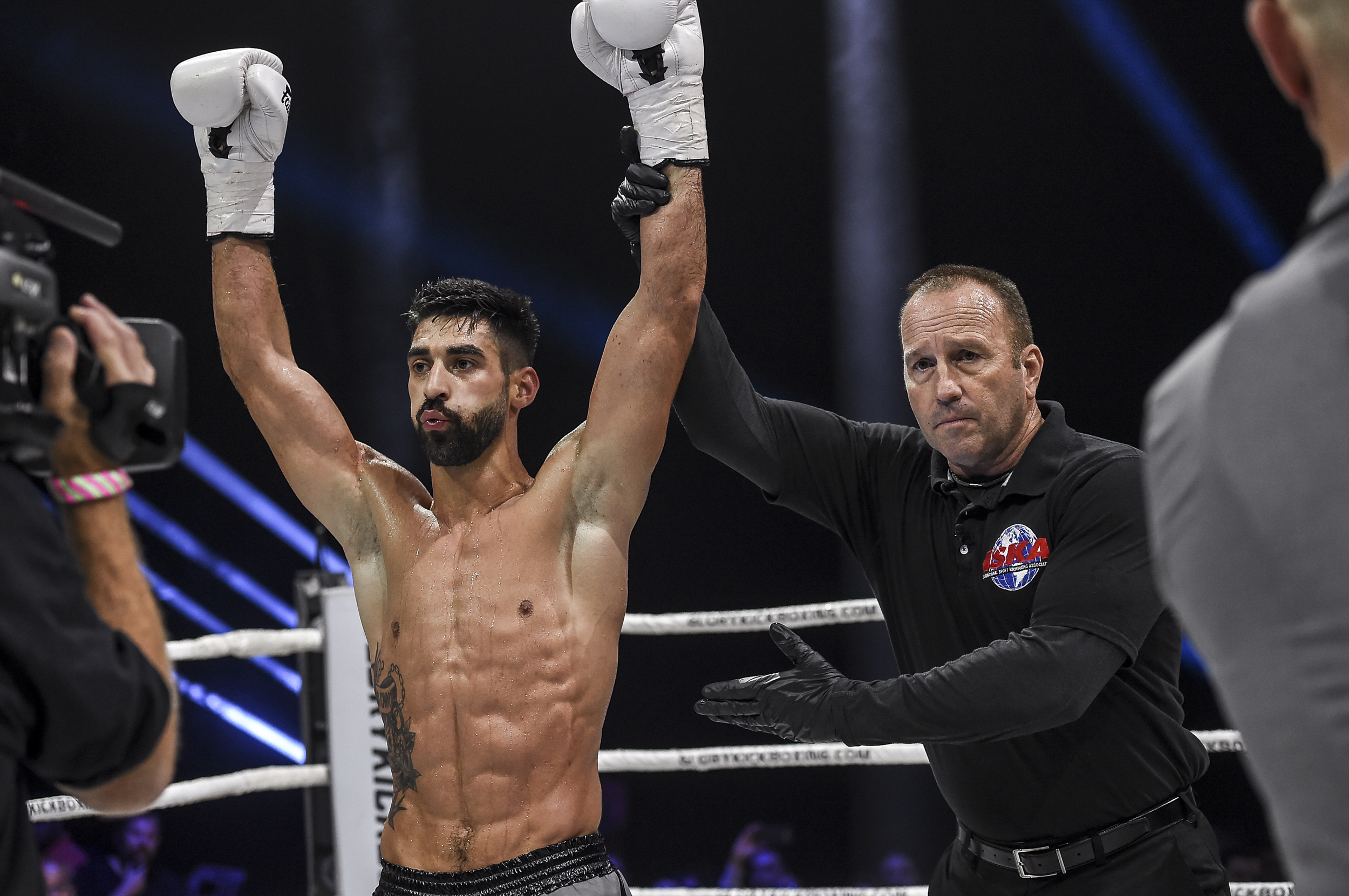 To say that 2020 has been unpredictable would be a massive understatement.

Certainly a global pandemic has affected everyone’s way of life, but the world of kickboxing also endured a major shakeup when GLORY filed for bankruptcy and switched ownership. In the fallout, many of the sport’s top names, including former champions Marat Grigorian and Sitthichai Sitsongpeenong exited the promotion. In the case of Grigorian and Sitthichai, the destination was Asia’s ONE Championship organization. This left GLORY’s lightweight No. 1 contender and former title challenger Josh Jauncey in a bit of a predicament.

“I was on a crash course with Grigorian. I was finally going to fight him,” declared the English-born Canadian while speaking to Combat Press. “We had been in the same promotion for six years together, and we’ve never fought. He was the champion, and I was ready to fight him, but he ran away — he left for ONE.

“I don’t blame him for going to ONE — I’m sure it made sense for him — but I still want to fight him. Whether I beat him in GLORY for the belt or beat him in ONE for no belt, I still beat him and in my mind, [that would make me] GLORY champion.”

Although those GLORY title aspirations are still fresh in his mind, 2020 also marked the first time in his professional career that Jauncey wasn’t in the ring. When negotiations with the new GLORY ownership didn’t pan out, he found himself a free agent for the first time since 2013.

“We’re not on bad terms or anything. We’re still willing to discuss and negotiate with them,” Jauncey explained. “I’ve been with them for six years, since the beginning of my professional career basically. I signed with GLORY three fights in, and I’m very grateful for the opportunities they have given me. I got to build my name through them, but after six years, there are lots of promises that haven’t been kept on their part, and it’s about time to check out free agency.”

After 17 fights, including a title shot against then-champion Sitthichai, Jauncey has been through a little of everything under the GLORY banner. Yet, looking back, the 27-year-old still questions what the promotion had in mind for him.

“In my GLORY debut, I was a 21-year-old kid from Canada, and they put me against a K-1 veteran. I don’t know who you’re trying to build in that situation. Who are you trying to help?” asked the Canadian. “Luckily, I came out with a win, but that’s not the fight you do to build someone’s brand. It was a very risky fight. I don’t feel like I’ve been promoted very well. I don’t always feel like I’ve been treated fairly in fights. Some of it is out of their hands, but, as far as being promoted, they haven’t done me too many favors when they said they would.”

On top of feeling like an afterthought from a promotional standpoint, Jauncey also doesn’t believe he always got a fair shake from the previous ownership, whose own interests may have been directly in contrast with his priorities.

“The matchmaking favored a lot of the Dutch fighters,” said Jauncey. “If we won, it was a surprise. The people who were in charge of matchmaking, there was a conflict of interest there. Things were made that would benefit the matchmakers if they won. They were making money off of those guys winning. It wasn’t fair. There were situations where we should have won or at least got an extra round, and it got tilted in the other fighter’s favor. There were people who acted very aggressively when we spoke up. Those were the people who I would be taking money out of their hands if I won. A lot of those people are no longer in GLORY anymore, or so I’ve been told. They’re not part of the board as they were before, but, still, the damage has already been done there.”

Despite his past frustrations, Jauncey hasn’t completely closed the door on a GLORY return. However, he might have something else in mind for the next phase of his career.

“GLORY isn’t out of the question, if they can come back and offer me something that makes sense,” declared the veteran. “Some of the people that gave me problems before are not there. We can talk. At the end of the day, it’s what’s best for business [and] for me. It’s not a personal thing.

“But what’s the harm in seeing what else is out there? In terms of kickboxing, there’s not much, but there is more out there. Maybe there’s more to explore outside of kickboxing as well.”

The coronavirus (COVID-19) pandemic restrictions on gyms have made life difficult for a lot of professional fighters. In the case of Jauncey, though, it was an opportunity to focus.

“I have been training very consistently. I’m in a fortunate spot where my dad owns the gym where I train. So, while we were closed during the lockdown, I’ve got a key, and I was able to keep training. My fortress of solitude,” he quipped with a laugh. “I was able to add some muscle and improve on some things I wanted to work on while I was by myself. It hasn’t slowed me down at all.”

The 12 months away from the ring has also given Jauncey time to consider a new career path. With the financial landscape in combat sports skewed toward MMA, he is now opening up to the idea of fighting in a cage.

“Everyone had always asked me if I was going to switch to MMA or go to the UFC,” said Jauncey. “Every casual fan I know would ask. I would always say there was a lot I wanted to accomplish in kickboxing first. To be honest, I didn’t really like the ground work. The wrestling, grappling, [Brazilian] Jiu-Jitsu — it just didn’t interest me.

“But recently, seeing the climate of kickboxing right now — especially with GLORY — it’s kind of like, what’s going on here? I’m 27. I’m not old, but I’m not at the beginning either. So, I have to think about how to make a decent living, and MMA fighters do make more money. I’m friends with high-level MMA fighters, and they tell me that my kickboxing style works for MMA. The way I move, the way I defend — it would work for MMA. They’d always say that, and I’d pass it off and say I’ll stick to kickboxing.

“But watching the success that [UFC middleweight champion] Israel Adesanya has had — we move similarly. He’s a bit more flashy and takes a few more risks, but I could make it work. I’ve been doing some sparring and rolling; getting a feel for it. Before, I had no knowledge and couldn’t enjoy it. Now that I am starting to know what I’m doing and I can see the things work in sparring, it’s more encouraging. I’m starting to catch onto it a bit. Since I’ve had time off and can focus my energy into something else, I can go in a different direction.

“Maybe I won’t accomplish everything I ever wanted in kickboxing, but maybe I become the best MMA fighter in the world. It’s given me time to try something new instead of constantly preparing for a kickboxing fight.”

The financial incentive of MMA is certainly attractive to Jauncey. After all, kickboxing has continued to struggle to gain its footing beyond a niche market.

“When you hear guys getting signed to Bellator or the UFC and what they’re making, it’s like, what the hell? I just started making that in kickboxing, or just started making half of that in kickboxing. And they’re getting it in their first fight in the promotion?” Jauncey said with marked frustration. “I’ve been working so hard for the last seven years, and I’m getting paid peanuts compared to these guys. At some point, you can’t blame the kickboxing promotion. You have to blame yourself for not switching it up.

“The saddest thing is that it might mean the end of kickboxing. I love kickboxing more than anything else. It’s the most exciting sport out there, even above non-fight sports. It has so much potential, but a lot of these companies are not growing it properly. It’s not to say that I know exactly what to do either, but there’s a way to do it [and yet it] feels like some people are going in the opposite direction. Other people can see it, but the people making decisions aren’t making the right decisions.”

Even with his current flirtation with MMA, Jauncey isn’t determined to leave kickboxing behind. In fact, he’s just looking for another opportunity to prove he is an elite fighter.

“I’m open to all options,” he explained. “Definitely interested with ONE. Interested with Bellator. Enfusion — I don’t know how frequently they have events or what they pay [since] I only fought for them once. But all options are available. K-1 would be great, but K-1 isn’t really what it used to be. It’s not consistent. I don’t know if Bellator’s signing kickboxers anymore. But if I get a few local MMA fights, Bellator and UFC could be options. ONE Championship has MMA, too. Maybe I can do both.”

Jauncey’s mention of ONE is hard to ignore, as the promotion is currently home to the top four lightweights in the world, two of whom have battled the Canadian in the past.

“ONE Championship has the top lightweights — the ones you need to beat to be considered the best,” he proclaimed. “I would love to fight them — Sitthichai and [Giorgio] Petrosyan again, since I’m a little older and bit more mature — [and] show the world what I can do.”

While the past year hasn’t gone to plan for many, it’s clear that Jauncey’s future is far from bleak. Whether it’s in the ring or in a cage, he’s got his sights set on big things.