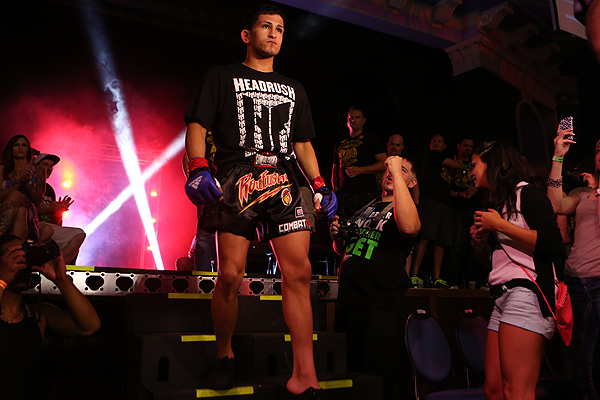 The last time Bellator MMA hosted an event was February. Now, following in the footsteps of most other major MMA promotions, Bellator is returning to action. The organization is set to touch down at the Mohegan Sun Arena in Uncasville, Conn., for Bellator 242.

The show features a bantamweight showdown between UFC veteran Sergio Pettis and Bellator mainstay Ricky Bandejas. Pettis is among a number of free agents to depart the UFC and sign with Bellator. The 26-year-old ended his UFC run on a high note with a win over Tyson Nam and then made a successful Bellator debut in January. Bandejas is now on a two-fight winning streak that brings his overall promotional mark to 3-2.

The co-headliner includes another UFC free agent in Jordan Mein. The Strikeforce veteran was on a two-fight winning streak when he left the UFC in 2018. Unfortunately, he’s been inactive ever since. Now, the Canadian makes his return to action against Jason Jackson, who is coming off a spoiler victory against Kiichi Kunimoto in December.

We can’t ever say it’s going to be easy when Pettis is involved. The veteran younger brother of Anthony Pettis has made a habit of going the distance when he meets quality competition. All nine of his UFC wins came on the scorecards. His first two Octagon setbacks were stoppages, and his other three losses went the distance. He’s a warrior, but he usually has to work hard for his wins.

Bellator gave Pettis Alfred Khashakyan for his promotional debut. He responded with a first-round finish via guillotine choke. That’s about as easy as it comes without going the route of serving up “enhancement” talent for Pettis to decimate. Khashakyan has played gatekeeper before while facing other high-level talents. He was the opponent for Ricardo Ramos on Dana White: Lookin’ for a Fight and for Sean O’Malley on Dana White’s Tuesday Night Contender Series.

The 28-year-old Bandejas is a tougher fight for Pettis. He played spoiler to James Gallagher, whom the brass was trying to set up as a future superstar. He also accounted for an early setback to the career of Merab Dvalishvili and stopped Tony Gravely, who just made his UFC debut in January.

Despite the success Bandejas has experienced at times in his career, he has also been hampered by recent losses that caused Bellator to ease off the gas pedal. His win over Gallagher had led to outings against Juan Archuleta and Patchy Mix, but those fights didn’t end well for Bandejas. He has since rebounded with a pair of victories, but they came against the much less daunting duo of Ahmet Kayretli and Fran Mlambo.

Pettis is going to be pushed harder in this outing than he was in his first Bellator appearance, but it’s still a fight the Roufusport disciple should win.

Welterweights Jordan Mein and Jason Jackson have been put in the co-headlining slot. Was this a good choice on Bellator’s part?

Canada’s Mein is a favorite of Bellator head Scott Coker from the old Strikeforce days. The 30-year-old was featured in fights against Evangelista Santos and Tyron Woodley when he was in his early twenties. Now, he’s two years removed from his most recent fight. Meanwhile, Jackson has popped up on The Ultimate Fighter, the Contender Series and Legacy Fighting Alliance shows before his current two-fight stint with Bellator. How either of these men is truly deserving of a co-headlining slot here over some of the other talent in the lineup is a mystery, though.

The most likely answer is that Mein is coming off a UFC campaign that ended with wins in his last two Octagon appearances. Bellator loves to push anyone it has poached from the UFC roster, and so Mein’s first fight with the organization lands in a featured spot.

Jackson has had his ups and downs, but he’s a surprisingly good fighter for Bellator to choose as Mein’s first opponent. The 29-year-old almost beat Ed Ruth, and he did outwork Kiichi Kunimoto. He’s a huge threat to a fighter who was once on a UFC skid that included losses to Thiago Alves, Emil Weber Meek and Belal Muhammad. Jackson has an opportunity to make a big name for himself with a win here while in the spotlight.

This fight has the potential to be an interesting scrap where the winner goes on to bigger things. Obviously, Bellator prefers to promote veteran talent it has brought in from elsewhere, which is why this fight takes precedence over more logical co-headlining choices featuring prospects like Tywan Claxton, Jay Jay Wilson, Rudy Schaffroth, Steve Mowry, Raufeon Stots and Cass Bell.

Heavyweights Rudy Schaffroth and Steve Mowry have been relegated to the preliminary portion of the card, which is a real shame. Before he was submitted by Tyrell Fortune, Schaffroth had been on a rampage of first-round stoppages, mostly via knockout. Mowry remains undefeated while mowing down all three of his Bellator foes by submission. This one could be fun, and it’s almost guaranteed to end in a finish. It’s just too bad Bellator has opted to hide two potential homegrown heavyweight stars where the majority of fans won’t see them.