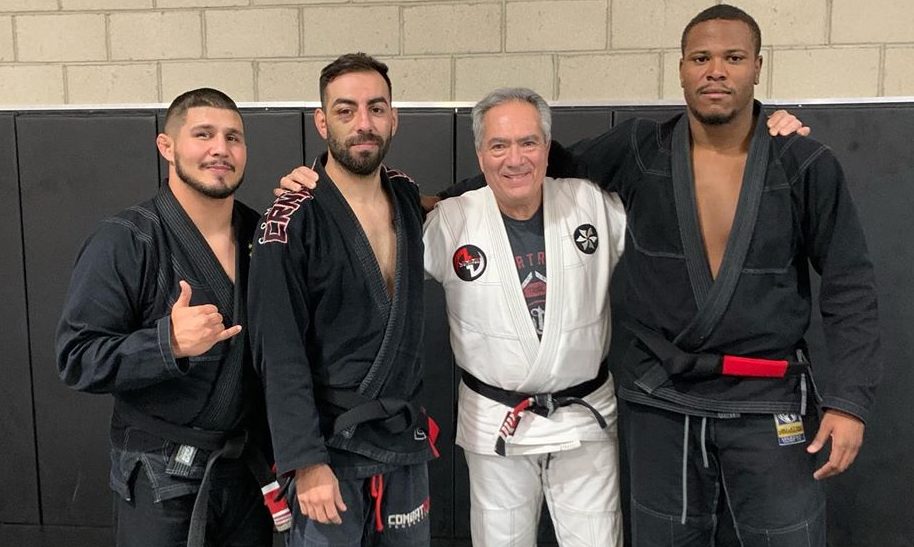 LFA 82’s Jamal Pogues: A Kid From the Hood

People can run from trouble, but sometimes trouble catches up. There are countless stories of individuals that grew up in tough situations, and no matter what they did to get away, their past always seemed to find them.

Jamal Pogues grew up in a rough part of Los Angeles. His family tried to move him away from the area when he was a young teenager, but they were not the only ones with the same idea.

“I started training when I was 13 out of a gym called Universal Grappling Academy in Victorville,” Pogues said. “Then, around 2013, I ended up going to Cobra Kai with Joe ‘Daddy’ Stevenson. He opened a lot of doors for me, and I tried to take advantage of them. That’s why this is like a second chance at life. That’s what I call this fighting.”

Pogues took to martial arts to not only channel his negative energies, but to give him something positive to strive for in life. Over six years ago, when he was barely old enough to have an MMA fight, Pogues made his amateur debut. He went 8-1 before turning pro. In three years, he took his pro record to 6-2, picked up a regional belt, and earned a shot last summer on Dana White’s Tuesday Night Contender Series. The California native put on an impressive performance in front of the UFC boss and won every round to take a unanimous decision over the previously 11-0 Marcos Brigagão. Yet, he apparently didn’t do enough to score a contract.

“I think I did well,” said Pogues. “Honestly, going into that Contender Series fight, I told my coaches that I don’t care about getting a contract or not. I just wanted to put on a show. I let everyone else speak for me. From that fight on, it kind of gave me a chip on my shoulder. I must not be good enough or they would have accepted me. Despite what people may think or say, that’s what I took away.”

Pogues’ style might not be fancy with a lot of tricky moves, but it is one of the most effective. While his background suggests a grinding style, he has actually only been to a decision twice in his pro career. Most of his pro wins have been first-round finishes, including four by knockout.

“When I started at Universal Grappling Academy, it was more of a catch-wrestling style, which is how I got my base for a lot of wrestling and top pressure, and also my submissions,” Pogues explained. “After I went to Cobra Kai, I started working with Joe — and he has some of the best wrestling in the fight game — and I’ve adapted that to my jiu-jitsu. I just received my black belt in jiu-jitsu in December of last year, so I’m just two months into my black belt.”

It’s been six months since Pogues set foot in the cage, but now he is ready to showcase his skills once again. He may not have impressed UFC President Dana White enough to win a contract, but his performance definitely turned the heads of the Legacy Fighting Alliance brass. On Friday night, he will fight for the heavyweight title at LFA 82 in Prior Lake, Minn. It was an invitation he was not expecting.

“First thing in my mind, I was like, ‘Damn, are you serious?’” Pogues admitted. “I couldn’t believe it. I was more shocked than anything. After a couple days, it started sinking in, and I was like, ‘It’s time to work now.’ But, definitely for a couple days, it kind of shocked me. And, I know the respect that title holds from that promotion.”

Pogues’ opponent is Alex Polizzi, who has finished all of his opponents in his combined pro and amateur careers. Polizzi is perfect through five pro outings.

“I know he’s a [NCAA] Division I wrestler,” said Pogues. “From what I’ve seen, I know he’s strong, and he’s going to be a tough fight. That’s what we prepare for. That’s what my camps are for. I’m excited to go against another really good wrestler and test my skills. God willing, I hope everything goes my way on Friday night.”

Pogues has been dedicated to his craft since the day he started training. He keeps a lot of good people around him, and he prefers to be told what he needs to hear, as opposed to what he wants to hear. He sees this as the primary reason for his successes. However, his work ethic cannot be discounted.

“Honestly, I’m in the gym all the time,” Pogues said. “You can ask anybody. When I’m not in the gym, I’m a big fan of video games — and I’m good at it. I spend time with my family and my friends. I’m a friendly guy. At the end of the day, it’s all about family. After that, I’m always in the gym.”

Pogues’ journey is an inspiring one. He climbed out of a low spot to make something of himself, and he’s barely getting started. An LFA title win has almost been proven to be a better avenue to a UFC contract than the organization’s own Contender Series. Too many people have won on that show and subsequently get passed up for a contract, and Pogues is just another name on that list. However, there have been far fewer LFA champs who have not been picked up by the big show.

“I always fought as a kid,” Pogues said. “I could never really control my emotions. I’ve got the regular story of a kid coming from the hood, you know? I found something that could channel my anger, but not only that: I just fell in love with it.

“Man, fighting’s fun. I get to meet these people. I get to do this. I get to travel there. It was just a place to channel my anger, and I fell in love with it.”

The past has shaped Pogues, too.

“It was one of the things I learned from,” he admitted. “Being a young man, it’s still one of those things I’ve got to battle. It’s something I’ve got to deal with. I still did damage to people who do know me, and I know I still have that stigma, and I carry it with me. That’s where I got the work ethic I have. That’s why I have the demeanor I have. It’s a past, but it’s still part of me. I can never erase that. Now, I’m getting ready for this title shot, and on Friday night, everyone will see my work.”