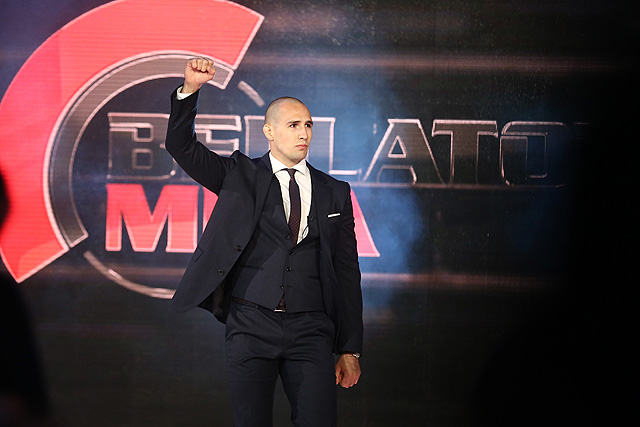 In the main event, former UFC welterweight contender Jon Fitch takes on the reigning Bellator welterweight champion, UFC veteran Rory MacDonald. MacDonald is coming off a loss against Gegard Mousasi in a fight where MacDonald took a step up in weight in an attempt to become a two-division champion, but failed in his bid. Fitch won his Bellator debut against Paul Daley via unanimous decision. Fitch now has five consecutive victories.

Ilima-Lei Macfarlane puts her women’s flyweight title on the line in the co-headlining affair against Veta Arteaga. Macfarlane defended her belt for the second time in her native Hawaii in her last fight, which ended in a triangle-choke victory over UFC veteran Valérie Létourneau. Arteaga is riding a two-fight winning streak that includes victories over Emily Ducote and Denise Kielholtz.

Jon Fitch has not lost a fight since 2014. Can he maintain that streak when he challenges Rory MacDonald for the Bellator welterweight title?

There is a chance, but it is slim to none. Fitch may not have lost a fight in well over four years, but he has only fought five times in this span. His victories came over the likes of Yushin Okami, Jake Shields and Paul Daley. These are some good veterans, but nobody at the level of MacDonald.

MacDonald has also fought sparingly over the past few years. The Bellator welterweight champ has made three appearances with the promotion and won two of those fights. He will be looking to bounce back from a loss against Gegard Mousasi where he stepped up to the middleweight division. Mousasi was able to dispatch MacDonald in the second round.

Fitch isn’t going to be able to do the same to MacDonald. Fitch fights a very safe game in every outing. He will seek to bring this fight to the ground and use his wrestling to ride out a decision victory. It’s Fitch’s bread and butter, and remains the reason why he has been so successful over the course of his career and continues to fight at age 41. Fitch doesn’t take a lot of punishment, but if he can’t bring the fight to the ground, there really isn’t another avenue for success for him.

MacDonald has a clear edge in every area, and this even includes the grappling department. He is a tough out for anybody, and it’s hard to see Fitch being the type of fighter to do stop MacDonald. The fight will be contested on the feet, and the champion will retain his crown.

Bellator women’s flyweight titleholder Ilima-Lei Macfarlane puts her belt on the line against Veta Arteaga. Will Arteaga score the upset?

This is another fight where the champion will retain. Macfarlane is on another level compared to most fighters in her division, including Arteaga.

Macfarlane is coming off a win over Valérie Létourneau, who easily stands as Macfarlane’s toughest test to date. Macfarlane was slow out of the gate against the UFC veteran, but she eventually picked up the pace midway through the fight. It didn’t take long from there, after a few takedowns and scrambles, for the champion to submit Létourneau in the third round. It was a dominant performance for Macfarlane.

Arteaga has had an up-and-down Bellator tenure. She has gone 4-2 during her time with the promotion. Her two losses were close fights that ended in split decisions against Anastasia Yankova and Bruna Ellen.

Macfarlane is a higher form of competition than either of the ladies who have defeated Arteaga in the Bellator cage. Macfarlane has displayed great ability, both on the feet and on the ground, which makes for quite a dangerous opponent. There is no spot where Arteaga conceivably has a large advantage. It’s an uphill battle for Arteaga. This fight absolutely favors the champion.

The Bellator 220 lineup also features UFC veterans Phil Davis and Benson Henderson in separate fights. Which of these men will have the better showing on Saturday night?

Henderson has been something of an enigma with Bellator. He came over as the former UFC lightweight champion and one of the best fighters on the planet. However, Henderson has slipped quite a bit, going just 3-3 in the Bellator cage. He has changed his fortunes in his last two fights against Saad Awad and Roger Huerta, but that pales in comparison to the top talent he was facing and couldn’t navigate past in the start of his time with the promotion.

This means the odds lie with Davis to put on a better showing. It won’t be a fan-friendly display, but it will be a good, dominant performance that shows why Davis is still one of the best fighters in the promotion.

Liam McGeary is a good opponent for Davis. The Brit is a former Bellator light heavyweight titleholder. He has fought four times since he last faced Davis, but he has gone just 2-2 in this span.

The same fight that happened in 2016 will play out again in 2019. McGeary struggles mightily against wrestlers. Davis is going to look to exploit this weakness once more and absolutely negate anything McGeary tries to get going. It will be a smothering performance and an overwhelmingly dominant outing for Davis.

Nallo is undefeated in his young career, which includes a 2-0 run in Bellator. Both of those fights ended in knockouts. Nallo is a great fighter to watch. He is very creative in how he strikes, and he can end the fight with either a knee, a kick or his hands. It will be interesting to see if he does finish Mohammed. Mohammed is also a proven finisher. He has another opportunity for a stoppage against another fighter who will go for broke.