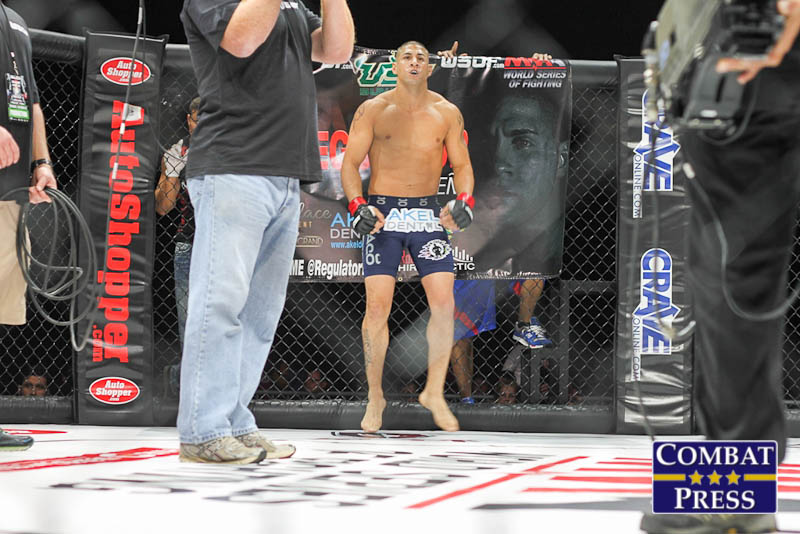 Picture this: You’re 32 years old. You’ve been a pro MMA fighter for 10 years. You are in the ring, with a record of 12-6 and riding a two-fight winning streak. You’ve paid your dues on the local circuit and have fought in M-1 and the World Series of Fighting. You’ve beaten former UFC and Bellator fighters and you’re in the middle of your biggest fight of your life. You go to throw a punch, pivot, and pop. There goes your ACL. What do you do?

You could give up. Mobility and quickness are of utmost importance when you’re in the cage with a top-level fighter.

Or, you continue fighting, throw hard, and score the second-round TKO.

Reggie Pena took the latter path and finished Sabah Homasi, a former Bellator fighter who, by the way, has gone on to fight in the UFC. That’s where Pena was likely headed before that pop.

Injury. Fighters take a chance every time they train, spar and especially every time they fight. It’s pretty much inevitable for lifelong athletes to face some injuries during their career. Pena has been in combat sports since he was 11. So, after 21 years of training and competing, he was faced with a decision: Retire or fight?

Since you’re reading this, you can probably figure out which he chose. But think about the strength of spirit and mind that it took Pena, at age 32, to rehab and get back to the best shape of his life.

Let’s start near the beginning. Pena’s father was 50 when Pena was born, so his dad wasn’t really playing catch with him in the yard too much. Meanwhile, his mom was a “hard-ass from the Bronx.” Reggie was the only boy. He was starting to get into trouble at school because he was temperamental and dealing with some anger. This is when he found the Springstead High youth wrestling program. The program had been there for years, thanks to Springstead’s legendary coach, Bob Levija.

“[Springstead coaches] Chris Soto and Luis Kachiroubas were so impactful in my life,” Pena told Combat Press. “They helped me control the anger and learn discipline. They were a big influence, and the youth program is what led me to success at Springstead High.

“I was varsity all four years there, and that’s how I met Corey Hill. He was older than me, so when he was in high school, I was just a kid. He would work with us, and he would teach me moves and little tricks. We remained close throughout the rest of his life. In fact, I was the one who got him into MMA. He was wrestling in college, but after that he never found anything else that he was passionate about, not like wrestling, until I got him to come train with me. He went on to lie his way onto The Ultimate Fighter [laughs].”

Of course, Hill hadn’t even taken a fight yet, but he told the TUF producers something else. He went on to fight Nate Diaz in the TUF 5 finals and very nearly beat him. After a devastating leg injury during a UFC fight, Hill was never quite the same. Sadly, he died last year quite unexpectedly.

“We were close — really close,” said Pena. “He helped me get ready for fights and would push me, especially during morning sprints. I remember trying to catch up with him. We’d go five hard rounds and I’d feel like I was dying, trying to catch my breath. But he was there to push me.

“During this fight camp, especially during sprints, I feel him. Well, I don’t know if it’s God or him or my subconscious, but it feels like he is right beside me, especially when I’m exhausted. It makes me push through the pain and through the tough spots. I know that in the last round, or if it gets tough, that in my next fight he will be pushing me to finish strong.”

Pena’s next fight takes place on Saturday, Aug. 19, in Tampa, Fla., for the V3Fights organization. It will have been two years and four days since his last bout, which came against the aforementioned Hamasi.

“It’s a been a long recovery, very long,” said Pena in a matter-of-fact voice. “The physical aspect was one thing, but it’s taken a while for the mental aspect. It’s taken a while for me to trust that my knee is strong enough to take punishment and to do what I want to do. Now? I am stronger than ever and I’m ready.”

His opponent will be Rashaun Spencer, a 13-6 fighter, just like Pena.

“My opponent is bigger, no doubt. He is a 185-[pound]er who also fights at 205, when I am a 185er who also fights at 170,” explained Pena. “So, yeah, he’s got the size advantage and he is younger, but that’s all he’s got. Everything he does, I do better. He won’t show my anything I haven’t seen before. I beat Clayton [McKinney] and John Salter, and I’ve faced some of the toughest guys.

“He has beaten some tough guys, so I don’t take him lightly. Anything can happen in MMA, and I know to be ready. I’m not going to fall into his traps. He thinks he is going to knock me out fast, and I can tell you that’s not going to happen. It’s going to be a hard fight, and I’m preparing for a war, but if the fight stops early, it’ll be because I stopped him.”

Pena has a reputation of taking part in the “Fight of the Night,” and with good reason. He fights with skill and precision, to be sure, but he also has that certain something. It’s what people call “heart.”

“Yeah,” Pena said with a laugh. “I like to leave it all in the cage, and I think fans can tell. They like to watch me perform, because they know I’m going to give 120 percent every time I get in the cage. Plus, everyone loves the underdog, and I have never shied away from a fight. I’ll fight the top guns and I will give it my all.

“I wanted to get into boxing, so I did. Here I was, a former wrestler turned MMA fighter, and wanted to box. But you can’t fight amateur boxing if you’re a pro MMA fighter. I was doing alright when I got tossed in the ring with Deontay Wilder.”

Wilder is the WBC heavyweight champion. He is 6-foot-7 and highly skilled.

“Luckily for me, that fight didn’t go too long,” joked Pena. “But the whole time I was in there, I kept thinking, ‘I could take this guy down,’ and, ‘I’d love to kick those little legs.’ And, hey, everyone is all excited about MMA versus boxing, so I want to continue calling Wilder out — hey Deontay, I was man enough to get into the ring with your world-class self. Let’s get into the cage and see if you can compete.

“You know, he is a seven-footer [laughs], but he doesn’t know what it’s like to check leg kicks or deal with elbows and knees. He is used to dancing around the box, holding and clinching. What can he do to prepare for a guy like me?”

Preparation. It’s something Pena knows a lot about. In wrestling, he prepared for hours at a time, drilling moves and techniques. It’s one of the reasons so many former wrestlers make great MMA champs. Pena’s preparation hasn’t slowed down as a mixed martial artist working at Champions MMA under head coach Ross Kellin.

“I was fighting in a smoker at a bar. Me, a former wrestler, against a Muay Thai guy,” said Pena. “Ross said he wanted me on his team, so I came to his gym. He took me to a whole new level. He has built a family atmosphere. We all care about each other. It’s family oriented, and loyalty is big there, to each other and to the team. He trusts us to train at other places. He isn’t the guy who locks you in. I live an hour away, so he works with me.

“I train with him and I also train at Hurricane Sammy’s, a boxing gym closer to the house. And I love that flexibility and willingness to do what’s right for me. When I make the jump to the UFC or whatever next level, I want Ross in my corner.

“All my coaches and training partners are excellent. Gary at Hurricane Sammy’s. Mike Morris, one of my best friends and training partners — we would spar in his garage gym. Well, we called it sparring, [but] everyone else called it fighting. That was before we knew that it was wiser to train with head gear and to go a little lighter than in a real fight. We’d be bloody at the ‘Muay Thai House.’ All these guys make me better and have improved my game. It’s time for me to go out there and show the world what I’ve learned and what I’m made of.”