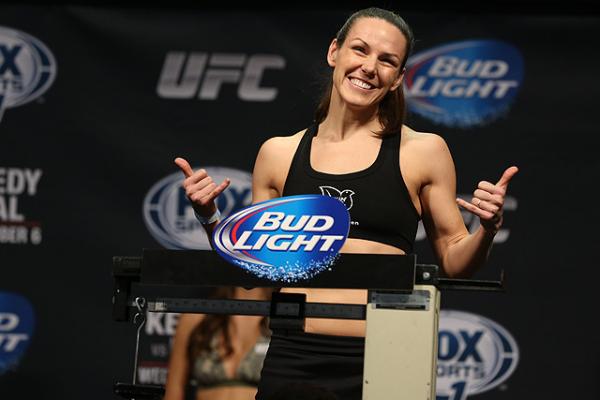 With an assist from Cat Zingano, Alexis Davis came to terms with her title-fight loss to Ronda Rousey and is ready to work her way back into title contention.

Davis is scheduled to meet Sarah Kaufman in a women’s bantamweight tilt at UFC 186 on April 25 at the Bell Centre in Montreal. Given that Kaufman, the former Strikeforce champion, is 2-0-1 since entering the UFC, Davis has a chance not only to avenge two previous losses to her fellow Canadian, but also vault herself back into the line to face Rousey.

Her last time in the Octagon was for the title, but Davis lasted just 16 seconds against Rousey at UFC 175 in July 2014. The loss made her question where she went wrong, and it made her wonder how she could suffer a loss in such dominant fashion when she is touted as one of the best female mixed martial artists on the planet. But when she watched Zingano get submitted in 14 seconds at UFC 184 by the 2007 Olympic bronze medalist judoka, it triggered a series of emotions and realizations.

“A lot of things went through my head,” Davis told Jason Kelly and Joe Rizzo on Rear Naked Choke Radio. “First of all, my heart went out to her because it’s like, ‘I know. I’ve been through that.’

“But, you know, I hate to say it, but it was almost kind of like a little relief for me because it was like, ‘OK, someone else went through it, too. It wasn’t just me.’ It can happen to anybody and that’s the thing, facing somebody like Ronda.”

It was a surreal experience for Davis, who likened watching Zingano’s title hopes extinguish a moment after they started to an oft-mocked standard movie scene in which the protagonist is experiencing a flashback, screaming “NOOOOOO” during a slow-motion montage.

“It was kind of like she made the same mistake I did, whereas she went out and wanted to start off strong and kind of went right for it,” Davis explained. “I think the people that were more successful with Ronda were the ones who kind of waited for that space and were more hesitant about it.

“She’s getting stronger and stronger with her game. I’m hoping we see the chance to have somebody — hopefully me, I say in the back of my head — and see someone who can give her a fight and be able to take her down.”

Since losing to Rousey, Davis has been taking advantage of the time off by frequenting Northern California gyms such as Combat Sports Academy and Team Alpha Male. While improving her skills over the past seven months, the Cesar Gracie BJJ black belt was in search of her next opponent. When Kaufman became an option, Davis accepted the challenge — with good reason.

Davis’s pro MMA debut was a unanimous decision loss to Kaufman in 2007. Davis was presented with the opportunity to avenge the loss five years later at Strikeforce: Tate vs. Rousey, but fell short again, losing via majority decision.

In addition to Davis getting an opponent she wanted, the city hosting UFC 186 is close to home for the Niagara Falls, Ontario native.

“For me, this is a bonus. I get a chance to kind of get my revenge on Sarah. We all know it’s going to be a good fight and I really wanted to hit this card because this is close to where I’m from. It’s a six-and-a-half or seven-hour drive for my parents, so it’s really close to my hometown and I’ll be able to go back after the fight and see my parents after we return from Montreal.”

Since Davis defeated Jessica Eye at UFC 170 in February 2014, she has only seen those ill-fated 16 seconds of cage time, which is odd for her. Prior to her current layoff, Davis’s longest was seven months, plus, her average cage time per fight is 9:44. It is not the norm for her to be out of competition for this long.

Being schedule-oriented by nature, Davis was back to her regular routine in the gym two weeks after her bout with Rousey. She ensured her time away was beneficial and expects a better outcome against Kaufman in their third meeting, with the hopes a victory will catapult her back to the No. 1 contender spot.

“I’m getting older by the day,” the 30-year-old Davis said half-jokingly. “I need to get back in there. I’m going to work on myself as much as I can, and I don’t want to take those breaks into fights. And if I have them, I’m going to make good use of it.”

Davis acknowledged that she is hearing some of the negative sides from fans and media about having a trilogy fight with Kaufman, but nonetheless sees the big picture.

“This is very fortunate,” she said. “But for me, it’s a great opportunity. I obviously know Sarah Kaufman and how strong of an opponent she is. She’s ranked in the top five in the division, just like me. I mean, what better fight for either one of us to get back up in title contention?”

Davis can finally move on. Thanks, Cat.