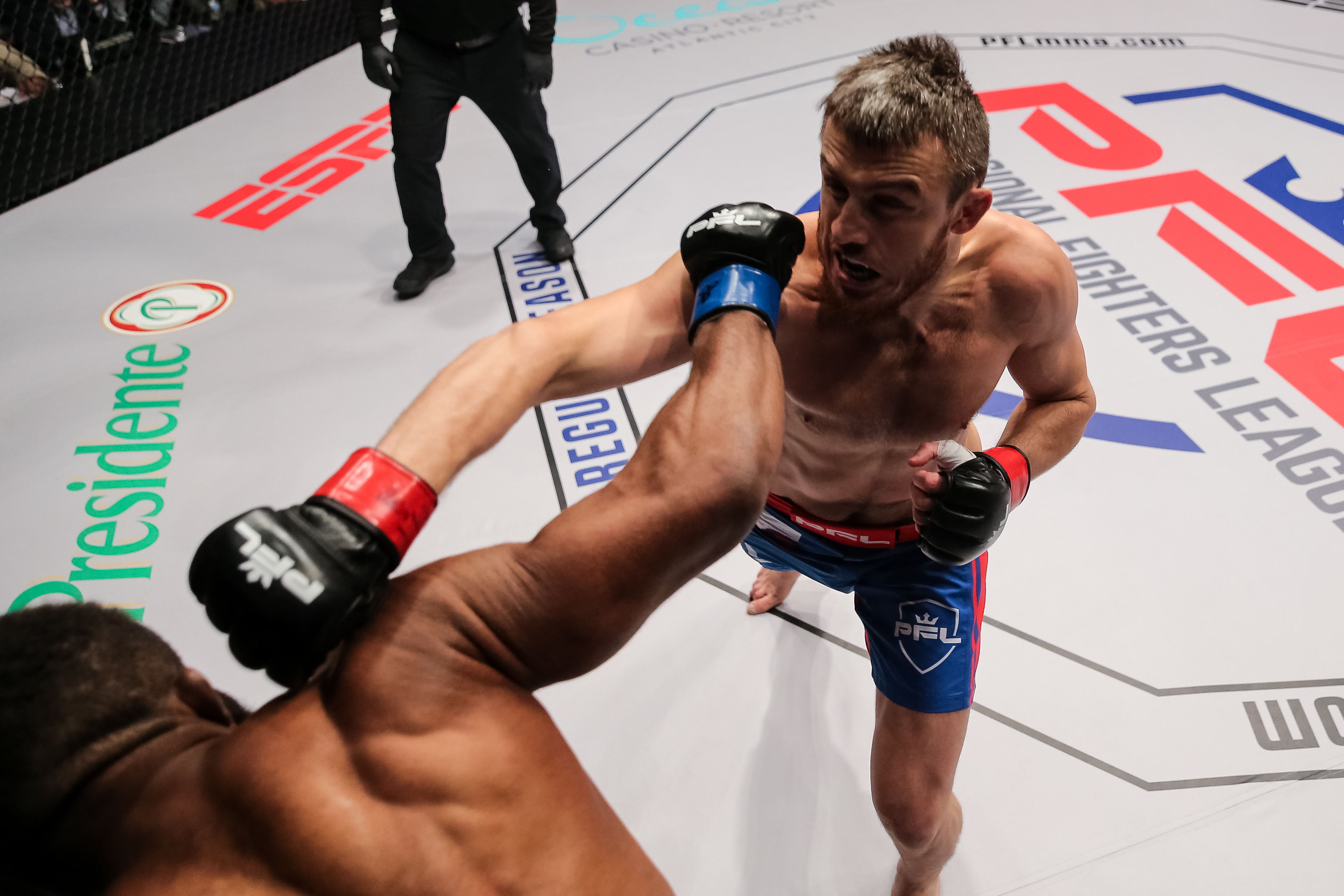 The 2019 season for the Professional Fighters League continued last night in Atlantic City, N.J., where the lightweight ladies and welterweight men got in their second — and final — fights of the regular season.

The PFL’s season format includes standings that determine which fighters make it to the playoffs. Extra points go to competitors who score finishes. Of course, not every win is equal, nor is every loss. While the playoff qualifiers are now known, we here at Combat Press intend to provide deeper insight to how these fighters looked in individual fights and how it projects on their progress through the season.

1. Kayla Harrison (2-0, 9 pts, No. 2 playoff seed, Previous power ranking: 2): The PFL built the women’s lightweight field around this former Olympic gold medalist judoka. Harrison was disappointed with her performance in the season opener against Larissa Pacheco, but she turned up the heat in her second fight and thoroughly destroyed Morgan Frier. Her strong showing is a huge boost to her momentum, carrying her into the top spot in our power rankings.

2. Sarah Kaufman (2-0, 9 pts, No. 1 playoff seed, Previous power ranking: 1): Well, that was disappointing. Kaufman, who easily disposed of Morgan Frier in her first fight of the season, didn’t even take to the cage for a second regular-season outing. It wasn’t the Canadian’s fault, though — her scheduled opponent, Roberta Samad, missed weight. Kaufman takes a walkover victory and three points to secure the top seed in the playoffs. She’s still in a strong position heading into the postseason, but her absence from action hurts her standing in these power rankings.

3. Larissa Pacheco (1-1, 6 pts, No. 4 playoff seed, Previous power ranking: 5): The 24-year-old Brazilian, a UFC veteran and The Ultimate Fighter alum, gave Kayla Harrison some headaches earlier in the season before ultimately suffering a loss. In her second appearance of the season, she was able to dash the playoff aspirations of Bobbi-Jo Dalziel. The combination of these two performances makes Pacheco the most likely spoiler to a finals showdown between Harrison and Sarah Kaufman. Pacheco’s seeding puts her in line to meet the latter of those powerhouses in the semifinal round of the playoffs.

4. Genah Fabian (1-1, 6 pts, No. 3 playoff seed, Previous power ranking: 4): The decorated Muay Thai practitioner has made the most of her return to MMA after a near four-year absence. She looked strong in defeat against Bobbi-Jo Dalziel earlier in the year, but it was her stellar finish of Moriel Charneski that put her over the top and secured her a playoff spot. Fabian’s seeding puts her in line to fight Kayla Harrison next, though, so her success could be short-lived.

5. Bobbi-Jo Dalziel (1-1, 3 pts, No. 6 in standings, Previous power ranking: 3): The 33-year-old managed a hard-fought victory over Genah Fabian earlier in the season, but she drops the farthest in the power rankings after an extremely disappointing outing against Larissa Pacheco. Dalziel, who appeared to be a threat to the big players in this field, couldn’t even make it a full round before falling victim to an armbar from Pacheco. The loss leaves her outside the playoff group.

6. Roberta Samad (1-1, 3 pts, No. 5 in the standings, Previous power ranking: 6): Fans were robbed of a Sarah Kaufman fight thanks to Samad’s inability to make weight. This comes on the heels of an underwhelming showing in a victory over Moriel Charneski earlier this season. Samad may have finished fifth in the standings and just barely outside of the playoff group, but she hardly looked worthy of a postseason berth at any point in 2019.

7. Moriel Charneski (0-2, 0 pts, No. 7 in the standings, Previous power ranking: 7): Charneski, who held her own against the rusty Samad earlier in the year, made weight for her second fight, which is more than can be said for her previous foe. All Charneski would have needed to overtake Samad in the power rankings was to survive beyond the first round and post some offense against Genah Fabian. Unfortunately, none of this occurred. Instead, Charneski was bulldozed by the Muay Thai practitioner.

8. Morgan Frier (0-2, 0 pts, No. 8 in the standings, Previous power ranking: 8): Frier was definitely the punching bag of this field of lightweight ladies. First, she was paired with Sarah Kaufman. Next, it was Kayla Harrison. Both stars scored early submission finishes of the outgunned fighter.

1. Magomed Magomedkerimov (2-0, 9 pts, No. 2 playoff seed, Previous power ranking: 1): The 2018 champion didn’t score the finish over Chris Curtis like he did against John Howard earlier this season, but the Russian still dominated the boxer en route to a lopsided decision nod. The 29-year-old remains the man to beat at welterweight, and Curtis will get another shot at doing so when the two men meet in the quarterfinal round of the playoffs.

2. Glaico França (2-0, 10 pts., No. 1 playoff seed, Previous power ranking: 4): França has emerged as another standout in this field. After washing out of the UFC as a lightweight, the Brazilian has looked strong at 170 pounds with the PFL. He put up a strong showing against the formerly undefeated Gamzat Khiramagomedov for a first-round submission finish. França stole Sadibou Sy’s momentum in Atlantic City, spending much of the second and third rounds on top of the Swede before scoring a late ground-and-pound finish. The Brazilian will meet Andre Fialho in the quarterfinal round of the playoffs.

3. John Howard (1-1, 6 pts, No. 4 playoff seed, Previous power ranking: 11): Howard, a member of last season’s middleweight group, can be forgiven for his ugly showing against Magomed Magomedkerimov. Not many people have fared well against the Russian, after all. The UFC veteran redeemed himself with a first-round steamrolling of Ray Cooper III, a breakout fighter from the 2018 season. Howard will likely struggle against strong grapplers, but his knockout power is always a game-changer. His first postseason pairing? David Michaud, who has already suffered a 17-second knockout this year.

4. David Michaud (1-1, 6 pts, No. 5 playoff seed, Previous power ranking: 12): What a way to reverse one’s fortunes! Michaud had to find a way to rebound from a 17-second knockout loss to Sadibou Sy, and he responded by dusting Handesson Ferreira in the first round. Michaud did have to suffer through an eye poke and a groin shot, plus Ferreira having the upper hand prior to Michaud’s closing salvo. Michaud somehow makes it into the playoffs right where we predicted: in the middle of the pack. If you’re wondering whether Michaud can avenge the loss to Sy, well, it can happen, but both men will have to advance to the finals to make it a reality.

5. Sadibou Sy (1-1, 6 pts, No. 3 playoff seed, Previous power ranking: 2): Sy, who competed as a middleweight in the 2018 season, has to ride the momentum of that 17-second knockout of David Michaud earlier in the season. The Swede certainly didn’t add to it in his second fight of the 2019 campaign. Instead, Sy was controlled on the ground for much of his scrap with Glaico França, who eventually found a ground-and-pound stoppage late in the fight. Still, Sy enters the postseason as the third seed and draws Ray Cooper III in the quarterfinals.

6. João Zeferino (1-0, 3 pts, No. 10 in the standings, Previous power ranking: unranked): Zeferino won’t make the playoffs, which is a shame. The Brazilian’s 2018 season was cut short when he was forced to withdraw from the playoffs with an injury. In 2019, he only managed one regular-season appearance, and his decision nod over Bojan Velickovic wasn’t enough to secure him a spot in the postseason. The Brazilian has never lost a regular season PFL bout (PFL Daytona was not part of the season format), but he has yet to make a playoff appearance. There’s always next year, right?

7. Ray Cooper III (1-1, 5 pts, No. 6 playoff seed, Previous power ranking: 3): The Hawaiian dispatched of his second cousin, Zane Kamaka, earlier this season, but he wasn’t as lucky in his second fight of 2019. Cooper was destroyed by UFC veteran John Howard. Of course, last season’s runner-up still has a spot in the playoff bracket.

8. Chris Curtis (1-1, 4 pts, No. 7 playoff seed, Previous power ranking: 5): Curtis, a CES MMA regular and Dana White’s Tuesday Night Contender Series alum, put on a stellar boxing display against Andre Fialho to open the season, but the southpaw couldn’t deliver an encore when he fought 2018 champ Magomed Magomedkerimov in Atlantic City. The Russian dominated Curtis in all areas, and Curtis has to suffer through another meeting with the top welterweight in the quarterfinals of the postseason.

9. Andre Fialho (1-1, 3 pts, No. 8 playoff seed, Previous power ranking: 8): Fialho has made it to the postseason, but he hardly scorched the competition on the way there. Instead, he was outworked on the feet by Chris Curtis for a loss to open his 2019 campaign and then grabbed three points on a walkover victory when his scheduled foe, Zane Kamaka, missed weight. Colored us unimpressed thus far.

10. Handesson Ferreira (1-1, 3 pts, No. 9 in the standings, Previous power ranking: 6): Ferreira’s follow-up to a hard-fought decision over Bojan Velickovic? A stoppage loss to David Michaud. Ferreira was in control for much of the fight, but he got caught. The bigger blow, however, was that the defeat put the Brazilian just one spot outside of the playoff field.

11. Bojan Velickovic (0-2, 0 pts, No. 11 in the standings, Previous power ranking: 7): The Serbian fighter followed his 1-2-1 2018 campaign with an 0-2 skid in 2019. Velickovic proved to be a hard out for both Handesson Ferreira and João Zeferino, but he emerged on the wrong end of the scorecards in both fights.

12. Gamzat Khiramagomedov (0-1, 0 pts, unranked, Previous power ranking: 10): The 25-year-old Russian turned into Mr. Invisible in the 2019 PFL season. He entered the season as an undefeated stud, but he suffered a loss to Glaico França and then bowed out of the competition with an injury. The combat-sambo specialist wasn’t even listed in the PFL’s final regular-season welterweight standings.

13. Zane Kamaka (0-2, 0 pts, No. 12 in the standings, Previous power ranking: 9): The Hawaiian was a huge embarrassment in the 2019 campaign. He missed weight for his fight with second cousin Ray Cooper III, who ended up starching Kamaka. As if that wasn’t bad enough, Kamaka again came in heavy and forfeited his fight with Andre Fialho in Atlantic City.