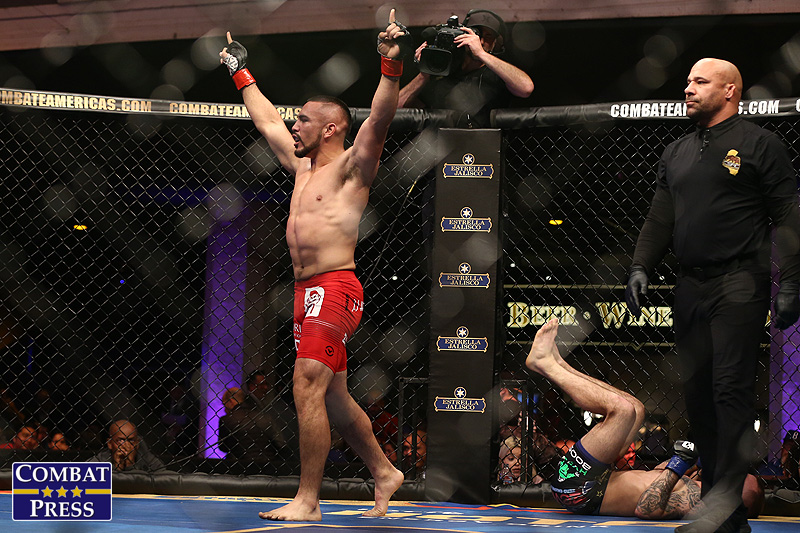 The last time we checked in with top prospect Rafa Garcia, Combate Americas was giving him what seemed like a showcase fight against 5-2-1 fighter Edgar Escarrega. Garcia won the fight via rear-naked choke. Now, at the 39th event from Combate, our prediction that Garcia would see a jump in competition has come to fruition. This time, the lightweight stud has been paired with UFC veteran Estevan Payan.

The 24-year-old Garcia, who was introduced to MMA at age 13 by his father, debuted in 2014 and picked up four wins before joining the Combate roster via the league’s open tryouts. His promotional debut came in early 2017 when the “Gifted” one needed just 64 seconds to find a heel hook for the submission victory over Raúl Najera Ocampo, who had entered the bout as a 4-1 prospect. Garcia, who has a background in high school and college wrestling, continued his run with a second-round submission of .500 fighter Marcos Bonilla and a majority decision over Chase Gibson. Over his last two fights, the Team Punisher fighter added a first-round knockout of Bellator and World Series of Fighting veteran LaRue Burley and the submission of Escarrega.

Payan, 37, made his professional MMA debut in 2007 and compiled a 6-1 mark before appearing on Bellator’s inaugural show. “El Terrible” went just 1-1 with Bellator, but he did beat Luis Palomino during his time with the organization. Another regional run followed, raising Payan’s record to 12-3 before he joined Strikeforce. He won both of his Strikeforce outings and then transitioned to the UFC, where he suffered three losses before he was axed. The misfortune he experienced in the Octagon has largely followed him beyond its confines. He has managed a horrible 3-6 record over his last nine fights, including stops in Bellator, Titan Fighting Championship and the World Series of Fighting. Payan has also taken detours into the worlds of boxing and its bare-knuckle sibling.

Payan’s UFC credentials are enough to make him an upgrade from Garcia’s last opponent, but the UFC veteran’s ugly record over the last six years suggests that he’s another sacrificial lamb sent to the slaughter. The Arizona Combat Sports product has lost to some strong competition, including Jeremy Stephens, Robbie Peralta and Kyle Stewart, but he has also stumbled against such unheralded fighters as Raymond Pina and Jose Luis Verdugo. The Army veteran is a surprisingly tough out on the mat, but his chin has failed him on seven occasions.

Garcia has a plus ground game and the wrestling skills to easily plant most opponents on the mat. However, he’ll give up several inches in height and four inches in reach to Payan, who can certainly do damage on the feet. Payan also provides Garcia with an extraordinary challenge on the ground, where the UFC veteran has never been tapped. Garcia does have one finish via strikes, but he really hunts for submissions. If Garcia can’t find an armbar or a choke, he might get frustrated and make mistakes that cost him the fight.

Payan’s recent history is a huge factor in this contest. The Arizona native has had very little luck since his horrendous UFC run. He was finished in just 39 seconds by an opponent who only had seven pro fights and barely a winning record to show for it. It’s a fair bet to say he’ll last longer against Garcia, who isn’t known as a knockout artist, but Payan is still likely to get outpointed by the strong wrestler.

If there’s one division in which the Legacy Fighting Alliance might be able to retain a champion rather than losing them to the UFC, it’s the men’s flyweight division. The UFC seems to have lost interest in what’s actually an exciting weight class, but its loss is the LFA’s gain. Exhibit one: the flyweight championship showdown between titleholder Maikel Pérez and challenger Brandon Moreno. How is this not a UFC bout?

Pérez claimed his crown with a finish of Sid Bice more than a year ago at LFA 37. He had a bout with Casey Kenney scrapped in November and opted to try his hand at grappling in late May at the Combat Jiu-Jitsu Worlds 2, where he faltered against Marcelo Cohen. The 36-year-old former Olympian wrestler made his first foray into MMA in 2016 with LFA’s predecessor, the Resurrection Fighting Alliance. After two submission wins, he joined the LFA, where he lost his promotional debut to Adam Martinez. The Cuban fighter recovered nicely to the tune of three victories before clashing with Bice for the belt.

Mexico’s Moreno is a far more familiar name to American fight fans. The 25-year-old is a product of The Ultimate Fighter 24, where he lost his lone bout to flyweight standout Alexandre Pantoja. The UFC retained Moreno after the reality show, and he went on to post a surprising trio of victories over Louis Smolka, Ryan Benoit and Dustin Ortiz to put his name into the title discussion. However, subsequent losses to Sergio Pettis and Pantoja took the shine off his name. Moreno also took a turn in the grappling world recently when he won two of three matches in February at Combat Jiu-Jitsu Fight Night. Moreno, who debuted in 2011, tends to be a grinder, but his style usually paves the way to a submission finish.

Moreno is not the type of fighter the LFA typically gets its hands on. The promotion deals primarily in prospects and veterans looking for their shot at the big show, and not an established, arguably top-10 fighter. His arrival could spice things up for one of the few homes to the 125-pounders. It also provides others, including Perez, with an immediate chance to prove they are UFC material — well, assuming they’re willing to move up a weight class.

Perez has been a solid prospect for the LFA, but his loss to Martinez is troubling. Martinez has been unspectacular at both the amateur level, where he suffered three losses through 10 contests, and the pro ranks, where he stumbled against Andrew Tenneson and Anthony Birchak. Moreno isn’t going to drop Perez with strikes, but his strong wrestling and clinch work, combined with the experience he’s built while facing some of the world’s best, is more than enough convincing evidence that Moreno is the clear favorite here. He’s submitted some big names, and Perez could be the next man on his list.

If you thought the flyweight men were lacking in supportive organizations, just wait till you get a look at the male strawweight landscape. ONE Championship is the pinnacle destination for the 115ers, but the Asian league’s weigh-in rules really lead to these men fighting at flyweight. The only other home for the diminutive fighters can be found in Japan, which actually embraces the weight class. Shooto’s Gig Tokyo Vol. 27 show plays host to two veteran fighters whose records might not turn heads, but these guys could still be in or near the top 15 of the division. We’re talking about Takamasa Kiuchi and Tateo Iino.

Despite a dearth of quality strawweight men in MMA, the 26-fight veteran Kiuchi has yet to land in a championship tilt. Instead, he’s been a regular for Shooto, Pancrase and ZST since his 2010 pro debut. He has seen some notable opponents in this stretch, though. He engaged in an early trilogy with Sota Kojima that ended with each fighter claiming a victory after the first affair ended in a draw. The “Skinny Zombie” has also tangled with Takeshi Kasugai, Hiroyuki Abe and Ryuto Sawada. The 32-year-old has also fought his current nemesis, resulting in a first-round guillotine-choke submission of Iino at Shooto Infinity League 2016 Final. The finish is one of eight career submission victories for Kiuchi.

Iino has a somewhat shorter record, but he holds a slightly better winning percentage. “Jet” has been far more loyal to Shooto since the beginning of his career in 2012. He debuted with Grachan, but jumped to Shooto by his second fight. He has only ventured outside of the promotion for one fight since. The 33-year-old has also locked horns with the aforementioned Sawada, and he has also shared the ring with Ryohei Kurosawa on two occasions. Overall, though, Iino has not seen nearly as consistent a stream of quality opposition as his counterpart. He’s a decision machine, but he has finished three fights via submission and three by way of strikes. He has also tapped out on two occasions.

The disparity in levels of competition is already an indicator that Kiuchi should be favored here, but we also have further proof thanks to Kiuchi’s prior victory over Iino. “Jet” didn’t even last two minutes before he was trapped in a guillotine choke. Kiuchi has found a lot of success with submissions throughout his career, so the finish can hardly be considered a fluke.

Neither of these men should be considered among the elite, but this is a shallow division where even someone of Kiuchi’s pedigree could land in a championship at any time. He’ll add to his resume with a second tapout of Iino this weekend.