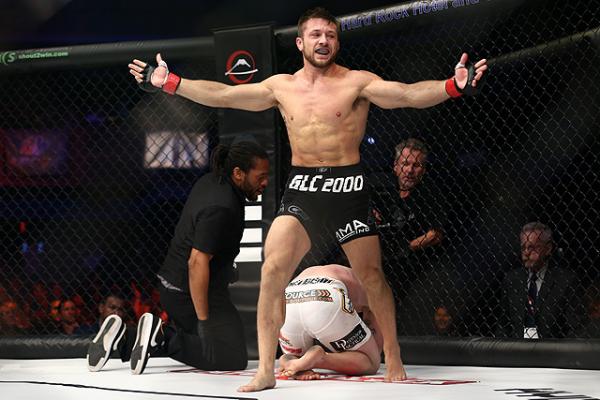 Earlier this month, the Professional Fighters League kicked off its 2019 season with a lineup full of lightweight ladies and welterweight men. In the league’s second effort of the season, the featherweight and lightweight men take to the cage in an effort to make a big first impression.

As with the promotion’s first 2019 show, this event takes place at the Nassau Veterans Memorial Coliseum in Long Island, N.Y. The show kicks off on Thursday, May 23, at 7 p.m. ET with four fights on ESPN2. The remaining eight contests air live on ESPN+ at 9 p.m. ET.

Can Lance Palmer repeat as the featherweight champion in a field that includes all of last season’s final four?

Palmer has to survive in a rather stacked division, and he’s far from a sure thing. The 32-year-old has losses to two of last year’s semifinalists — Andre Harrison and Alexandre Almeida — and he has been known to take part in close fights, even if he ultimately has his hand raised. Palmer does seem to have fellow finalist Steven Siler’s number, though, and he did avenge the losses to Harrison and Almeida. This shows the somewhat unpredictable nature of MMA, where the pendulum could swing back in favor of his opponent at any moment. However, he has to be the front-runner in this pack.

Palmer draws a tough PFL newcomer for this show. Alex Gilpin enters the season following a Contender Series victory over JR Coughran that somehow failed to net him a UFC contract. The 27-year-old is a former featherweight champion in The Chosen Few organization, but his most notable wins have come against fellow up-and-comers like Nate Jennerman and the aforementioned Coughran. He also suffered a split-decision loss to current UFC fighter Dan Moret.

Gilpin can be a dangerous finisher, but he could be out of his depth against his Team Alpha Male foe. Palmer has a strong wrestling base and submission game, plus plenty of experience against tough competition. Palmer is likely to rely on those tools to work his way to a unanimous decision here and continue to pace the field.

Natan Schulte, last season’s lightweight champ, anchors the ESPN2 prelims of this event opposite Bao Yincang. Will this be an easy first win for Schulte to kick off the 2019 season?

Schulte didn’t have quite the same smooth ride to a title that Palmer enjoyed — Schulte’s playoff run included a majority draw against Johnny Case and a split nod over Chris Wade — but he performed well during the regular season, with wins over Wade and Jason High. This season figures to feature an even better start for the returning champ.

That’s because Schulte’s opponent, Yincang, is far from the top tier of this group. The Chinese fighter already has seven losses through 20 fights, including defeats in three of his last four appearances. Yincang is likely to be the underdog in almost any pairing he sees during the regular season.

Schulte has some questionable losses on his resume, but those came in the embryonic stages of his pro career. He’s only suffered one defeat through his last 16 outings, and it came to Islam Mamedov, a very talented prospect, under the WSOF banner. Mamedov is in the current field, and so are several other big threats to Schulte’s chances of a repeat. Yincang, however, is not one of those threats.

The 25-year-old Yincang has been stopped by strikes on one occasion and by submission twice. Schulte can get the job done via either method.

Luis Rafael Laurentino, who is 33-1 but has not fought more than once per calendar year since 2015, joins the featherweight crowd. Is he a threat to run through Alexandre Almeida and vie for the division’s title?

It’s doubtful. It would be interesting to see a Vegas betting line on whether Laurentino makes two (or even one, really) appearances with the PFL. The Brazilian has amassed a Fedor Emelianenko-esque win-loss mark, but it was helped along by his 2013 campaign, in which he fought an incredible 21 times without a loss. Subtract that single year, and his record comes down to a far more modest 12-1.

The deep dive into Laurentino’s resume only further hurts the argument for his success in the PFL. “Japa” fed on very low-level competition through most of his lengthy streak. Only in late 2014 did he start encountering more seasoned opponents, and even those included several with mediocre career marks. He suffered his loss to the unheralded Fabricio Sarraff, and his most notable victories came against Sidney Oliveira, Carlisson Diego Santos and Cleverson Silva. The Astra Fight Team product could turn out to be a revelation this season, but it’s even more likely that he’s revealed as an average fighter with an inflated record.

Almeida was a semifinalist last season who suffered his only two losses to Steven Siler. The 30-year-old topped Lee Coville during the regular season and advanced in the playoffs with a majority nod over Tuerxun Jumabieke. That’s not exactly a championship-caliber resume, but Almeida is still a fighter who boasts wins over PFL featherweight champ Lance Palmer and veteran Saul Almeida. He’s a stiff test for an unproven Brazilian journeyman, and he should pick up his first win of the season in Long Island.