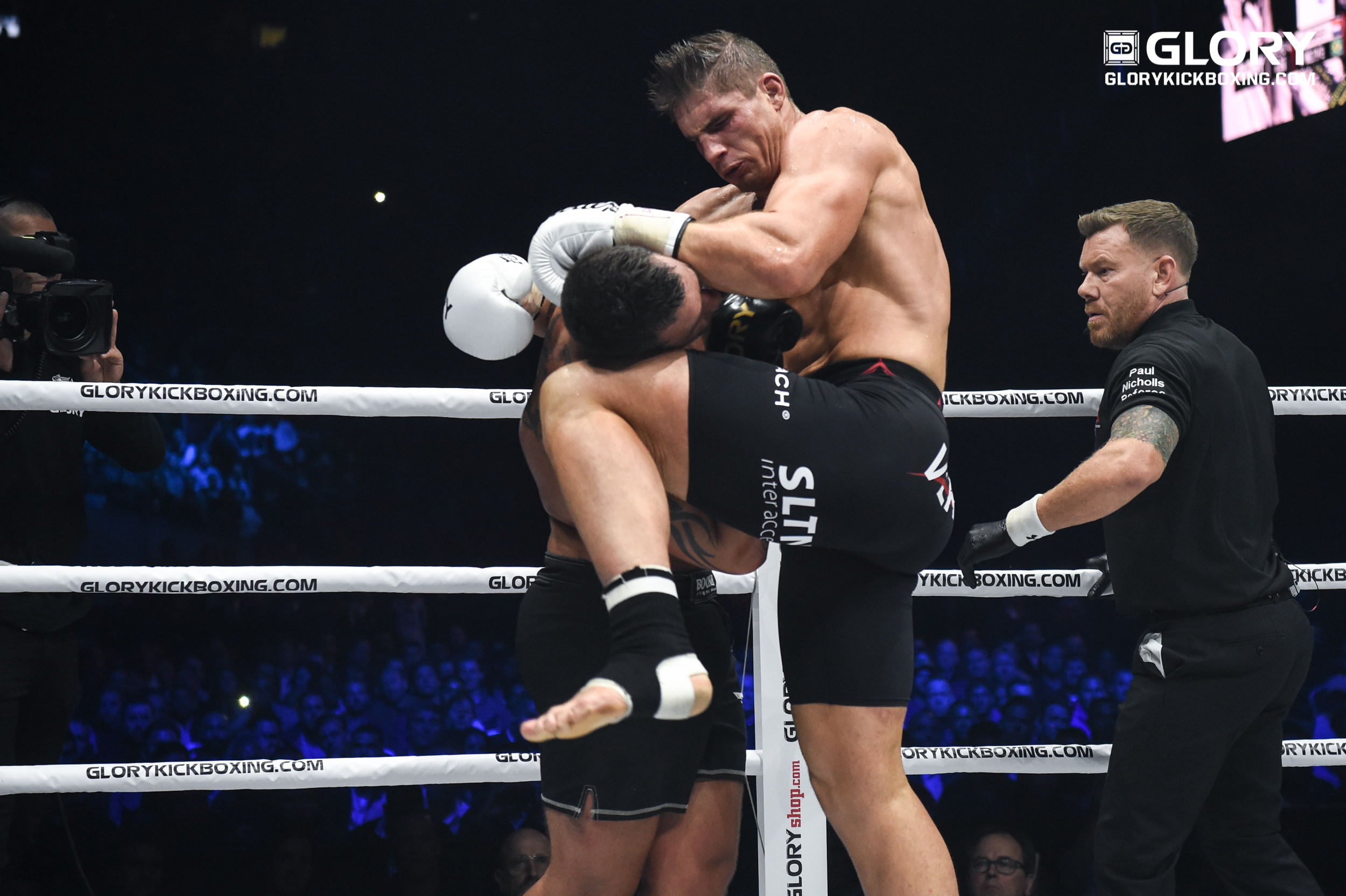 Top-ranked heavyweight, Rico Verhoeven, continued his dominant GLORY run with his eighth title defense against top-10 foe Guto Inocente. “The King of Kickboxing” put forth an impressive showing of pressure, conditioning and skill against his Brazilian opponent in the main event of GLORY 59: Amsterdam. Second-ranked Benjamin Adegbuyi pushed his winning streak to three and earned his ninth victory in his past 10 fights over former Kunlun Fight and Enfusion heavyweight titleholder Jahfarr Wilnis at GLORY 58: Chicago. Finally, fifth-ranked heavyweight Jamal Ben Saddik put D’Angelo Marshall away with three knockdowns in less than a minute.

Droppped from the rankings: Fabio Kwasi (5)

There was plenty of movement at the bottom of the division this month. Almost every fighter in the bottom of the rankings moved up a few spots following Michael Duut’s ‘Knockout of the Year’ over formerly sixth-ranked Mourad Bouzidi at GLORY 59: Amsterdam. With the victory, Duut re-enters the light heavyweight rankings in the ninth spot. Fabio Kwasi dropped out of the rankings this month due to competing in heavyweight division multiple times consecutively. Also, Kwasi recently dropped a decision to Murat Aygun in the World Fighting League heavyweight grand prix.

The top two fighters in the middleweight were in action against one another this month. GLORY middleweight king Alex Pereira defended his title by unanimous decision against Simon Marcus at GLORY 58: Chicago. The victory cements Pereira as the clear-cut, No.1 middleweight with two victories over each of Simon Marcus, Yousri Belgaroui and former top-10 fighter Israel Adesanya.

Two of the division’s best were in action in September, when former GLORY champion Murthel Groenhart and former title challenger Alim Nabiyev made their return to the ring. Groenhart wasted zero time dismantling popular Moroccan Mohammed Jaraya in the second round at GLORY 59: Amsterdam. Nabiyev took down former FFC welterweight champ Eyevan Danenberg with a cerebral performance over the course of three rounds. Both fighters maintain their position in the rankings.

There were three fighters in the top-10 in action this past month. Fourth-ranked Superbon Banchamek qualified for the quarterfinals of the 2018 Kunlun Fight tournament with a unanimous decision victory over Ayman Nayanesh at Kunlun Fight 76. Unfortunately, news broke that Superbon is out of the tournament due to an illness, which means the top lightweight will not be able to compete in the finals of the 70-kilogram tournament for a third consecutive year. Enfusion 70-kilogram champion Jonay Risco continued his hot streak with a title defense against Kunlun Fight tournament participant and former Enfusion champ Nordin Ben Moh at Enfusion 70: Antwerp. Finally, Enfusion 72.5-kilogram champion Tayfun Ozcan stopped Ardalan Sheikholeslami in the third round to defend his title at Enfusion 71: Hamburg.

The top-ranked featherweight kickboxer, Qiu Jianliang, was in action in the ring at Glory of Heroes 34. However, it was under boxing rules against 40-plus fight veteran Saddam Kietyongyuth. Jianliang knocked down his more experienced opponent multiple times, including the final blow that produced the referee stoppage in the third round. The biggest fight of the month took place between top-five featherweights Petchpanomrung Kiatmookao and Robin van Roosmalen. Following a controversial decision in their first meeting, Petchpanomrung made it clear the second time around with a unanimous decision victory over the champion. The newly crowned champ moves up to No. 3 in the rankings. Finally, Ilias Bulaid hung onto the ninth spot in the rankings with a decision win over Youssef El Haji in his long awaited return to the sport following a hand injury.

The bantamweight division featured its busiest month since its inception in April 2018. At the top of the division, Takeru only needed one round to absolutely blitz experienced veteran Daniel Puertas Gallardo at the K-1 World GP 90-kilogram Championship Tournament. At the same event, K-1 55-kilogram titleholder Yoshiki Takei knocked out France’s Akram Hamidi in the first frame. No.3-ranked competitor Wei Rui bested Ukranian challenger Vadym by decision at Glory of Heroes 34. Krush 63-kilogram champion Gonnapar Weerasakreck dispatched of Fumiya Osawa in the first defense of his title at Krush.93. At Kunlun Fight 76, 2018 tournament runner-up Lin Qiangbang was knocked out in an extra round against Fang Feida. Qiangbang drops three spots in the rankings, but remains in the top-10. The final two ranked fighters competed on the last day of the month at a packed Saitama Super Arena in Japan. In a combat sports crossover superfight, Tenshin Nasukawa put on an interesting, yet thrilling bout with former UFC title challenger and Rizin bantamweight GP champ Kyoji Horiguchi. Former K-1 world champion Taiga made his promotional debut against RISE tournament winner Kento Haraguchi. The exciting bout ended in a majority draw after three rounds.

The pound-for-pound rankings featured plenty of action in the top-10, including activity from five of the 10 fighters. The biggest change in the rankings was the fall of former two-division GLORY champion Robin van Roosmalen, who lost his featherweight title against Petchpanomrung. Despite van Roosmalen’s resume in two weight classes, his latest loss and inevitable move back to 70 kilograms isn’t enough to keep him in the top 10. Instead, GLORY middleweight champion Alex Pereira makes his debut at the nine spot following his big win. Three-division K-1 champ Takeru moves up to five with yet another impressive performance against a larger opponent. Lastly, Jianliang and Superbon where in action in China.

Dropped from the rankings: Jady Menezes (10)

The women’s pound-for-pound was relatively quiet at the top of the division. Second-ranked Jorina Baars ran through last-minute opponent Amel Dehby at World Fighting League 8. The lower portion of the rankings have shuffled because of the action during the one-night, eight-women Mulan Legend tournament at Kunlun Fight 76. Formerly seventh-ranked Anissa Haddaoui started off the tournament with a unanimous decision win over Shi Lijang, but fell short in the semifinals against Zhu Mengjia after a hotly contested extra-round decision. On the other side of the bracket, the “Queen of Sanda” Wang Cong defeated Niamh Kinehan in the quarterfinals, Israel’s Nili Block in the semifinals, and Mengjia in the finals to win the 2018 tournament. Cong moves to the eighth spot, which pushes Jady Menezes out of the top 10.