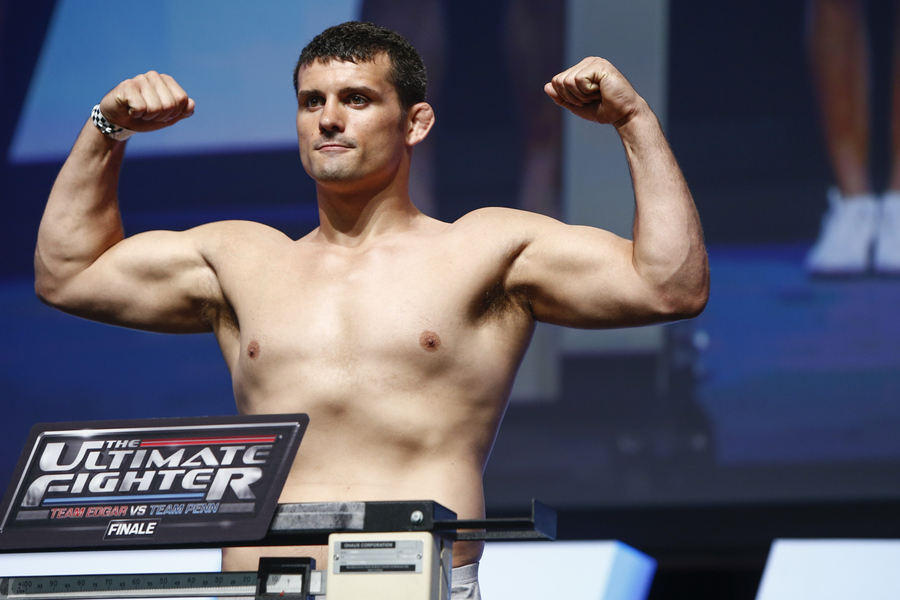 UFC’s Patrick Walsh: Waiting for the Opportunity to Fight in Boston

That’s the cut-off time for Patrick Walsh to be able to continue his UFC career in the one town that would mean the world to him. Just fighting for the world’s biggest and most prolific mixed martial arts organization should be good enough, right?

Fighting in Boston—for Boston—that’s what Walsh wants to do. The clock is ticking, and the days are crossed off the calendar one by one. It doesn’t mean he can’t want it. After all, Boston is a fighting city, and being on that card under the bright lights of the UFC is this fighter’s dream.

And it’s 66 days that he wishes would stop counting down.

“It would mean the world to me [to fight in Boston]. I grew up here,” Walsh explained to Combat Press. “The last seven years of my life, my goal has been to make it to the UFC. And now that I’m here, it’s kinda like a dream come true. But just the idea of fighting in Boston is something. I mean, I’m blessed to be fighting in the UFC, but the fact that it’s coming to Boston and just having the chance that I could get on that card is truly breathtaking.”

The opportunity to compete in a true hometown fight under the UFC banner doesn’t really come around that often. Fighters may get to fight in a district, state or, in the case of fighters from outside of the United States, a country where they grew up, but for a fighter to get the chance to shine right in the city they call home, that’s a rarity.

“I’d have about 500 tickets sold just through me,” Walsh exclaimed. “I coach high school wrestling right in the area. I own a mixed martial arts gym right in the area. So I do have a large following and a large fanbase in the Boston area. I know that the whole MMA community would be behind me.”

With the lineup for the Boston Fight Night event all but set, there isn’t a lot Walsh can do to secure his place on the card. However, if his phone rings and the UFC needs somebody to step up, he’d be the one to say yes.

“I grew up wrestling, and I ended up wrestling in college. Right after I finished college, I just needed something to keep competing. I had an old wrestling coach that was taking a mixed martial arts fight. I went to that gym to help him with his training and getting ready for that fight. I ended up doing a bit of sparring with the guys and ended up watching him fight. And, you know, going to a live show I was absolutely convinced that I was gonna do it and I was gonna be successful with it. I jumped on the next show with very little training and from there I was just hooked and I loved it from then on.”

Fighting doesn’t last forever, though. As brutal as that sounds, it’s a cold, hard reality. Walsh is certainly aware of this. With a degree in hand, he started Victory Combat Academy.

“I’m about six months in,” Walsh explained. “I have a business management degree and that’s kinda my background—managing a business. I managed a mixed martial arts gym prior to that, and now I have this gym where I own it outright. I have no partners with it. I opened it six months ago, and it’s going better than I ever could have hoped. It’s something that I don’t feel like I’m working when I’m at my business. I’m usually there 12 hours a day, but, you know, you have the highest chance of succeeding when you put everything into it. I don’t feel like I’m working because it’s mine. I paid for everything. I hired each instructor that helps out. It’s something that, even though it’s a ton of work and it takes a lot of energy, it doesn’t feel like work. It’s just something that I really like doing and it’s something that I could do for the rest of my life.”

Walsh found his way to the UFC through The Ultimate Fighter reality television series. He was featured in the show’s 19th season, and although he did not walk away as the series victor, the season still did him a world of good, both personally and professionally.

“I knew how well I did,” Walsh said. “Even with my one loss on the show, I still did really well. I was confident that I was going to have a lot of exposure and it was going to be a good thing. With the exposure through The Ultimate Fighter, you’re on national television for months, and it’s something where I would never be able to pay for that kind of personal marketing campaign. And it was definitely something that I was blessed with, because it made my gym much easier to get going and get people at because a lot of people knew about me from the show and watched me and followed me, so that definitely felt great coming off the show.”

Going into the reality series, there are a lot of expectations from fighters. Although there are many ground rules and most of the fighters have seen the series play out before their very eyes on the television screen, there is still so much that they need to prepare themselves for.

“I wasn’t sure exactly what to expect, but I did expect some extremes,” Walsh confessed. “I mean, you’re putting 16 alpha males in the one house and then having them fight each other over the course of a couple of months, so I expected the most extreme stuff. It ended up being pretty comfortable for myself. I’m very adaptive, and I got along with everyone really well. There were only a couple of hiccups, but it’s definitely something you have to adjust to when you don’t have access to the outside world. You don’t have internet, you don’t have TV, you don’t have radio—they kinda strip a lot of things from you. And they do it a lot of the time because, you know, it’s not good TV if everyone’s sitting around just watching television and also because of the fact that it makes you just think about the fight [and] your career, and you’ve just got a lotta time to reflect and socialize with everyone because that’s all you can do.

“It’s interesting. You really get to know yourself with all that time on your hands, and you get to know these guys that you’re supposed to fight. I guess I didn’t expect that you’d have all this time. I thought it’d be a little busier, Yeah, you’re working out four to five hours a day, but you still have the rest of the time to relax, socialize and reflect. That was the only thing that really surprised me. The training schedule, the fighting, everything else was kinda what I thought it would be.”

In his UFC debut on July 6, Walsh walked away with a unanimous decision victory over Dan Spohn. The victory gave the 25-year-old his first taste of success inside the Octagon.

“That was amazing,” Walsh reflected. “I couldn’t ask for anything better. My life goal was to make the UFC, and now I’m 1-0 on the UFC. I was able to compete and train at Mandalay Bay in Vegas. It was definitely something that was an experience. And to come out victorious, that was just some icing on top. It feels great, and I’m really enjoying this experience. I’m extremely excited to continue with my career, but I do wanna be able to reflect and enjoy this moment. I’m in the early stages of my career and I do wanna enjoy it somewhat.”