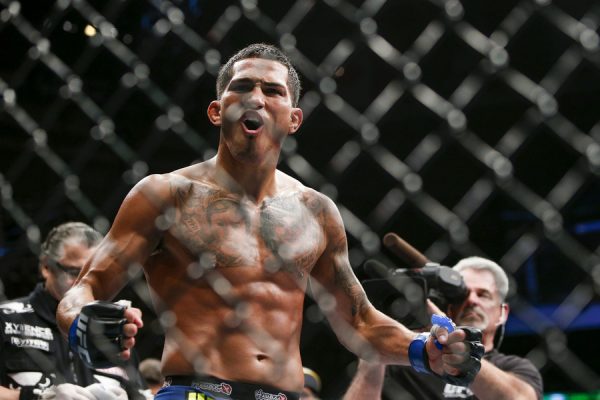 At UFC 226, a historic night of fights came to an end with Daniel Cormier’s somewhat shocking and historic knockout of heavyweight champion Stipe Miocic.

Despite the huge hit the event took with the fallout of a hugely anticipated featherweight clash between Max Holloway and Brian Ortega, it still managed to deliver in a big way — well, with the exception of the snoozer between Francis Ngannou and Derrick Lewis. The fights were so epic, in fact, that they made UFC President Dana White forgive the lackluster performances by the two of the biggest heavyweights on the card. You don’t see that often.

The card included a series of exciting moments, one after another, and it was extremely hard to pick the best of it all. That’s not to say we won’t try, though. Let’s take a look back at the five best moments of UFC 226.

5. The Beef Between Lesnar and Cormier

Whether you believe that the moment was real or fake, you can’t say that you didn’t find it at least somewhat interesting or, perhaps, funny. It might have even angered some fans because it was “too WWE.” Curtis Blaydes sure thought so. However, it did grab our collective attention.

When Lesnar sauntered around the outside of the Octagon and shook the hands of Joe Rogan and Dana White before the main event, we knew something was up.

After the shocking conclusion to the fight, where Cormier scored the knockout against Miocic to become the latest two-division titleholder, Lesnar got in the ring and, to everyone’s surprise, shoved the brand new champ before he got on the mic to deliver a hell of a promo. Regardless of the realism of the situation, it got the job done.

4. Paulo Costa: A Star Is Born

Paulo “Borrachinha” Costa has shown the qualities to be a superstar before, but Uriah Hall was the first real test for the Brazilian. It was a chance for Costa to show what he’s really made of and an opportunity for him to break into the top 10 of the middleweight rankings. He passed the test with flying colors, too.

Costa, just after getting rattled, returned fire and knocked out Hall in the second round. What made this performance a lot more impressive was that Hall looked fantastic as well. He was moving well, popping his jabs and showing great speed. Costa showed his ability to take punishment and keep coming forward, and Hall was eventually caught with a couple of massive punches that put him down.

Shocking. That’s all that can be said of the image of former K-1 champion Gökhan Saki laid out on the mat with a referee over him waving off the fight. It would not be an understatement to say that few people were particularly paying attention to this fight on an already stacked main card. Most people had high expectations for Saki to pick up his second win in a row in the UFC against the relatively unknown Khalil Rountree, a former The Ultimate Fighter cast member.

The result showed that Rountree clearly deserved more respect than most people gave him. He put down a legendary striker at just 96 seconds of the first round. The pure shock factor of the finish puts this fight at quite a high position in this list.

2. Welcome Back, the Old Anthony Pettis

Oh, how long we’ve waited for this. Ever since Anthony Pettis lost his lightweight title to Rafael dos Anjos at UFC 185, he hasn’t looked the same. The Roufusport fighter entered the Octagon on Saturday night after losing four of his last six outings. Despite his young age for the sport, Pettis appeared to already be on the decline. However, the Pettis we know and love resurfaced on Saturday night.

Pettis looked as good as he ever had in submitting grappler Michael Chiesa via triangle armbar in the second round. It’s a massive win for Pettis and certainly the one he needed if he truly wanted to get back on the road to another title shot. His next fight will surely get the fans to tune in.

This one is as easy a choice as any. Cormier finally managed to achieve his dream. “DC” became just the second man ever to hold two titles simultaneously in the UFC. It couldn’t have happened to a better person, either. Cormier is an excellent ambassador of the sport, a humble champion and a loving father. You won’t find a more likable guy than Cormier, and it was very satisfying to see him finally get some long-overdue respect.

It was heartbreaking to watch Miocic fall. The expectant father was an excellent champion, and we can rest assured that he will bounce back better than ever in his next fight. Meanwhile, the image of Cormier with both titles held up together after the fight was pure gold. The moment when Cormier became a double champ is one that will be remembered forever.