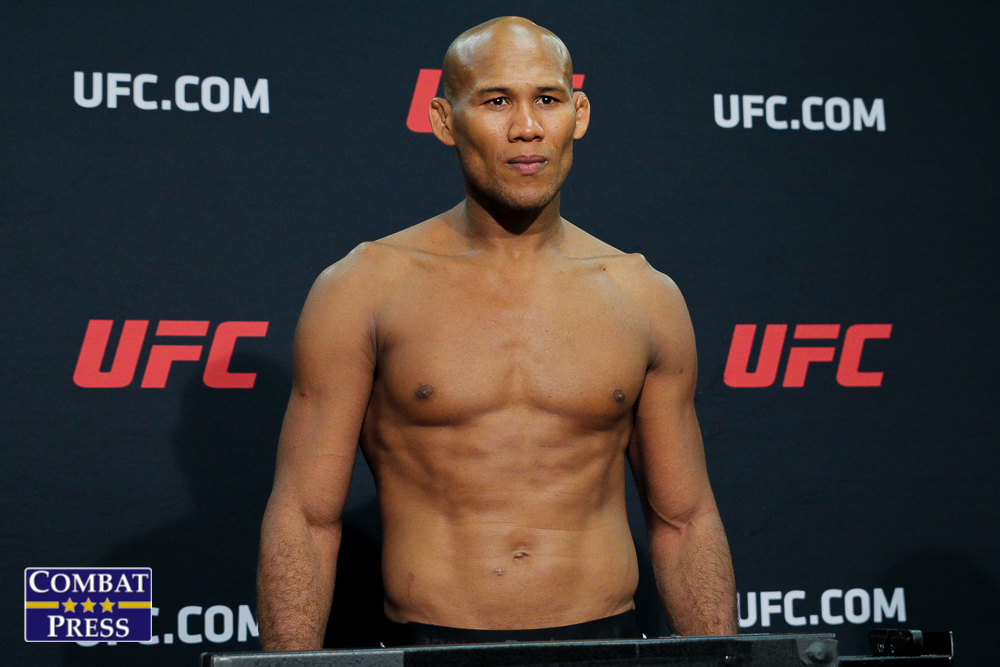 UFC 224: The Importance of Ronaldo ‘Jacare’ Souza vs. Kelvin Gastelum

Not often do we see fighters go up a weight class and fight their way to a title shot. However, the recent past has presented us with a couple special cases in the form of Rafael dos Anjos and Robert Whittaker. With a win on Saturday night at UFC 224, Kelvin Gastelum is likely to add his name to the list and score a chance at the winner of the June 9 clash between Whittaker, the reigning middleweight champ, and Yoel Romero.

Gastelum, who is set to meet Ronaldo “Jacare” Souza, is a very special case. He’s a special fighter, too. Gastelum is the winner of The Ultimate Fighter 17, and he has topped some massive names in the sport already. His TUF coach, Chael Sonnen, said the worst performance he’s ever seen out of Gastelum was a split-decision loss to current welterweight champion Tyron Woodley.

Gastelum has his hands full on Saturday. It doesn’t get much tougher than a fight against Jacare in the middleweight division. Souza has been at the top of the division for years. The Brazilian has defeated almost everybody he’s faced, with only a few exceptions. Don’t let what the aforementioned Whittaker was able to do to Souza fool you. Jacare is still an elite member of the division. He proved as much against Derek Brunson.

It’s fights like this that are extremely important in the division. With less competition, fights like this usually determine the No. 1 contender. With talks of Luke Rockhold possibly fighting Alexander Gustafsson for the interim light heavyweight title at UFC 227, the middleweight division’s top five are quite clearly cut out: Whittaker, Romero, Jacare, Chris Weidman and Gastelum. Fighters like Brad Tavares are looking to break into the top five with big wins, but none of those rising contenders has managed to crack into this group quite yet. With the winner of Whittaker and Romero set to be declared in less than a month and Weidman now recovering from an injury, the clash between Souza and Gastelum presents the highest level of excitement the middleweight division can offer.

How can you not love this fight? There’s no telling what’s going to happen. We know all about Souza and his capabilities, but Gastelum has some amazing technicality in boxing, which we’ve seen on multiple occasions and most recently against Michael Bisping. A knockout doesn’t get more technical and flush than the one delivered by Gastelum against Bisping.

If Souza can get the fight to the ground, then it could mean some trouble for Gastelum. We saw the chink in Gastelum’s armor against Weidman. Even though Gastelum was defending well for most of the fight, he ended up getting submitted by Weidman. The risk is much higher once Souza is on top of his opponent, so it’s an interesting scenario to see if Gastelum’s takedown defense has improved enough to keep Souza from taking him down.

This is what makes fights exciting. It’s all about the element of not knowing what’s going to happen. This is one of the best middleweight match-ups of the year, hands down. While it may be flying under the radar for some people, UFC 224 has some exciting match-ups, and this game is all about match-ups. Jacare and Gastelum are on the verge of proving as much.