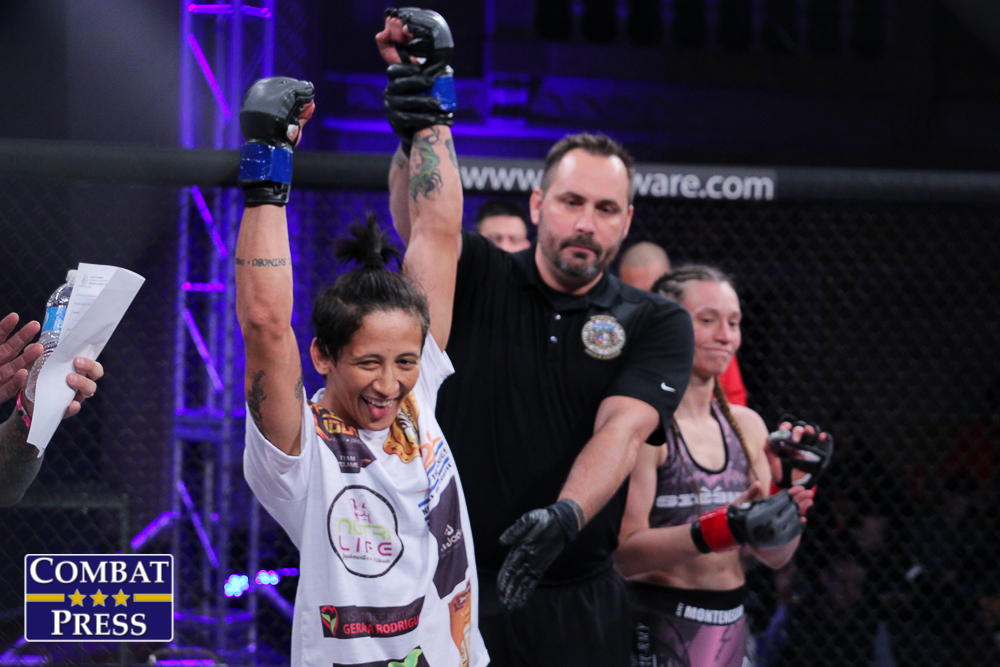 The weekend’s biggest show was delivered by the Invicta Fighting Championships. A new strawweight champ was crowned in the evening’s headliner when Virna Jindaroba defeated Mizuki Inoue on the scorecards. While Inoue put up a valiant effort, Jandiroba was too strong for her Japanese opponent. Unfortunately, one of the judges wasn’t watching the fight very closely. That judge — Rochelle Montanez — turned in a score of 49-46 in favor of Inoue. There’s absolutely no way to justify Montanez’s scoring in a fight where Jandiroba muscled Inoue against the cage and on the mat for the full three rounds.

Oddly, it was another Montanez, this one named Rich, who dissented in scoring the co-headliner of Invicta FC 28 against DeAnna Bennett and in favor of Karina Rodriguez. While the other two judges saw all three rounds for Bennett, Rich gave all three frames to Rodriguez.

The highlight of the evening at Invicta FC 28 had to be Kal Schwartz’s suplex and ground-and-pound finish of 18-year-old Kay Hansen. Hansen was covered in a ridiculous amount of blood after the stunning finish. Schwartz is quietly becoming a fixture in the middle of the Invicta strawweight division. Now, Invicta has a great highlight-reel clip to use when promoting her future outings.

Hannibal Buress got his money’s worth in advertising at the Invicta show. His face was prominent in almost every fight. T.J. DeSantis also made sure to mention Buress by name several times throughout the night.

Invicta took center stage this weekend, but it wasn’t the only show in town. ONE Championship hosted a superfight between bantamweight kingpin Bibiano Fernandes and two-division champ Martin Nguyen. It turned out to be a close affair, but Fernandes eked by with the split verdict.

Russian prospect Rustam Kerimov remained undefeated this weekend after picking up a split nod of his own over Oleg Borisov. It’s not quite the emphatic outcome of his previous bouts with UFC veteran Takeya Mizugaki and Tural Ragimov, but it’s yet another boost to the 26-year-old’s resume.

Cage Warriors opted to split its 92nd event into a double feature that included three title fights. The event, dubbed “Super Saturday,” included such highlights as a 50-second knockout finish for Nathaniel Wood over Luca Iovine in a bantamweight title scrap, a 15-second decimation for Mauro Cerilli over Karl Moore for the heavyweight crown, and a third-round ground-and-pound stoppage by Nathan Greyson over Sam Creasey for flyweight gold. In a notable non-title contest, Jack Shore remained undefeated with a victory over UFC vet Vaughan Lee.

With a 59-second finish of Vinicius Zani, Legacy Fighting Alliance bantamweight titleholder Ricky Simon might be UFC-bound before long. Simon has a five-fight winning streak going, but it’s this latest win and a previous victory over UFC veteran Chico Camus that have truly put him on the map.

The K-1 World GP 2018 Japan K’Festa event has already locked down the best event of the year in kickboxing just three months into 2018. The 24-fight card featured seven of the eight K-1 world champions, plus a one-night, eight-man tournament to crown the vacant super featherweight title. There likely won’t be another event that features both the level of talent on display and the number of dramatic moments and thrilling fights in any combat sport.

Takeru continued his championship pedigree by winning three fights in one night to become the first-ever three-division K-1 champion. The former super bantamweight and featherweight kingpin dispatched of Greece’s Stauros Exakoustidis, Krush champion Masanobu Goshu, and former RISE titleholder Kosuke Komiyama. Takeru is considered one of the best pound-for-pound kickboxers in the world, and the 26-year-old continues to defy the odds as he makes his ascent while moving up in weight to challenge himself. Takeru has won 34 of his 35 outings, with his only loss coming by way of cut stoppage all the way back in 2012.

As for Takeru’s future, there is one potential opponent that every fan of kickboxing from New York to Tokyo is clamoring to see: the 19-year-old kickboxing phenom and undefeated kickboxer Tenshin Nasukawa. Should the fight happen despite numerous contractual and political obstacles in place, it will be one of the biggest and most publicized affairs in Japanese kickboxing history. Who said combat sports are dead in Japan?

Also check out 19-year-old Ren Hiramoto, who picked up a massive upset over the No. 1-ranked featherweight in the world, Kaew Weerasakreck.

Saenchai, a living legend of Muay Thai, continued his reign of dominance over his competition with his 36th straight victory. Saenchai made quick work of Iranian challenger Ramin Moazzami at Thai Fight on Saturday. Saenchai ended his experienced opponent’s night with a massive left elbow that shattered the nose of Moazzami. At 37 years old, Saenchai is still miles beyond his competition with nearly 30 years of fighting experience. There aren’t many fighters like him in combat sports today.

The O2 Arena in London was home to another successful night of Matchroom boxing and its head promoter, Eddie Hearn. The British fans, as they always seem to do, flocked to the arena to see a card that featured Dillian Whyte and Lucas Browne in the main event. They walked away with what might be the leading contender for “Knockout of the Year.” In the sixth round, Whyte floored Browne with a left hook. It was brutal, and left Browne on the canvas for several minutes. He was immediately looked at by physicians. Thankfully, Browne was OK after being rushed to the hospital. This was the performance Whyte needed to set him up for a possible title fight, and the name that could be next for him is Deontay Wilder, if a showdown between Wilder and Anthony Joshua does not come to fruition next.

The card also featured a Lewis Ritson knockout of Scott Cardle in the second round. Ritson, who is only 24 years old, is a force at lightweight. He could soon land among the top 10 fighters in the division if he continues to finish his opponents with such ease.

Across the pond, Reymart Gaballo defeated Stephon Young via unanimous decision to become the interim WBA world bantamweight champion. At 21 years of age, the Filipino boxer is a dangerous prospect and may be the country’s next best hope of a star.

In the evening’s co-headliner, Juan Carlos Payano defeat Mike Plania, also by unanimous decision. Payano is in a nice groove since losing to Rau’shee Warren back in 2016. He has now won three in a row.