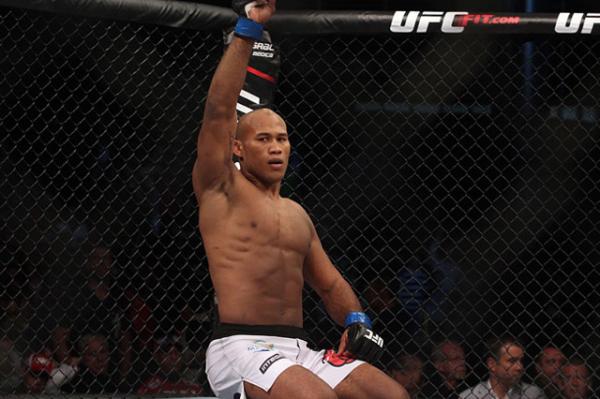 Ronaldo “Jacare” Souza proved that his previous victory over Derek Brunson was no fluke when he once again demolished his fellow Strikeforce veteran in the first round of their UFC on Fox 27 headliner. Jacare is now 8-2 inside the UFC’s Octagon, and this victory likely puts him at the front of the line of middleweight contenders. However, he’s already suffered losses to current champ Robert Whittaker and interim title hopeful Yoel Romero. It’s possible Jacare has found his spot as the most elite of gatekeepers.

UFC’s trip to Charlotte, N.C., also featured a couple of real head-scratching decisions. Ji Yeon Kim robbed Justine Kish in their prelim battle, and Andre Fili surprised some with his split nod over Dennis Bermudez in the co-headliner of the evening.

Mirsad Bektic and Gregor Gillespie continued their ascensions at the event. Bektic made quick work of Godofredo Pepey on the prelims, and Gillespie scored a first-round finish of Jordan Rinaldi on the main card. Gillespie maintained his unblemished record with the win, and he now sits at 4-0 in the UFC. Bektic is now 5-1 as a UFC fighter, and his only Octagon loss came to Darren Elkins, who mounted an unbelievable comeback in their encounter. Bektic and Gillespie are nearing title contention in their respective divisions.

Jake Smith opened Bellator 193 with an explosive knockout of Steve Kozola, but the rest of the Bellator main-card fights went the distance. UFC vet Lorenz Larkin edged Fernando Gonzalez in the main event, but Larkin’s already failed in one Bellator title bid. Another shot at the crown this quickly would only be a testimonial to the lack of depth in Bellator, as well as Bellator head Scott Coker’s prioritization of UFC veterans over homegrown talent.

The Legacy Fighting Alliance crowned two new champs at its 32nd event, which means two LFA fighters have likely punched their tickets to the UFC. Anthony Hernandez claimed the middleweight strap with a decision nod over Brendan Allen, while Ryan Spann put away Alex Nicholson with strikes in the first round of the light heavyweight championship showdown. Hernandez would seem like a sure thing to gain a UFC bid with his undefeated record and what could be considered an upset victory over Allen. Spann is a little more complicated. The “Superman” has often been on the wrong end of the outcome in previous LFA fights against opponents who went on to the UFC and he dropped a bout on Dana White’s Tuesday Night Contender Series. Will an LFA crown trump his past disappointing showings in the eyes of the UFC brass?

Meanwhile, one prospect isn’t doing himself many favors in gaining the notice of the big promotions. Manny Bermudez is 11-0 now, following a submission victory at Cage Titans 37, but his most notable victories have come against the likes of a sub-.500 Jeff Anderson, Rodrigo Almeida, Saul Almeida, Tony Gravely and Bendy Casimir. His victory this past weekend was a drubbing of Seth Basler, whose record sat at 3-6 coming into the fight. It’s time for Bermudez to either receive an upgrade in his own stomping grounds of Cage Titans and CES MMA, or to step up and fight on Dana White’s show against a fellow top prospect. If he keeps fighting scrubs, Bermudez will remain a big fish in a small pond.

Geje Eustaquio’s rematch with Kairat Akhmetov for the interim flyweight title should have been the big topic of discussion coming out of ONE Championship: Global Superheroes — Eustaquio won via unanimous decision, by the way — but another fighter stole the spotlight and even landed his highlight-reel performance on the main page of CNN. That man was Edward Kelly, who wasn’t even a featured fighter on the card. In his prelim bout with Meas Meu, Kelly needed just 21 seconds to score a knockout that actually elevated Meu into the air before sending him crashing to the ground face first. If you’re one of the few who hasn’t seen it yet, check it out:

Featherweight Qiu Jianliang continued his impressive run to the top of the division with a third-round stoppage of Yuichiro “Jienotsu” Nagashima at Glory of Heroes 9. Following the win, many of the Chinese fans have called for him to move up in weight for the biggest challenges available in kickboxing. The 70-kilogram division has long been the deepest and most competitive division in the sport’s illustrious history.

Earlier this year, one of the biggest stars of the sport, Yodsanklai Fairtex, announced he was healthy enough to make his return. He is already scheduled for an upcoming bout against former K-1 MAX champ Enriko Kehl. However, Yodsanklai held a press conference announcing his desire to fight four of the strongest opponents currently fighting today, and the aforementioned Jianliang was among his choices. Will we see Jianliang move up roughly six pounds to fight the far larger Muay Thai fighter, despite having challenges still remaining at 67 kilograms? Only time will tell, but Jianliang’s 12-fight winning streak and tremendous resume of 26 wins in his 27 fights might prompt Glory of Heroes to make the most of its popular star.

Speaking of stars, the living legend Saenchai continued his winning ways with his 34th straight win. Just your average knockout.. a superb Brazilian kick knockout of Brazilian Henrique Mueller. Who can possibly beat this man as he nears his 38th birthday?

In the main event of Thai Fight: Bangkok, Chanajon PK Saenchai Muaythaigym welcomed former Lumpinee stadium champion Saiyok Pumphanmuang back to the promotion. It was a rude awakening for the popular Thai fighter, who ate a vicious right head kick that sent him face first to the floor. Chanajon is due for another step up in competition after this brutal knockout finish.

At Thai Boxe Mania 2018 in Torino, Italy, current K-1 70-kilogram champion and top-10 lightweight Chingiz Allazov stepped up in weight and took down Muay Thai champion Sudsakorn Sor Klinmee, who has now lost back-to-back fights. Allazov has won 26 straight fights and 53 overall with his only two losses coming against top pound-for-pound kickboxer Sitthichai Sitsongpeenong and top-10 lightweight Marat Grigorian. Allazov is already scheduled to defend his K-1 belt against top Japanese challenger Hinata Watanabe at the stacked K-1 Festa event in March, which features all eight of the K-1 champions fighting on the card. Following that fight, it’s time for Allazov to take on the upper echelon of the division — guys like Sitthichai, Superbon and Grigorian.

Krush 70-kilogram titleholder Jordann Pikeur survived a knockdown and put an end to Yutaro Yamauchi in the second round at Krush.84. Pikeur has consistently shown up to fight on enemy territory. Will he take the next step this year after Allazov crushed his momentum with a “Knockout of the Year” contender during the K-1 70-kilogram championship tournament. Win or lose, Pikeur is always an exciting fighter and will have no problem finding fights in Japan in the near future.

It was a slow month of January in the boxing world, but it ended with a bang and an early leader in the “Fight of the Year” competition. Oleksandr Usyk battled Mairis Briedis for 12 rounds and edged out Breidis for the unanimous-decision victory to advance to the finals of the World Boxing Super Series cruiserweight tournament. What makes the win even more impressive for Usyk is that he did it by going into his opponent’s home territory once again. He’s been a road warrior during the WBSS tourney, with wins now in Germany and Latvia, where his opponents have had the crowd heavily on their side. Usyk now awaits the winner of the showdown between Yunier Dorticos and Murat Gassiev, who are also vying for the prestigious Muhammad Ali Trophy given to the winner of the WBSS tournament.

HBO Boxing had an event, too. We could just stop there, because it wasn’t very memorable. However, it’s time to become critical of what has been a trend of lackluster HBO boxing cards. Yes, Jorge Linares was impressive and retained his WBA world lightweight title. Yes, Lucas Matthysse delivered another knockout. Yet, there wasn’t anything to really get excited about, which has become the norm as of late for fights featured on HBO. HBO doesn’t have the star power and the promotional support behind it to compete with the likes of Showtime or even ESPN at this point. Golden Boy Promotions is sputtering, with Canelo Alvarez remaining the only draw for the company. It’s been a sad decline for HBO, which used to be the industry leader in staging big boxing fights.