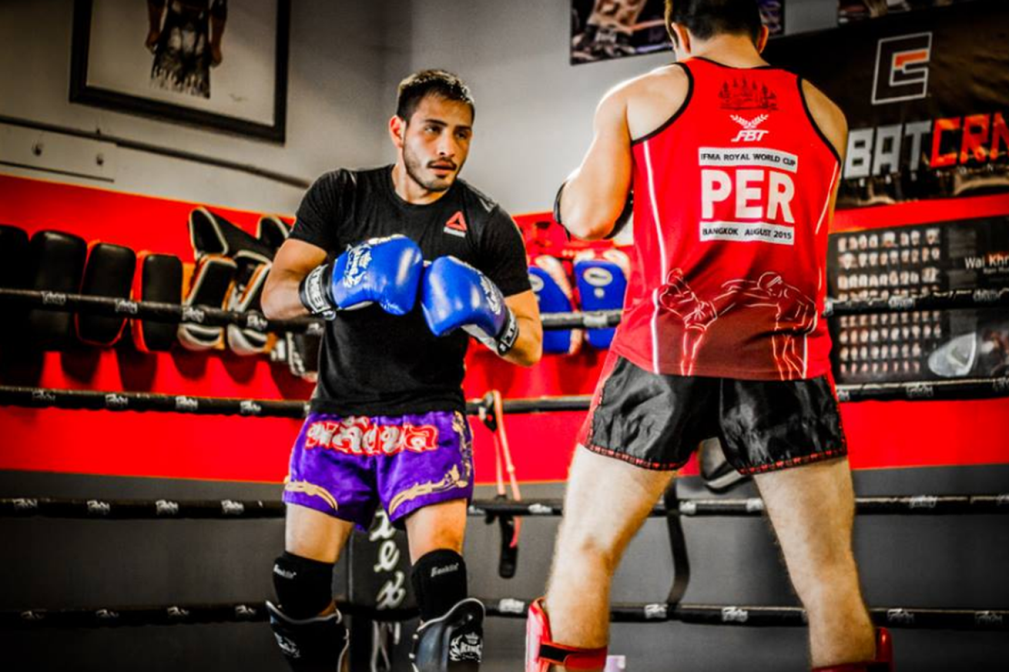 Lion Fight 29’s Diego Llamas: ‘We Are Not Here To Play’

If a husband and wife pack up all their stuff, relocate to another country with few contacts, and do it to chase a dream, people better believe that they are serious about their goals.

Diego Llamas and his wife, Mariana, recently moved from their native Guadalajara, Mexico to Dublin, Calif., to follow a dream of making big waves in the world of professional fighting. Both are Muay Thai fighters, and Diego also trains in MMA. So, how did a couple kids from central Mexico end up as aspiring fighters?

“Actually, I lived my entire life in Guadalajara,” Llamas told Combat Press. “I knew the boxing gym where Canelo Alvarez came from. We are from the same neighborhood. The gym was three blocks from my house. We grew up watching the boxers fighting all the time, walking around, saying hello. They opened a gym by my house, and I thought it was boxing, so I went in to try it out. It was Muay Thai. So, I tried it for a month, and never stopped from there. I was about 16 or 17 years old.”

Like any other kid, Llamas tried out a bunch of sports, but wasn’t that into them. The fight game was different.

“When I tried Muay Thai, I liked it so much, I didn’t stop,” Llamas explained. “I was taking two classes per day, mornings and afternoons, and signing up for some smokers and small cards. I really liked my first three fights as an amateur. I had 25 fights as an amateur and then I tried MMA. I went pro in Muay Thai, and then I went pro in MMA. By then, it had been seven years.”

Llamas is most formally trained in kickboxing, but has been building up his proficiencies in MMA as well. While currently under contract with Lion Fight, he has big hopes for the future.

“Now, that I am fighting in one of the huge shows here in the U.S., we’ll see how things go,” Llamas said. “I may go back into MMA early next year. I would like to do Lion Fight, then Bellator Kickboxing, then Bellator MMA, then, hopefully, my goal is to get into the UFC.”

This weekend will mark Llamas’ ninth pro fight, as he faces P.J. Sweda on short notice at Lion fight 29, live tonight on AXS TV. After a five-fight winning streak with four knockouts and one decision, he has no plans of slowing his momentum.

“I took this fight on two weeks’ notice,” Llamas said. “When they asked me, I knew I was ready. At the gym, someone is always in camp. I work with Kevin Ross, and he was just in Bellator Kickboxing, and I worked with him every day. Basically, I was in training, so when they asked me, I said ok. I’m on weight, I’m ready, and my cardio is strong.”

Another important component to Llamas’ stacked training regimen is his wife. She is also a Muay Thai fighter with an impressive record of her own. They’ve been married for three years now, and actually met at the weigh-ins for an event that they both were competitiors in. As Diego puts it, “she picked me up.”

“Mariana is a two-time amateur Muay Thai national champion in Mexico,” Llamas elaborated. “In California, she also won a title. We train six times a week, at least. I help her by holding pads, we train together, and we sometimes spar together.”

Mariana is a few years the elder of Diego, and they are planning to start a family when she is done fighting, so it is likely that she will end her career while he continues to pursue that dream of eventually making it to the UFC.  After they are both done fighting, the plan is to move back to Mexico to carry on their family life. For now, Diego Llamas is focused on the next task at hand, which is taking out PJ Sweda tonight, live on AXS TV.

“We left everything behind to follow our dreams and we are not here to play”.

Diego would like to thank his wife, Mariana, Lion Fights, and the whole CSA team, which has helped keep him on the path to achieving his dream. Follow Llamas on Twitter: @TerrorLlamas
Advertisement