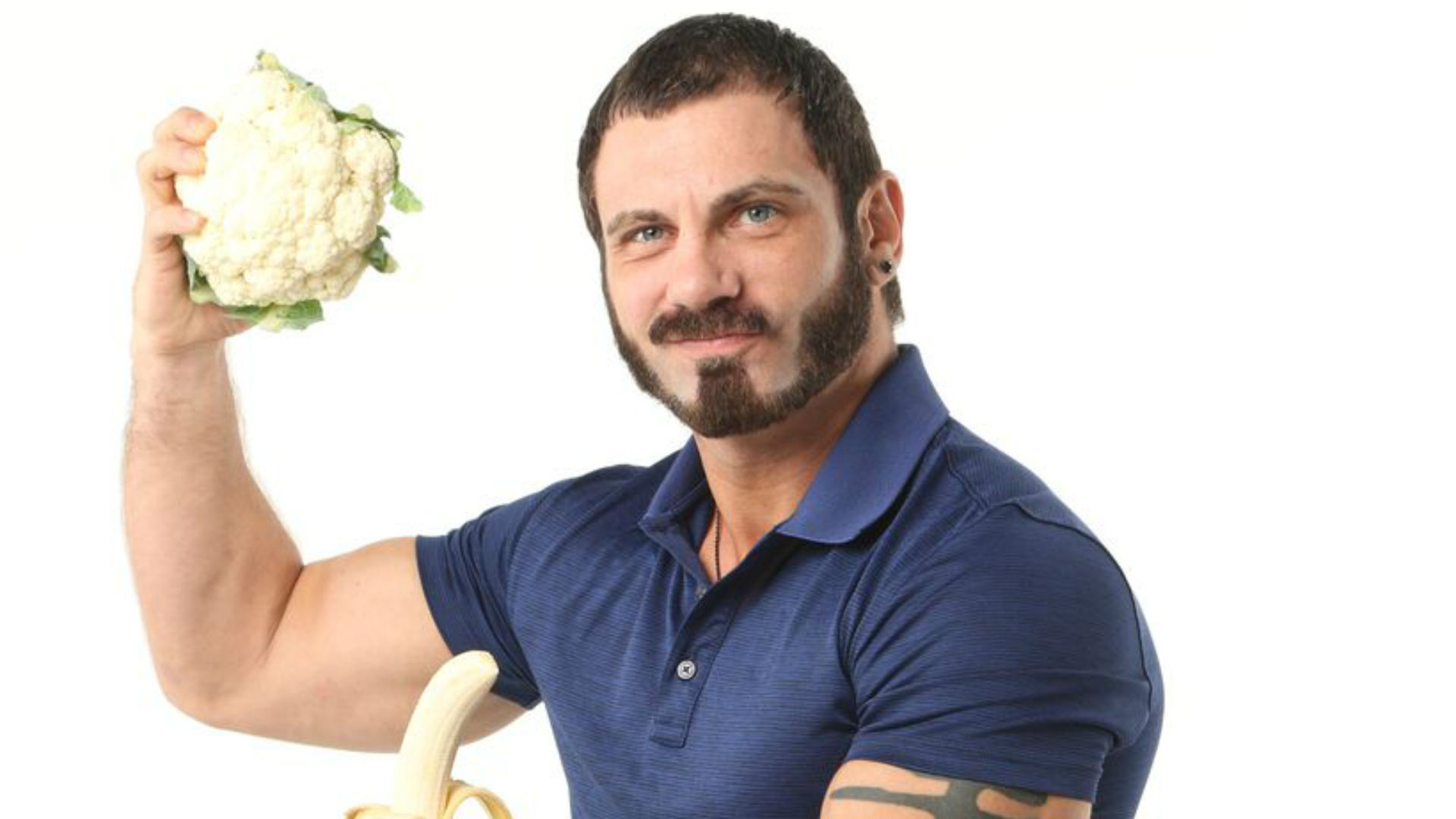 It’s no secret the world of MMA has drawn from the world of professional wrestling. Over-the-top production matched only by larger-than-life characters are just a few instances of how MMA has been influenced by pro wrestling. What’s the next wave of change? Perhaps an entire diet overhaul.

Pro-wrestling star Austin Aries has practically seen it all and done it all inside the squared circle. Through 17 years of competing inside the ring, Aries has captured championships and accolades along the way to becoming one of the best wrestlers in the business today. As great as his run has been, it’s the next leg of his journey in which he believes he’ll have the greatest impact.

Rather than producing a biography or sharing stories from his time on the road, as most of peers would do, Aries is releasing a book that showcases his somewhat unconventional diet. The book, titled Food Fight, details Aries’ transition from the cheese-and-brats Midwestern boy to the plant-based diet he lives today.

“I was working with Josh Eldridge, who I met working at Impact Wrestling, [and he] knew Mike Tully, who is the co-author,” Aries told Combat Press. “[Tully] had written a book with Jason Ellis, and it was successful. [Eldridge] put us in contact, and when it came together, I thought it’d be really cool to tell people my story.”

Where do you get your protein? Do you miss bacon? These are just some of the questions Aries has faced through the years. Hearing the same questions over and over led him to share the answers through the written word. As Aries explains, there’s plenty of material for the book, as the switch to a vegetarian lifestyle and eventually using a plant-based diet isn’t one that occurred overnight.

“The full transition to veganism did come after I watched the documentary Forks Over Knives,” Aries said. “It’s a documentary on the China Study, which was a 20-year study they did on the effects of milk proteins and cancers and disease. It made me say, hey, I’ve come this far and if it’s simple as eliminating a few things, it was something I can do. The main thing for me was taking out the cheese and switching from whey protein to a plant-based protein.”

According to a three-year study from the National Health and Nutrition Examination Survey, 36 percent of American adults are considered obese. It’s a number that’s sure to continue to grow unless people can make some serious changes in their diets. Aries believes this needs to be a system-wide change.

“I think we’ve been indoctrinated to think every meal needs to involve a meat or some kind of egg,” Aries said. “I ask people, ‘What is the last meal you ate that didn’t have meat, dairy or eggs?’ I get a lot of blank stares. That comes from people being indoctrinated into thinking every meal has to have those.”

Despite feeling a need for change, the former WWE star doesn’t want to come across as someone who deals with absolutes. It’s part of the reason Aries avoids using the term veganism when possible. Aiming to avoid the negative stigma behind the “v word,” Aries wants to create an open-door policy through his book.

“I don’t want to set people up for failure,” Aries said. “I didn’t go vegan overnight and I certainly don’t expect anyone else to. The reason I like to use the term ‘plant-based diet’ is because anyone can implement more of a plant-based diet in their life. It can be a gradual progression. And I believe if people open their minds and make small changes to feel a difference, they’ll keep taking on that journey at their own speed. I’m not trying to veganize the world.”

Considering the importance of proper nutrition and weight-cutting in MMA, Aries’ concept of a plant-based diet seems like a natural fit. Fighters are always searching for ways to better cut weight and maintain their size while getting all of their proper nutrition. It’s why we’ve seen guys like Mike Dolce and George Lockhart become so popular with MMA’s elite.

“I think there’s some merit to that,” Aries said of MMA fighters using a plant-based diet while cutting weight. “The only cholesterol we consume outside of what our bodies produce is from animal products and hydrogenated oils. So when you cut the cholesterol out, that’s going to help with limiting your fat intake. A lot more athletes and entertainers are starting to get on board to some degree, because they see there’s some merit to this diet. As I like to say, the proof is in the chia pudding.”

Of course, one of the major criticisms fighters and people in general have of healthy diets is the perceived expense of eating healthy. MMA is a sport that’s had its fair share of issues regarding fighter pay. Outside of the top athletes, most guys on the regional scene work day jobs just to afford proper training camps. Aries has been questioned about expenses seemingly as much as he’s been asked about missing bacon, it’s no surprise the professional wrestler has the perfect answer to the critics.

“If people open up their fridges or cabinets, they’re going to see staple foods that help sustain them and then they’re going to see luxury foods,” Aries said. “Like cereal, for example. Cereal has very little nutritional value, but you’re going to spend three to four dollars on a box of cereal. You’re not getting much nutrition for that three or four dollars. Or another example, a bag of rice. That bag of rice that you make yourself is really cheap. A bag of lentils and a bag of beans is very cheap. What’s not cheap is having someone prepare all of it for you. Once you decide that eating and a diet is a priority for you, you’re going to move resources to eat a healthy lifestyle. It’s really something you have to make a priority for yourself.”

Success as an MMA fighter and proper nutrition almost always go hand in hand. With the popularity and availability of knowledge regarding plant-based diets rising, we might see more fighters take a walk on the all-natural side. Jake Shields and Jon Fitch have already made the switch away from conventional diets, and they’ve enjoyed prolonged careers. It may become a staple in more training camps, too. Whether fighters and the general public choose to adopt these sorts of changes is up to them, but Aries looks forward to the challenge of helping people beyond his work inside the ring.

“I’ve been really blessed and lucky for the past 17 years in this business,” Aries said. “As an entertainer, our job is to make you forget about your problems. That’s why we listen to music or watch MMA and other sports. As I transition to a different part of my career, I want to start helping people solve their problems instead of just forgetting about them.”

Aries indicated he doesn’t have any plans to become the next nutrition guru for athletes, but he does have some plans for the average Joe. Still, by generating interest and from educating people on the benefits of a plant-based diet, Aries could capture the biggest accolade of his career.

“I went to a Vegfest, which is a big vegetable festival, and I was lucky enough to be one of the guest speakers on the stage,” Aries said. “After my speech, I went to my table and talked to people as they walked by, and this guy came up to me to say how he was a big fan of mine going back almost 10 years. He said he remembered how he always heard about me being a vegetarian and adopting a plant-based lifestyle. He told me it really inspired him and he lost over 220 pounds. That moment, that to me is more fulfilling than any championship or great match that I’ve had.”

The pro-wrestling star will look to enjoy similar moments by helping those who want to make the change to a plant-based nutritional plan. As MMA fighters continue to look for every benefit they can get prior to stepping in the cage, it wouldn’t be a shock to see Food Fight on a few fighters’ bookshelves.

Still not sure about plant-based diets? Reach out to Austin Aries himself on Twitter: @AustinAries and Instagram: @austinhealyaries.
Advertisement