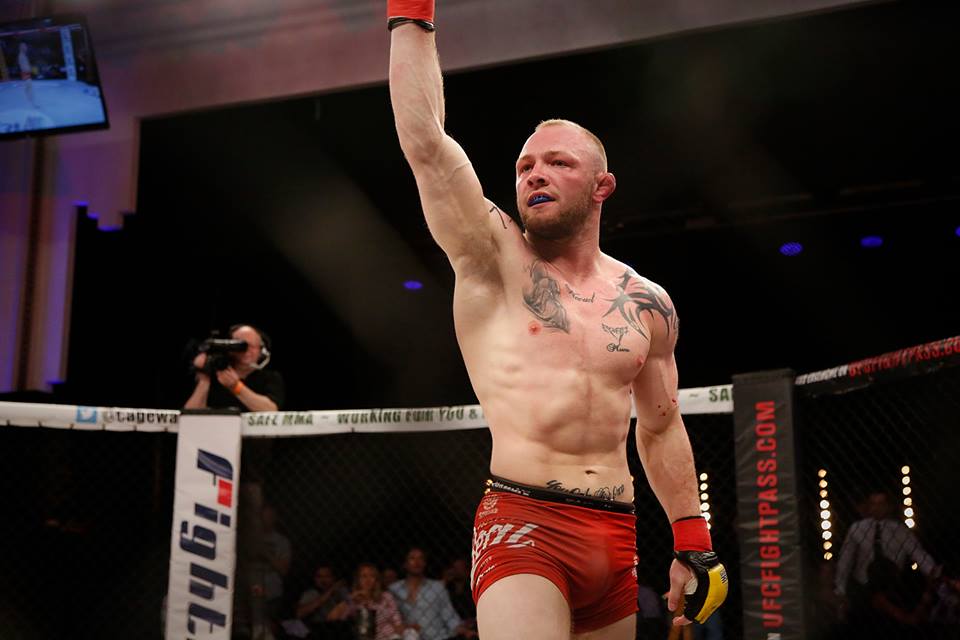 Out of Obscurity: M-1 Challenge 84, Cage Warriors 88 and Grandslam 6

Kunchenko, 33, made it onto our recent “Give Them a Chance” prospect list. He only debuted as a pro in 2013, but he has quickly developed into one of the top non-UFC fighters out there. He remains undefeated through 16 outings. Kunchenko has faced some tough veteran competition, but his most notable victories, in addition to his title-clinching win over Murad Abdulaev, came against Bellator veterans Ron Keslar and Carlos Pereira. After capturing the welterweight crown from Abdulaev, Kunchenko returned to action in a non-title catchweight bout and worked his way to a unanimous decision nod over Eduardo Ramon. Then, he successfully defended the title against Abdulaev in a rematch and against Maksim Grabovich, who entered the bout with an underwhelming 5-3 mark. Kunchenko, a Russian military hand-to-hand combat champion, also has a foundation in Muay Thai. The Boets product registered 11 of his 16 wins by way of strikes.

The challenger, Romanov, is a big improvement over Kunchenko’s last opponent. The 27-year-old has only lost once in 13 pro fights since making his debut in 2012, and that loss came in only his third fight. The Sech PRO fighter has won 10 in a row, including six by way of strikes. Overall, he has eight wins via some form of knockout. While Romanov’s early fights came against subpar competition, he’s stepped up his game in his last five outings. He scored first-round finishes of veterans Sérgio de Fátima and Andreas Birgels before working his way to a unanimous nod over a common opponent he shares with Kunchenko, the aforementioned Pereira. Romanov has since add a decision over Magomed Sultanakhmedov, who was returning from a six-year hiatus, and an injury TKO finish of Arda Adas, a former Sprawl & Brawl MMA welterweight titleholder.

Kunchenko can deliver devastating flurries of punches on the feet and barrages of ground-and-pound strikes when he gets to mount, but he tends to sit back and wait for counters. He’s strong in the clinch, too. He’ll have to beware of Romanov’s tendency to use leverage and trips in the clinch to gain top control and work his own brand of ground-and-pound. If Kunchenko isn’t careful, he could end up fighting off his back against an aggressive Romanov.

This is shaping up to be a grueling affair on par with Kunchenko’s rematch war with Abdulaev. Romanov might press forward on the feet, but he’s just a tad slower than Kunchenko and will probably get caught by a lot of counters when he tries to step in and duck while throwing punches or kicks. Romanov tends to only deliver single strikes, so Kunchenko will eventually time his counters to land perfectly. Kunchenko might get caught in some clinch situations, but he has the strength and balance to likely avoid Romanov’s style of takedowns. It’ll be just enough to give the champ a hard-fought decision victory.

Fishgold, a teammate of fellow Next Generation MMA stud and Cage Warriors star Paddy Pimblett, has been making a name for himself on the British MMA scene since his 2010 pro debut. He compiled a 10-fight winning streak to kick off his career. Along the way, he notched wins over veteran Andy DeVent, The Ultimate Fighter 22 cast member Marcin Wrzosek and journeyman Olivier Pastor. Fishgold finally suffered a loss in his first trip out of Britain to face Gi Bum Moon in Taiwan. Moon took a unanimous decision over Fishgold, who then returned to the United Kingdom and fought to a majority draw against Ryan Roddy. Those fights came after an extended layoff for Fishgold that included a move to Phuket Top Team in Thailand. The Next Generation fighter righted the ship in his next bout and now has six straight wins, including five stoppages. Along the way, he defeated veteran Adam Boussif for the Cage Warriors lightweight crown and added successful title defenses against Jason Ponet and TUF 16 alum Nic Herron-Webb. The former featherweight fighter has 11 submission wins and just two victories by way of knockout.

The 29-year-old Jacobsen made his pro debut with Cage Warriors in 2014, but it came in a losing effort against fellow rookie Rioo Ibrahim. “Bad Romance” has been perfect ever since, but his most seasoned competition has been Tim Close, Tim Wilde and Tom Green. Outside of those three fighters, who held a combined 31-8 mark when they met Jacobsen, the Rumble Sports and Fight and Fitness Bergen product has seen a set of fighters who held a combined record of 5-13-1 prior to their clashes with the rising lightweight prospect. Jacobsen has issued a number of first-round finishes while maintaining a balanced record that includes four submission victories and three knockouts.

Norway’s Jacobsen comes to enemy shores to take on Fishgold, a fighter who has never lost in his native Britain. Fishgold has the bulky, compact frame common of a wrestler, and he throws the same types of surge-forward power strikes that are associated with a wrestler’s striking game. On the ground, he works well from top control and has an excellent grappling arsenal that has proven effective in securing him the finish.

Jacobsen has some huge holes on the ground. He’s solid at transitioning and took mount several times against Close, whom Jacobsen eventually submitted. However, Close was able to reverse to top position once Jacobsen took mount and threw up several submission attempts in that fight. Close failed to finish Jacobsen and eventually paid for it. Fishgold won’t suffer the same fate. The British star is much better at following through on his submissions. Fishgold will seek to put Jacobsen on the mat and then start working for the submission. Jacobsen lost his pro debut via choke, and he’ll end up tapping before the end of this contest as well.

A lot of the fighters off our recent Combat Press “Give Them a Chance: 32 Prospects Who Deserve a Shot at the Big Leagues” list seem to be fighting this October. Grandslam MMA 6 even features two of these prospects, although they’re competing in separate bouts. Go Kashiwazaki takes on Tomohiko Hori, who is just one fight above the .500 mark. The more competitive affair comes in the same bantamweight division, where Rogério Bontorin draws Michinori Tanaka.

It’s rare for a fighter on the regional scene to flirt with a top-15 ranking in any weight class, but that’s exactly what Bontorin has managed to do in the flyweight division. The 25-year-old has been a nightmare on the ground for his opponents. Since debuting in 2013, the Gile Ribeiro Team and Noguchi Team product has tapped 10 opponents. He has also tacked on one knockout. Bontorin won the Imortal FC 5 “Road to Pancrase” tournament to punch his ticket to an appearance in the Japanese promotion. He was forced out of a slated match-up against Mamoru Yamaguchi, but finally debuted in Pancrase against Takeshi Kasugai. The Brazilian submitted Kasugai, but the bout’s result was a no-contest because Bontorin missed weight. He has since returned to Brazil to hand the first pro loss to Jon Olivar and knock out Rildeci Dias in just 48 seconds. Bontorin has fought everywhere between flyweight and featherweight, but this contest takes place in the 135-pound weight class.

The 27-year-old Tanaka is a legitimate test for Bontorin. The 2011 Shooto Rookie Tournament winner and MVP is also a former Pacific X-treme Combat bantamweight titleholder. The judoka signed with the UFC in 2014 and debuted at UFC 174, where he outworked Roland Delorme en route to a unanimous nod. Tanaka stumbled in his sophomore Octagon outing against Kyung Ho Kang, who edged Tanaka via split decision. The Team Alpha Male Japan export added a split-decision victory over former UFC bantamweight title challenger Joe Soto at UFC 195, but he lost his next two outings on the scorecards against Rani Yahya and Ricardo Ramos. This will be the Japanese fighter’s first appearance since parting ways with the UFC. Five of his fights have ended in submission victories, while the remainder of the contests have gone the distance.

Bontorin is a young up-and-comer who has yet to taste defeat since turning pro in 2013. The Brazilian has defeated veterans Israel Silva Lima and Ivonei Pridonik and handed Cristiano Souza the first loss of the prospect’s young career, but he has also seen his fair share of inexperienced and overmatched adversaries. His stock has continued to rise with four consecutive first-round finishes (including in the no-contest against Kasugai).

Tanaka’s a tough one, though. The Japanese fighter already has five UFC outings under his belt. He might have gone 2-3 during that run, but he wasn’t in over his head. He represents, by far, the most skilled opponent Bontorin has encountered thus far. If the Brazilian notches a win, it’ll show that he truly is UFC ready. If he falls to Tanaka, then it could be back to the drawing board (or, at least, back to the flyweight division) for Bontorin.

So, which way will it go? Tanaka is too tough to fall victim to a submission. Bontorin, though, has looked too good to get outworked over the course of three rounds. The Brazilian won’t have an easy time in this outing, but he should walk away with the decision.