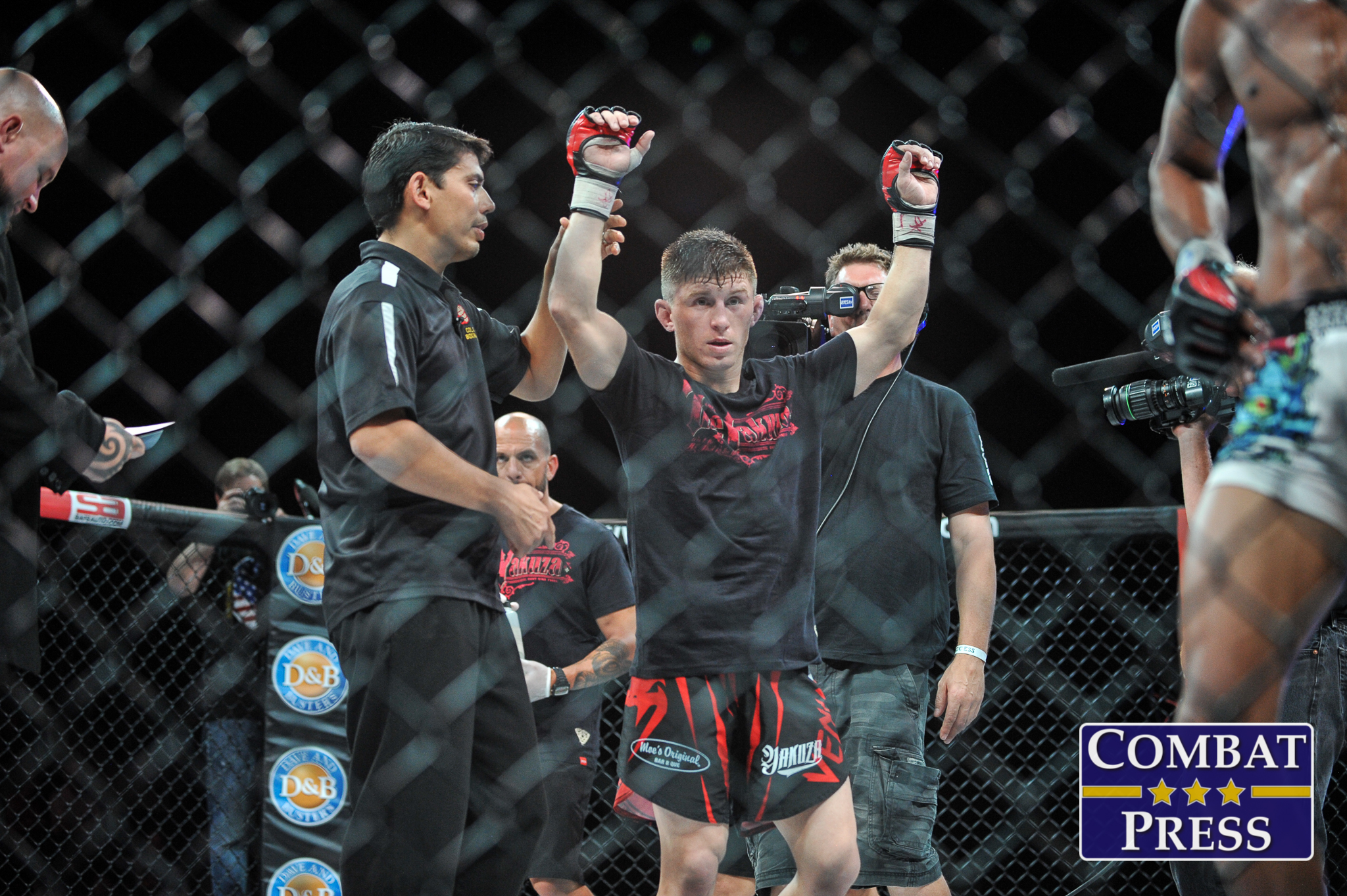 Redemption comes in many forms. Whether it’s Lloyd Christmas trading in the sheep-dog truck for a scooter or Tom Brady bringing home another Super Bowl ring amid controversy and scandal, some people just need to redeem themselves and make up for previous shortcomings.

Professional fighter Sid Bice has a bit of his own regret in life. At one point he was on top of the wrestling world, but unfortunate circumstances — losing a wrestle-off, the death of a relative, and poor grades in school — caused him to abandon the sport he loved. This type of spiral would put some folks into a hole where they may never climb out. However, Bice has used it as fuel.

“I grew up wrestling, and that was always my passion,” Bice told Combat Press. “I actually wrestled in Sioux Falls, S.D., at a college called Augustana. I wrestled for only two years, and I ended up quitting. It’s been haunting me forever. It’s just been in the back of my mind. I beat a bunch of guys in college that ended up being national champions and All-Americans, and I didn’t even finish it out. That’s what still pushes me today.”

When Bice left college to go home and work on his family’s South Dakota ranch, he decided to give MMA a try. It stuck. He had found a new passion. Now, in 2017, Bice stands at 7-1 as a pro. He has two knockouts and one submission. He’s also within striking distance of the UFC’s flyweight division.

Bice’s last fight was in the Legacy Fighting Alliance cage in April, when he defeated fellow Midwesterner Cody Land by unanimous decision at the Sanford Pentagon in Sioux Falls. It was a great win, but he really wanted the stoppage. On Friday night, he will be back at the same venue for LFA 19, where he faces Missouri’s Kenny Porter in the evening’s co-headliner.

“I want to make a statement on these guys, because that’s the only way I’m going to make it to the UFC,” said the South Dakota native. “You’re definitely going to see some fireworks in this next one. I’m definitely going to put a show on for the crowd, especially because it’s my home state. I’m so pumped. I feel like I can’t lose back there.”

Porter has fought a lot since his pro debut four years ago. He is currently sitting at 10-3-1 with five submissions and two knockouts under his belt.

“I’ve watched a few videos,” Bice said. “He’s got some good striking, but wrestling seems to be his downfall. He’s been beat by some good wrestlers. He’s got some decent jiu-jitsu, but it looks pretty basic. I feel like I can beat him everywhere. It just depends on where the fight goes. I think I’ve got him in every aspect.”

Several years ago, Bice left his home state for the Rocky Mountains of Colorado. He landed at Factory X Muay Thai in Englewood, under the tutelage of Marc Montoya. Bice has grown immensely since making this transition.

“I’ve been there about five years now,” said the flyweight. “I came just as they were moving to the current location. There’s a huge difference. I always thought I was the best in the world back then, but obviously I had a lot to learn. I’m starting to feel like a vet now. I’ve been doing this for so long, and I’m finally growing into the fighter I can be.”

On Friday night, Bice will get the opportunity to move one step closer to redemption. He abandoned the sport he loved in college, but now he is dominating the sport he truly feels is his passion. A win over Porter may not be the end goal, but it’s the next goal en route to the big show. The UFC Octagon is calling his name, and the coveted UFC flyweight championship is his target for the ultimate redemption.

“I hope I smash this dude, and I hope the UFC calls me,” said Bice. “Honestly, I feel like I’ve been knocking on that door for a while. He’s got a good record and a decent name, so if I go in there and put a statement on him, the UFC should be calling. If not, I hope the LFA will give me a title shot. If I go in there and win the title for LFA, then they’ve got to sign me. I feel like I’m going to knock this dude out. I think he expects me not to be a good striker, and I’m going to surprise him. I think for a [flyweight], I still got power, and I’m going to put him on his ass.”

Bice would like to thank his coaches and teammates at Factory X and Landow Performance. He would also like to thank his family, friends, fans and sponsors: Northern Climate Control, 5 Star Industries, Jawbox Jerky, Pheasant Bar, Terphouse and Dynamic Fastener. Follow Sid on Twitter: @SidVish125
Advertisement