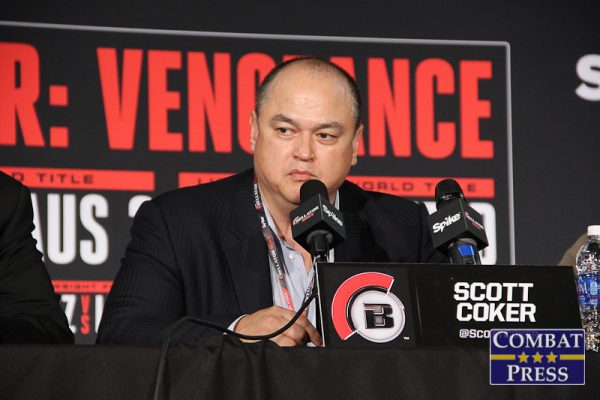 One man can change the world — Big Sean

Rapper Big Sean said it best in one of his recent songs. One man really can change the world. For Bellator MMA, that one man is Scott Coker.

Since being brought on by Viacom in 2014, the Bellator president has implemented changes across the board for the organization. It began with the removal of tournaments that had become so synonymous with the Bjorn Rebney Bellator regime. Coker created “tent-pole events,” cards that felt like special events for a promotion that has usually delivered in excitement. These tent-pole events featured autograph signings, public workouts and even entrances reminiscent of Pride FC.

While many of the changes Coker has made are in Bellator’s presentation, the key change he has made is something more than just visual oohs and aahs. He’s made Bellator a viable No. 2 option in the MMA game.

Under Rebney, Bellator was always the second-best promotion in town, but that was more by default. With Coker at the helm, the Bellator brand has been propelled to a new level. Now, fighters know they can go to Bellator and not spend their time competing in an empty void.

Coker has done this by signing a few UFC castoffs while bringing in a number of fighters with name value. Guys like Kimbo Slice, Ken Shamrock and Royce Gracie, among others, aren’t going to compete for world titles, yet these men still draw with both casual and hardcore fans. Whereas the UFC still features the cream of the crop in MMA fights, Bellator can use these big draws to offer something else — a little bit of fun — to fans.

However, it’s not all fun and games with Coker. A number of recent signings have put Bellator squarely in the spotlight. Benson Henderson, a former WEC and UFC champion and owner of a two-fight winning streak, signed on the dotted line for Bellator. This signing was a momentous occasion for the promotion, not only because Henderson is still one of the best fighters in the world at lightweight and welterweight, but he’s also the first big name to leave the UFC due in no large part to the Reebok deal.

Henderson did make it clear that the UFC-Reebok deal played a part in him signing with Bellator. For his last fight in the UFC, Henderson earned a measly $15,000 from Reebok. That’s likely a drop in the bucket compared to whatever he was making pre-Reebok deal. It’s also a sad amount for a former champion who was in the top of the lightweight division before switching to welterweight.

The Reebok deal is likely to make the free-agent market very interesting by playing directly into Bellator’s hands. We’re already seeing guys like Alistair Overeem, Aljamain Sterling, Matt Mitrione and others fight out their contract rather than renewing early. Rumors have circulated on where the UFC is at in terms of getting some of the bigger-name fighters under contract. The outlook isn’t as promising as one would expect.

Also source told me that no movement on Overeem or Sterling. Was told its a real possibility that UFC loses Overeem, Sterling and Benson

We’ve already seen Henderson walk away from the UFC. Could he be the first of many?

Considering Henderson fielded a number of inquiries from his fellow fighters, odds are we’ll be seeing more talent heading to Bellator. It’s a step in the right direction for creating a more level playing field for fighters in the MMA world.

The UFC will always be the No. 1 promotion in the world. Nobody will be changing that fact anytime soon. But by establishing itself as a legitimate landing spot for other free agents who may not want to play by the UFC’s rules, Bellator can continue to solidify its place as the best option for guys to get quality fights and a quality paycheck.