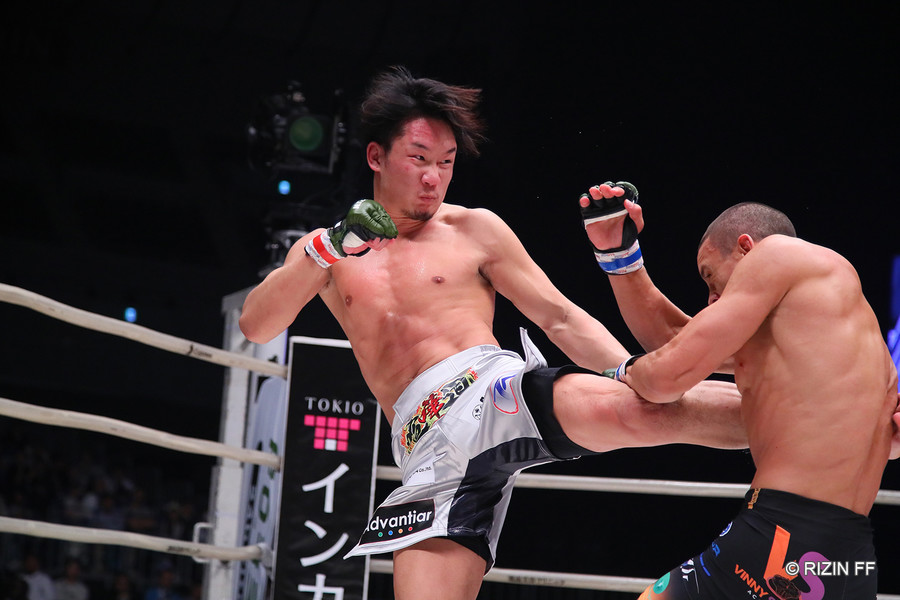 After over a month since the company’s last event, the Rizin Fighting Federation returns to Osaka, Japan, for RIZIN.25, which is headlined by a title bout featuring Mikuru Asakura and Yutaka Saito for the league’s featherweight championship.

Asakura is riding an eight-fight winning streak and has compiled a 7-0 record within the Rizin organization. Now, he prepares for the biggest fight of his career in an effort to capture the Rizin gold. His opponent, Saito, is a seasoned MMA veteran who has compiled an 18-4-2 record and is coming off a devastating knockout victory via soccer kicks over Kazumasa Majima. He plans to play spoiler and hand Asakura his first defeat in the promotion while capturing the league’s featherweight championship in the process.

The co-headliner is a bantamweight clash between Hiromasa Ougikubo and Kenta Takizawa. Takizawa is coming off a split-decision victory in his Rizin debut and now rides a two-fight winning streak heading into his bout with the 27-fight veteran Ougikubo, who has compiled a 2-2 record with the promotion since 2018. Takizawa’s winning streak consists of a spectacular flying-knee knockout over Hayato Ishii, and he looks to shine in his sophomore appearance with the promotion. Ougikubo, who appeared on the UFC’s The Ultimate Fighter reality series during its 24th season, looks to bounce back from a knockout defeat courtesy of Kai Asakura as he enters the Rizin ring for the fifth time.

The MMA portion of the RIZIN.25 card also features the return of Kotetsu Boku, a 40-fight veteran who is out to snap his four-fight skid when he goes up against Rikuto Shirakawa. Shirakawa is also looking to snap a losing streak of his own after a TKO defeat in his promotional debut left him with back-to-back losses.

In addition to the MMA offerings, RIZIN.25 serves up four kickboxing bouts. This segment of the card is highlighted by a catchweight showdown at 60.5 kilograms between Taiga Kawabe and Yuma Yamahata. Taiga is looking to bounce back after suffering three defeats, while Yamahata would like to extend his two-fight winning streak and post a successful Rizin debut.

RIZIN.25 takes place early on Saturday, Nov. 21, with action beginning at 1 a.m. ET. The card, which consists of six MMA bouts and four kickboxing contests, can be seen on the promotion’s own Rizin Live streaming platform.

After a strong run of seven victories under the Rizin banner, Mikuru Asakura is now set to fight veteran Yutaka Saito for the league’s featherweight championship. How likely is Asakura to walk away as the new titleholder?

Saito is inarguably one of the most well-rounded Japanese mixed martial artists currently active in the featherweight division. The 33-year-old Saito is a 24-fight veteran who has compiled an impressive 18-4-2 record and has finished five of his last seven wins by either submission or knockout. He has evolved into a stellar finisher in the back half of his career while displaying immense power and a relentless pace. Saito’s best weapon of late has been his razor-accurate straight right that has found the chins of numerous opponents. Saito has captured the Shooto featherweight and lightweight titles while defeating notable names including Caol Uno and Yoshifumi Nakamura (twice), making him one of the most complete and decorated fighters to step foot in the Rizin ring. To further advance his legacy, he must now capture the Rizin featherweight championship while taking on one of the promotion’s most prominent rising stars.

Asakura, the old brother of current Rizin bantamweight champion Kai Asakura, has been nothing short of spectacular in his two and a half years with the organization. He has cemented himself as one of the company’s brightest young stars. The 28-year-old Aichi native has scored wins over such notables as Daniel Salas, Yusuke Yachi, Hatsu Hioki and John Teixeira during his Rizin campaign. Now, he looks to make it eight in a row.

If you have not seen Asakura’s head-kick knockout of the aforementioned Hioki, it’s worth the visit to YouTube. Asakura has an extremely well-rounded game. He boasts numerous weapons in his striking arsenal and an innate ability to transition his game to the ground when he sees fit. His most lethal weapons include a power left kick that he throws from his natural southpaw stance and consistently switches up to his opponent’s legs, body and head. He also possesses a powerful counter left with which he constantly catches his opponent as they dart forward in an attempt to close the distance. Asakura is very comfortable exchanging on the feet, where he baits his opponent into wild striking exchanges before catching them with accurate yet powerful shots that usually send them to the canvas in a matter of seconds. He’s facing his toughest test to date when he meets Saito.

Saito is considerably more experienced than a majority of Asakura’s past opponents. Yet, both of these guys are well-rounded combatants who have utterly decimated their foes with fluid striking, thunderous power, and an ability to finish fights in spectacular fashion. Despite Saito’s experience, it will be Asakura who walks away from this bout as the featherweight champion. He will come out aggressive once the bell rings, firing off a variety of kicks to slow Saito’s forward attack. Saito will look to throw his powerful right hand and perhaps tie up Asakura in an effort to get the fight to ground. However, Asakura will be able to circle out and consistently fire off his signature kicks and counter left, further frustrating Saito and causing him to question his game plan. Asakura will effectively repeat this round after round before capturing the belt via unanimous decision.

Will Hiromasa Ougikubo score a rebound victory when he clashes with Kenta Takizawa?

Ougikubo’s Rizin career has been quite strange. The longtime Japanese verteran has compiled a 2-2 record with the company. Both of his wins came by way of closely contested split decisions against Yuki Motoya and Shintaro Ishiwatari. Those victories landed Ougikubo a bantamweight title bout against Kai Asakura at RIZIN.23. From the opening bell, it was apparent that Ougikubo was going to be significantly outmatched against the taller and more confident Asakura. Asakura consistently landed long and accurate strikes while backing up the smaller Ougikubo the entirety of the first round. The end came with roughly 30 seconds left in the first frame when Asakura landed a brutal knee that sent Ougikubo to the canvas. Asakura followed his onslaught with a pair of brutal soccer kicks that officially led to a first-round knockout. Now, Ougikubo is set to face another tall knockout artist.

Takizawa is set to make his sophomore appearance with Rizin after defeating Yuto Hokamura via split decision in his promotional debut less than two months ago. The 16-fight veteran has compiled an 11-5 card and has finished eight of his 11 wins by some form of knockout. Takizawa was certainly gun shy in his Rizin debut, but he eventually opened up and fired off his power right kick and left hook to work his way to a split-decision victory. He now gets a significant step up in competition in Ougikubo.

This bout will entirely depend on how Takizawa chooses to approach the match-up. He holds a distinct reach and height advantage, both of which should allow him to fire off his jab and kicks almost at will against the shorter Ougikubo. The TUF alum Ougikubo will need to close the distance to mount any successful offense. Takizawa will utilize his approach and deliver a long and painful night for Ougikubo, who will absorb a vast amount of damage to the legs and body on his way to a unanimous-decision loss to Takizawa.

What should MMA fans know about the kickboxing fights in this lineup?

The kickboxing portion of the card is made up of four fights featuring names such as Jim Mandokoro, Taiga Kawabe and Yuma Yamaguchi. The feature bout of the evening is the 60.5-kilogram catchweight affair between Taiga and Yuma Yamahata.

Taiga, who was once riding high at 20-4, is looking to snap a three-fight skid and a 1-8-1 stretch through his last 10 fights. Yamahata, meanwhile, enters the ring for the fourth time in 2020 after compiling a 2-1 record through his first three fights of the year. The Deep champion is currently riding a two-fight winning streak entering his Rizin debut.

All four kickboxing match-ups should prove to be wildly entertaining as the combatants look to dazzle fans with spectacular finishes and entertaining exchanges.

Despite a fairly significant main and co-main event, expect the welterweight clash between Ryuichiro Sumimura and Gota Yamashita to steal the show. This clash is sure to end in excitement as Sumimura and Yamashita look to make powerful statements in the Rizin spotlight.

Sumimura enters the ring for the first time since December 2019, when he suffered a first-round knockout courtesy of Jon Tuck in his Bellator debut. The 34-year-old welterweight is eager to return to his winning ways after compiling a seasoned 15-7 record and a 60 percent finishing rate.

Yamashita makes his Rizin debut after compiling a 10-2-1 professional record in organizations including Pancrase and Shooto. He is currently riding an impressive four-fight winning streak that includes victories over Kenta Takagi, Yuki Kondo and Akihiro Murayma. Expect the “Let’s Gota” to come out looking for an impressive finish and officially announce himself to the Rizin community.