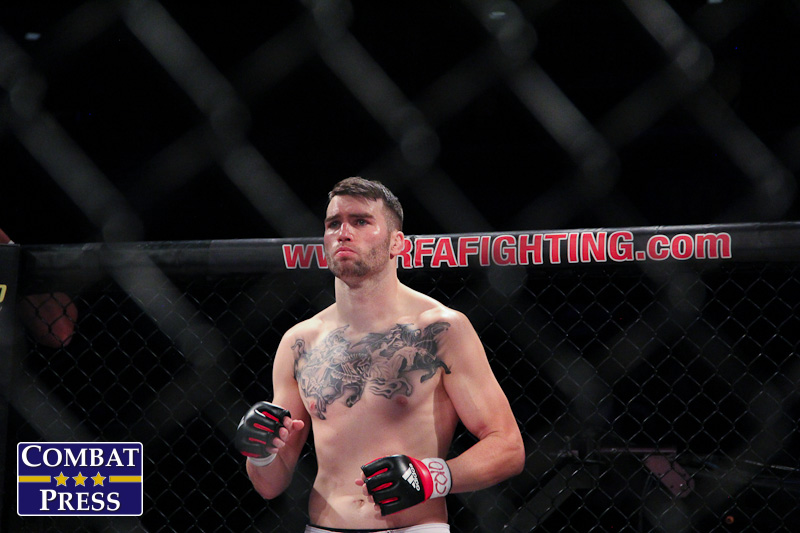 Mantodea is an order of insects that are more commonly referred to as the mantis. Most of the 2,400 species of mantises are ambush predators. They are very difficult to see, as they blend in with their surroundings, but when they attack, they are one of the most violent and deadly creatures on earth.

UFC fighter Brian “The Mantis” Camozzi fits his moniker in a very scary way. He is unassuming, mild-mannered, easy to talk to, and if he called you regarding insurance, you would never know that he is 7-3 as a professional fighter, holds welterweight titles in the Resurrection Fighting Alliance and Sparta Combat League, coaches Muay Thai at a high-level MMA gym, and has finished his opponents in all of his wins. Of course, this is all coming from a guy who works for State Farm.

“I’ve been working a day job and coming to the gym every day,” Camozzi told Combat Press. “It’s not a very exciting life. I wish I could tell you I do a bunch of cool stuff, but, unfortunately, I sit behind a desk and stare at a computer and then I come work out, and that’s about the end of the day.”

Camozzi’s life is a little more exciting than he will lead people to believe. First, he is part of a stacked fight team at Factory X Muay Thai in Englewood, Colo. In addition to his usual training partners, including his brother and UFC vet Chris Camozzi, he has the opportunity to train with other industry vets like James Krause, Brian Foster and Cortez Coleman. Second, he is getting ready for the second fight on his UFC contract, which takes place this Saturday night at UFC 213, the headlining event of International Fight Week in Las Vegas.

For his first UFC fight, which took place at UFC Fight Night 102 in December, Camozzi faced former Ring of Combat welterweight champ Randy Brown. Camozzi was so happy to enter the UFC cage that he got somewhat lost in the moment and was stopped for the first time in his career. He learned a lot from his promotional debut.

“I got a little wrapped up in finally being in the UFC,” Camozzi explained. “You could see it when I walked out. I was happy and smiling, and I’m not usually like that. I finally got rid of that. Obviously, Randy’s a good opponent, and he’s tough, and he’s super long. I thought I was at a good distance, but he was still cracking me where I was, so that was a tough adjustment. I had a hard time with that one.”

The Mantis did not get his prey in his UFC debut, but the opponent was no slouch either. Brown was 2-1 in the UFC, 8-1 overall, and had a height and reach advantage. For Camozzi’s next opponent, those tables will flip a bit.

Camozzi was originally slated to fight veteran Alan Jouban, who also came out of the RFA circuit. However, that fight fell through and Camozzi will now meet another UFC vet, Chad Laprise, the winner of The Ultimate Fighter Nations: Canada vs. Australia. Laprise normally fights at lightweight, but an injury suffered by Jouban caused him to step into this welterweight affair. Camozzi will have a significant size advantage over the Canadian, and he has no qualms about facing another promotional veteran.

“Obviously, he’s coming up from 155 [pounds], so he’s quick. He’ll be faster than me, probably. He’s shorter. It’s a little different, going from Jouban, who’s a southpaw, to Chad, who’s a righty. We had to change that up a bit, but luckily, we found out with plenty of time, so it didn’t make too big of a difference. Chad’s a quick guy, he’s got good boxing, and, from everything I’ve seen, he likes to stay on the feet and he’s got good takedown defense. He seems pretty well rounded. I haven’t seen much of his ground [game], but I believe he’s a purple belt, so I’m sure he’s no slouch there either.”

Camozzi not only felt the initial Octagon excitement was a factor in his fight with Brown, but he also felt a bit of disconnect in his game. MMA may be a sport of different fighting modalities, but the art comes from bringing them all together synergistically. Knowing Laprise is also good everywhere, his focus for this camp has been on becoming a better overall fighter.

In the mind of Camozzi, there is no “next fight.” He understands that a win over Laprise will open up many doors, and like a true mantis, he is laying low, not trying to get too cocky or excited, and waiting for his chance to strike.

“It’s going to be a fun fight,” Camozzi said. “I like to think of myself as exciting. I’ve got a 100 percent finish rate [when I win], and when I do go to decision, which is rare, it’s still an exciting fight to watch. I’m not out there to be boring. I’m out there because I want people to want to watch me fight, regardless of whatever happens. So, tune in and watch, and I’m hoping to walk out of there with a bonus.”

Camozzi and Laprise will fight on the UFC 213 preliminary card on Fox Sports 1 at approximately 9 p.m. ET. Tune in to see the Mantis do what a mantis does.

Camozzi would like to thank all of his coaches and training partners at Factory X and Landow Performance, as well as his family, friends, fans and sponsors: LivWell and Revivid Sports. Follow Brian on Twitter: @BrianCamozzi
Advertisement