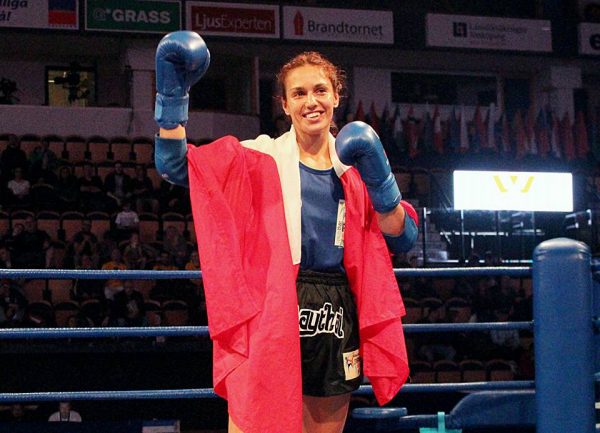 Lion Fight 30’s Antonina Shevchenko: It Runs In The Family

A family can be a very powerful force. Bloodlines create a unique bond that cannot be explained. They think alike, they eat alike, and, often, they live alike.

Multiple-time world champion Muay Thai and kickboxing athletes Antonina and Valentina Shevchenko grew up as two very close sisters in a fighting family. Together, the two have trained and competed all over the world for over 13 years. They were introduced to the world of striking arts at a very young age by their mother, Ellein Belova. The bond between these sisters can be a difficult one to break, but their opponents… Well, that’s another story.

That story consists of a fair share of knockouts to go along with several dozen tough fights that went the distance. In over 30 contests, Antonina, the elder of the two, has only lost once.

“It was one of my first professional fights in 2003,” Antonina told Combat Press. “I fought in Oman, and the girl was a world boxing champion, and that was my only loss.”

At the time of the loss, Antonina was only 18 years old. She hasn’t looked back since. Fighting is in her blood.

“Training is a family tradition,” Antonina said. “My mom is a sportsman. She’s a third dan black belt in taekwondo, and she’s the president of the Kyrgyzstan Muay Thai Federation. She wanted us to train also in martial arts and to have martial arts in our lives.

“I started to compete very young. At eight years old, I already had a diploma for martial arts.”

Throughout the last nearly three decades, the sisters Shevchenko have trained alongside each other. Their primary home and training takes place in Lima, Peru, but they also train at the famed Tiger Muay Thai camp in Thailand. This Friday night, Antonina fights for the lightweight title at Lion Fight 30. In two weeks, her sibling Valentina fights former UFC bantamweight champ Holly Holm in an MMA showdown. Since both fights take place in the United States, the sisters have spent some of their recent camp on U.S. soil.

“I am training in Houston, Texas, now,” Antonina said. “We train at Houston Muay Thai and Gracie Barra Texas – Draculino. Me and my sister are training together now. Right now, I’m just training in Muay Thai, because I am very focused on my fight. I train in MMA, as well, but for this fight, I am focused on Muay Thai.

“Me and Valentina are very good friends, because our whole lives we have spent 100 percent together — we live together, we train together. We give each other support, and she is my younger sister, so I am very happy for her and she is very happy for me too.”

While Valentina has a tough task ahead of her in the UFC, Antonina is gearing up for her own dream fight. Lion Fight is the top Muay Thai promotion in the United States, and to get a title shot in her promotional debut was a no-brainer.

“The first time I met the president of Lion Fight, Scott Kent, we met in Las Vegas,” Antonina explained. “He talked with me and my manager, Roger Allen. After that, they called and offered the fight and, of course, we accepted.”

Annabelle Gely, a French-born former European Muay Thai champion who trains in England, will stand across the ring from Antonina on Friday night.

“She’s a strong fighter. She’s a champion in Muay Thai, and she fights in traditional Thai style,” Antonina said. “She has a strong clinch.”

Antonina has big hopes for her new relationship with Lion Fight. She plans on becoming a champion and keeping it that way for a long time. However, unlike a lot of fighters with this level of pedigree, she is very humble in her expectations of her upcoming battle.

“In this fight, I will give 100 percent to win the fight,” said the elder of the Shevchenko sisters.

That’s it, plain and simple. For someone that hasn’t lost in 13 years, this could pose a big problem. Gely is no pushover, but Antonina is an icon. The native of Kyrgyzstan is focused and determined to get the belt. Yet, as focused as she might be, she and her sister do find a few moments to get away from camp and explore the many countries they train in.

“I like being in Texas very much,” Antonina said. “When we are not in training, we are walking around, exploring beautiful places and beaches — Galveston and Texas City. It’s very beautiful here. This camp, I’m here for one week. Before this, I was in Peru, because we live in Peru. Before that, I was in Sweden for the world championship of Muay Thai.”

The Shevchenko sisters have fought their entire lives and have no plans of slowing down. Both of them cross-train between Muay Thai, jiu-jitsu and MMA. Even though they are not currently training for the same sport, they train together every single day, preparing each other to eventually become world champions once again. Valentina has a big UFC fight coming up in two weeks. Antonina, meanwhile, is stone-cold prepared to capture the Lion Fight lightweight strap this Friday night at Lion Fight 30. They’re both ready to continue their story with another set of broken opponents.

Antonina would like to thank all of her coaches and training partners in her many camps. She would also like to thank her mother, her sister, and all of her family and friends. Follow Antonina on Twitter: @KO_Antonina
Advertisement