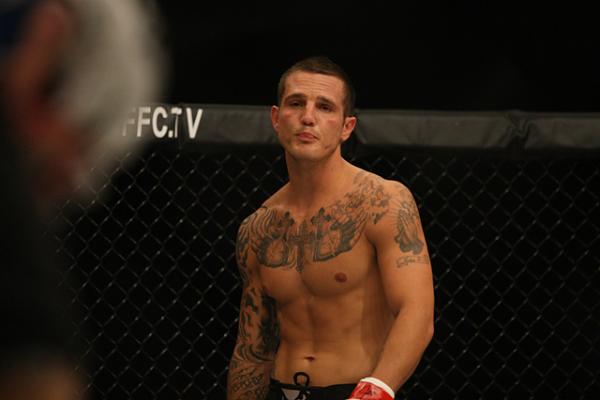 They say a champion isn’t truly a champion, regardless of the sport, until he defends his crown. Shogun Fights welterweight titleholder Micah Terrill adheres to that philosophy, which is why his first title defense can’t come fast enough.

Terrill will defend his belt against Jon Delbrugge at Shogun Fights 14 in Baltimore on Saturday, April 16. Terrill was crowned champion after defeating Jeremy Carper in just 46 seconds at Shogun Fights 13 last year. His victory also included a bit of redemption, as Terrill came up short in his bid to win the belt the first time at Shogun Fights 12.

“It feels good, but it doesn’t feel real,” Terrill told Combat Press. “I’m hard on myself, so I have to defend the belt. But once I beat Jon, it’ll feel real.”

Terrill said he “felt great” going into his title fight against Carper, and it showed with his dominant performance.

“I knew Jeremy was a stand-up guy, but Muay Thai guys tend to cover up when they get hit,” Terrill said. “I hit like a freight train, so I knew Jeremy wouldn’t uncover and the ref had to stop the fight.”

Terrill hired a new coach and recruited new fighters to help him train for his title defense against Delbrugge, and Terrill described his training as similar to that of a “Division I baseball team.”

“The whole team came in, and I’ve been in the gym constantly,” he said.

Terrill also helps run programs at his gym, Conquest BJJ in Crofton, Md., and participated in some cross-training in advance of his next fight.

“I feel I am much more mature,” Terrill said. He attributes this to being a husband and a father to his 18-month-old son. “I’ve made some mistakes, but once I win, I’ll be back to where I need to be.”

Terrill requested this fight against Delbrugge. While he’ll admit that Delbrugge has great jiu-jitsu, Terrill plans to take advantage of his reach.

“I’m just going to punch him in the face,” Terrill said. “This isn’t a grappling match or wrestling match or a Brazilian Jiu-Jitsu match. He will not take me down. I’ve fought a wrestler before and I knocked him out, so I know what to expect. I’ve trained nothing but takedown defense.”

Terrill is excited to once again perform in front of the Shogun Fights crowd. He credits the promotion’s founder, John Rallo, for continuing to raise the organization’s profile in Maryland and beyond.

“It’s eye-opening to see how much it’s evolved,” Terrill said. “It’s sport in its purest form. We’re not trying to kill each other. It’s a great thing for the state and for people to see MMA in a different light.”