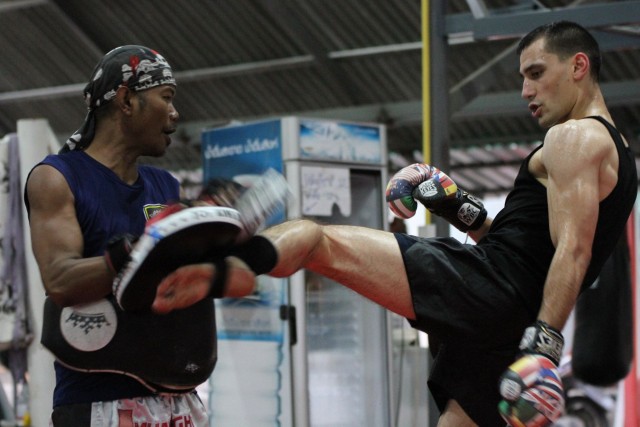 A fine meal is a perfect metaphor to use in order to explain the intricacies of becoming a professional fighter. The end result is always exquisite. It’s what everyone remembers. Yet, it’s in the hard work of the chef behind the meal where the real work is done.

For amateur kickboxer Tode Tošo Dmitrovic, that work has been 10 years in the making. Dmitrovic will be competing at the upcoming GLORY kickboxing event, GLORY 27, which takes place on Feb. 26 in Chicago. For someone competing at the amateur level, a slot on a GLORY card is a godsend.

“For me, GLORY is the biggest name in kickboxing,” Dmitrovic told Combat Press. “Even just being on the undercard is super exciting.”

Dmitrovic brings a Muay Thai base to the GLORY ring. While most kickboxing fans know what to expect from a fighter with this background, Dmitrovic isn’t a stereotypical Thai fighter.

“I did some taekwondo and karate too, but I felt Muay Thai was the most well-rounded martial art,” Dmitrovic said. “I’ve been training in Muay Thai for 11 years.”

There are no elbows allowed in the GLORY ring and clinches are broken up if a strike is not thrown within seconds of being tangled up. We’ve seen some fighters who come from a similar Muay Thai background and struggle with these restrictions. There’s been one notable exception: Sitthichai Sitsongpeenong. The Thai fighter nearly took the lightweight title from Robin van Roosmalen at GLORY 25, losing a decision that many fans felt he rightfully earned. Sitsongpeenong showed that with the right adjustments a Thai fighter can succeed in the GLORY ring.

“I think my strongest assets are my combinations — my punches mixed with kicks,” Dmitrovic said. “Honestly, I don’t really like clinching, so it works out perfect for me.”

What doesn’t work out perfect very often for Dmitrovic is the local fight scene. Whereas MMA fighters can typically find a fight without much issue, there is a severe lack of amateur kickboxing promotions. Often times, those with kickboxing or Muay Thai aspirations have to take fights on local MMA cards, where the competition is mixed at best. Occasionally, you’ll see a pairing that features two fighters who know what they’re doing, but more times than not it’s simply a group of MMA fighters who want to avoid the grappling exchanges in an MMA contest.

“Finding fights on the local scene is definitely the most challenging aspect of being an amateur kickboxer,” Dmitrovic said. “Even when you can get a fight, it’s not very often and not always the best match-up.”

Making the most of every opportunity is a priority for those looking to turn pro in kickboxing. Luckily for Dmitrovic, he’s already received exponentially more exposure than the majority of amateur fighters receive. In 2014, he landed a highlight-reel finish that made its way to BJPenn.com and other media outlets.

“That was really exciting and unexpected that they would put that up,” Dmitrovic said. “It was an awesome experience. They’re a pretty big outlet.”

Although a TV spot isn’t in the cards for Dmitrovic this time around, fans in attendance will certainly be in for a show. His fights typically aren’t of the “bathroom break” variety.

“It’s going to be a super exciting fight,” Dmitrovic confidently said. “There won’t be any stalling; you’re going to get your money’s worth.”