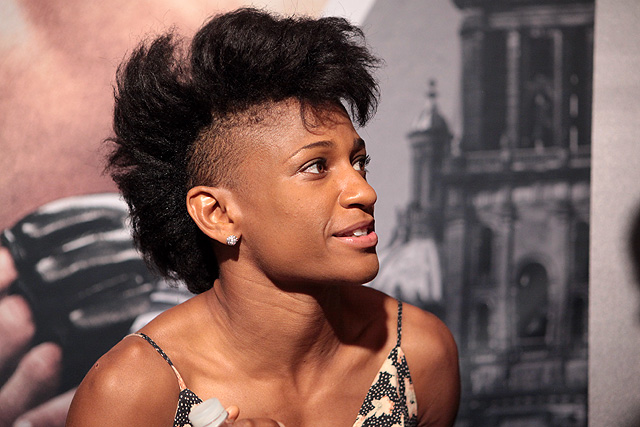 Angela Hill boasts quite the mixed martial arts career, despite only having four professional fights on her resumé.

From competing for the inaugural UFC women’s strawweight title on season 20 of The Ultimate Fighter to facing some of the best strawweight fighters around to being released by the UFC, all in just over a year, you might expect Hill to be a little jaded about her career. But then, you wouldn’t know Hill.

“It was a nice breakup,” Hill said of her release from UFC. She received a phone call from UFC matchmaker Sean Shelby following her loss to Rose Namajunas in October informing her of her release.

“Leaving was bittersweet, and I can grow, but I still feel I deserve to be there,” Hill told Combat Press. “Sean seemed really sincere and genuine, and told me to keep in touch and that hopefully they can bring me back.”

However, Hill isn’t waiting on the sidelines for that call. She signed with Invicta FC in November and will make her debut at Invicta FC 15 on Jan. 16 against Alida Gray, who steps in to replace Hill’s original opponent, Jodie Esquibel.

Hill watched Invicta prior to joining the UFC. She likes how Invicta “promotes and matches people fairly. They take care of their fighters.”

Hill can also boast some prior experience against Invicta athletes. Several of her fellow competitors on The Ultimate Fighter fought in the promotion. Hill’s first fight on the show was a loss to former Invicta and UFC women’s strawweight champion Carla Esparza, and the show featured other former Invicta fighters, including Namajunas, Bec Rawlings, Felice Herrig and Tecia Torres.

“It was pretty crazy,” Hill said. “I was surrounded by big names and was a little starstruck. It was a really cool experience.”

Hill found her way on the show before she even had her first MMA fight. She was training and fighting Muay Thai in New York when she heard there would be an all-female season of the reality series. She was contacted by a coach in North Carolina who offered to have her come train at his gym in exchange for receiving assistance to try out for the show.

“My first MMA fight was two days before tryouts,” Hill said. “I won and flew to Vegas the very next day. I was told [UFC President] Dana White was impressed with my pad work.”

Although Hill faced some of the very best fighters at strawweight early in her MMA career, she didn’t feel at all overwhelmed by the experience.

“I think I’m not that far away from the top,” Hill said. “But it was an eye-opener to get some of the top fighters. A lot of champions start with poor opponents for their first two to three fights, then they strike gold and find their rhythm.”

Hill looks to fighters like UFC featherweight champion Conor McGregor for inspiration as she seeks to regain her footing in MMA.

“He lost a couple times early in his career, then started smashing people,” she said. “The harder road will make me a better fighter.”

Hill recently relocated her training to Alliance MMA in San Diego, and she said being around more fighters, particularly female fighters, with more experience allows her to have “a good look at what I can and can’t get away with.”

For right now, though, Hill is taking things one fight at a time and is very happy to call Invicta her new home.

“The fans in Invicta are more welcoming,” she said. “I like having no pressure and not having to worry about if this fight will make or break my career. I’ll play it by ear and if all goes well, I can have options.”