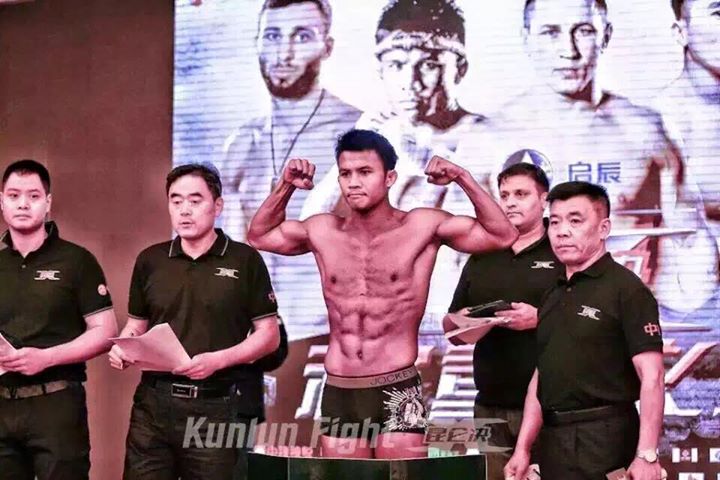 On Wednesday, Oct. 28, the Kunlun Fighting Championship debuted in Dazhou with Kunlun Fight 32 from the Daxian Stadium in Sichuan, China.

In the evening’s main event, Muay Thai’s most popular fighter returned to the Kunlun FC ring for the second time. Thailand’s golden boy Buakaw Banchamek (formerly Por.Pramuk) showed he was far superior to his opponent, 26-year-old Chinese fighter Gu Hui. It took only one minute before Hui hit the floor as the result of a perfectly timed right high kick from Buakaw. The lightning-fast strike appeared to signal the end of the fight, but Hui stumbled his way up to make the count and continue the fight. Buakaw decided to hunt for the victory, slamming multiple front kicks, knees and right straights to the face and body of the Chinese fighter. Hui stayed the aggressor as Buakaw showed superior clinch technique against the ropes. Buakaw moved his head just out of the way of Hui’s strikes, never taking a significant strikes throughout the bout. A huge series of about six or seven knees in quick succession to the midsection started to wear on the Chinese fighter. Buakaw quickly put an end to the bout with a pair of knees while backing up toward the ropes. The second-round technical knockout was a dominant performance from start to finish.

Former GLORY lightweight champion Kiria returned to his winning ways with his 24th career victory just four months after his June 2015 knockout defeat at the hands of No. 2-ranked lightweight Sittichai Sitsongpeenong in GLORY 22’s lightweight contender tournament. The victory was just one more step toward Kiria re-establishing himself as one of the world’s best lightweights. Kiria earned his GLORY title with a fifth-round knockout victory over Andy Ristie at GLORY 14 in March 2014. Kiria could possibly avenge his defeat at the hands of Sittichai, who has also advanced in Kunlun FC’s 70-kilogram tournament. Sittichai fights champion Robin van Roosmalen at GLORY 25 on Nov. 6 for the GLORY lightweight title.

Nagbe previously lost to Dzianis Zuev in the semifinals of the 2014 Kunlun FC 16-man 70-kilogram tournament. Zuev lost in the quarterfinals to Mustapha Haida, but he re-entered the tournament when the Moroccan fighter couldn’t continue due to injury. Zuev defeated Aikpracha Meenayothin with a right hand to move into the finals against the Australian Nagbe. Zuev took the judges’ decision and the tournament championship to the surprise of Nagbe. On Wednesday night, Nagbe would change his fortune in the rematch, earning a decision victory after an extension round.

Chinese Sanda national champion E Meidie earned her 30th career professional victory after two tournament bouts in one night. E Meidie battled with French Muay Thai star Anissa Meksen for five rounds in the eight-woman, 52-kilogram tournament final. The fight was declared a draw after three rounds, sending the match into an extension round. The fourth round was also declared a draw. The second extension round ended with E Meidie getting her hand raised in front of her home country’s fans. E Meidie defeated Dutch kickboxer Isis Verbeek by decision in the semifinals, dropping Verbeek’s record to 44-5. Meksen defeated Xu Zhurong by decision in her semifinal bout, earning her 84th career victory while handing the young Chinese fighter her second career defeat in nine bouts.

The “KO Queen” Wang Kehan continued her dominance in the women’s 60-kilogram division, moving her record to 27 wins with only one defeat. She defeated German fighter Michaela Michl. Wang made her return to the ring after a March 2015 knee injury kept her from competing. Wang is one of Chinese kickboxing’s most popular female fighters after winning titles in the largest promotions in China, Wu Lin Feng Championships and Kunlun Fight. Wang is considered one of the best 60-kilogram female fighters in the world, having lost only to her training partner and fellow top female fighter Jemyma Betrian, who herself holds an impressive career record of 35-2-1.

Below are the full results of the evening, courtesy of Kiksie.