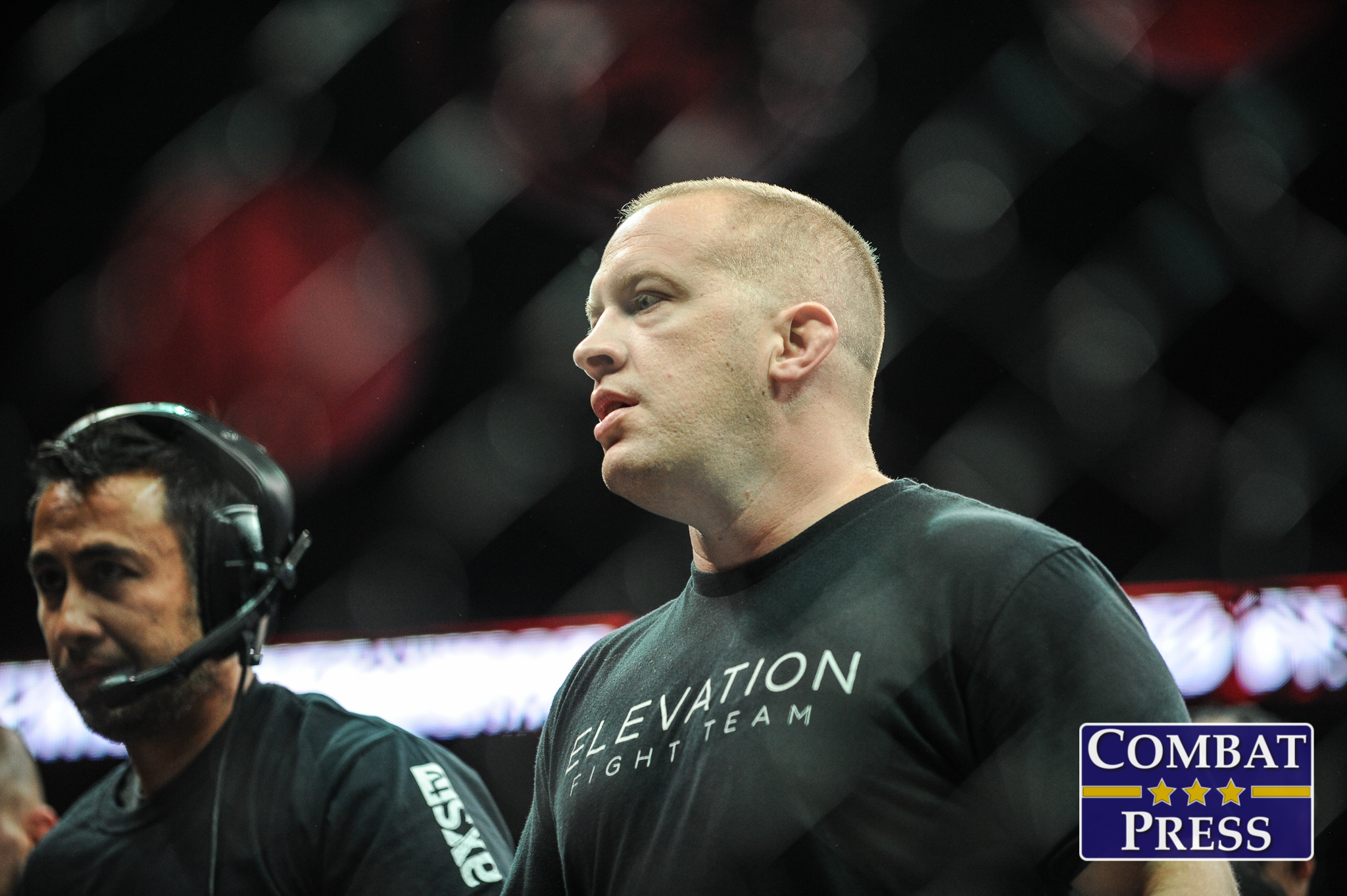 Elevation Fight Team may be the new home for UFC bantamweight champ T.J. Dillashaw, but the gym already houses a collection of elite-level athletes. The facility features plenty of flash, which is offset by the modest nature of the team’s wrestling coach, Leister Bowling.

The team holds their practices within a world-class facility that’s completely outfitted from the supplement company MusclePharm. Mixed in with the drops of sweat from the athletes are the colors of neon green and black, MusclePharm’s signature design, featured on nearly every square inch of the facility. The quality of MusclePharm’s Sports and Science facility is part of the allure for fighters looking to train with the Elevation Fight Team.

“I’ve been around athletics my whole life and the MusclePharm facility is by far the nicest facility I’ve ever been in,” Bowling told Combat Press. “It’s 40,000 square feet. Everything is state of the art.”

There’s also more going on outside of just a large facility and updated training equipment.

“They have a testing room where they can check your body fat and make sure you’re not losing muscle mass during a fight camp,” Bowling explained. “They have a full recovery room with hot tubs, cold tubs, a sauna, therapists on-site and a theater room for us to study film on.”

While the glitz and glamour are enticing to the eyes, Bowling believes the best part of the team is something that can’t be measured in monetary value.

“The best part is that it’s a private training facility,” Bowling said. “It’s what enticed me to go there three years ago when we started our team. It’s nice, when you’re a professional athlete, to not have to worry about hustling off the mat for a kid’s class.”

Elevation Fight Team has flown under the radar, yet it manages to attract a number of high-level fighters. Even before switching his camp full-time to Denver, Matt Brown had already been working with the team for his previous camps. Donald “Cowboy” Cerrone also manages to get some time in at the gym. Bowling had previously stated he’s not actively recruiting guys to his team, so what’s his magical formula for getting high-level athletes to leave their comfort zones?

“Honestly, it’s a pretty simple concept from the get-go,” said Bowling. “MusclePharm has been behind us and we don’t have to pay bills to keep our lights on. And, as coaches, we’re able to put the fighters first and not run a business for the coaches. We’re all former athletes and understand that it has to be fighter first, especially in an individual sport. It has to be about the fighters. I think our fighters appreciate that they don’t have a coach that’s trying to be famous off their backs.”

Bowling and Elevation Fight Team have been going strong for the past few years since the team was created. They have been able to avoid the ups and downs that are typical of new gyms. A perfect example was the Blackzilians camp, which had a rough start combined with quite a bit of turnover in both fighters and coaches.

“I truly think our success is because we’re homegrown,” Bowling said. “We’ve had guys come in for camps — like Matt Brown — but Neil Magny pretty much started his career with us after The Ultimate Fighter. Brandon Thatch and Tony Sims grew up in Colorado. Drew Dober joined our team right when he got signed with the UFC.”

Bowling is clearly modest about his team’s success, but his modesty ends when discussing guys who compete every day on the mats inside the MusclePharm facility.

“Tony Sims is a guy that’s going to be a household name soon,” proclaimed Bowling. “That guy is a monster. Cory Sandhagen has been one of T.J.’s training partners for his last three camps, and he’s someone people are going to hear about. Jarred Mercado fought for the RFA belt. And we have Sonny and Cody Yohn, who are All-Americans from the University of Minnesota.”

The team now has a world champion under its roof, along with a talent-stacked roster that features guys who can contend now and in the future. The gym may not be associated with MMA’s best in some circles, but fans should be on the lookout for the talent coming out of Denver.