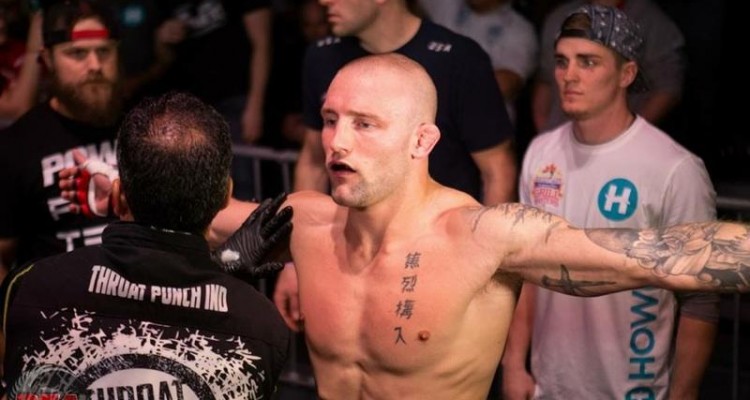 RFA 29’s Jordon Larson: Getting Comfortable With the Uncomfortable

Tonight at Resurrection Fighting Alliance 29, the crowd is going to be loud and crazy. The promotion is a huge hit when it comes to South Dakota. The state also loves native son Jordon Larson, who happens to be fighting in the night’s co-main event. RFA’s Director of Communication Ryan Bevins even boasts that Larson “has received the two largest ovations in RFA history.” That is a pretty big statement considering the RFA has produced some big names in the past.

Larson, who was born and raised in Sioux Falls, loves the energy from his hometown. Tonight might mark the biggest crowd reaction yet. Larson’s opponent, Ackson Junior, hails from Brazil and yesterday missed weight by four pounds for the pair’s scheduled welterweight contest. With all that taken into consideration and Larson fighting in the second-to-last fight of the night, the building might come crumbling down when Larson’s music hits the sound system.

“Fighting is Sioux Falls is pretty crazy,” Larson told Combat Press. “I think the last two times I have had the loudest walkouts, or standing ovations, that RFA has ever had. The electricity in that place is nuts. A majority of those 4,000 people there, I am at least acquaintances with, and a big portion of those are family and friends. You can really feel the electricity and the energy that is in the building when you are walking out. It’s pretty crazy and it is also nice.”

Larson’s first fight in South Dakota for RFA came almost exactly a year ago at RFA 17. That night, he took on Donavon Winters and secured the unanimous decision victory. But when it came time for him to walk out to the cage for the fight, what he heard was not what he was expecting.

“The first time was kind of overwhelming a bit,” Larson recalled. “It definitely got me a little too hyped up. Second time around, at the last fight, I was a little more use to it. I really didn’t block it out; I just embraced it, but stayed calm and able to do what I needed to do. But I love it. Like I said, I can feel those guys are nervous [and] then it feeds into my energy for the fight.”

Prior to his RFA debut, Larson had last seen action in November 2012. The absence was not due to injury or anything of that nature. Instead, Larson was at work in Afghanistan. So, for him to receive such an ovation was something special.

“My job over there was to transport detainees. You learn to live in the uncomfortable,” Larson said. “You are in a spot where definitely these people do not like you. They’d rather see you dead. You would rather be home with your family doing all the normal stuff that you do. You have to learn how to be comfortable with the uncomfortable. I think that is something that I took away from being over there. Whether it’s training or in a fight, just continue the grind. Whether you are tired or you are hurting, you just got to continue to push through.”

Now, Larson is learning to live with a new uncomfortable.

Larson moved his training camp to the world-renowned Power MMA in Phoenix. Power MMAhas some of the biggest names in mixed martial arts, and even more so now that guys like Myles Jury and others have moved to the gym from Alliance MMA in San Diego.

“It’s going great. I got down here in November. I have improved. It is a night-and-day difference,” Larson said. “I really like how we have a really structured, sound team atmosphere. We have really good coaches. Aaron Simpson is our head coach. Chaz [Turner] is our striking coach. Chaz has done wonders for me. I have improved. Like night and day from where I was at. It is just the little things. Not that I didn’t like my old gym — I loved it [and] I had a great coach — but the amount of training partners that I have here really helps me elevate my game and they correct and implement little techniques that help my game. It is like going from high school wrestling to college wrestling. That is the only thing I can compare it to, just the overall competition in the gym and the knowledge that is around every single day.

“Not to mention, we are kind of spoiled here. We have a huge gym and we have a great strength and conditioning coach in Coach [Jason] Kamens to get us primed and ready to go, getting us at peak level at the right time. It makes it a lot easier when it comes to weight cut[ting]. You are not having to fight to make weight prior to the actually fight. You can focus on the fight up until weigh-ins. We also just got a good group of guys that came over from Alliance MMA. There is not one ego in the gym. Everybody is there to learn and get better and help everyone out. I definitely feel I am at the right place.”

Larson’s opponent is a high-level fighter out of Brazil. The 33-year-old Junior is undefeated through five fights, and he has finished all of his opponents.

“The fights that I have seen of his, when he goes into the second round, he seems to be a different fighter,” said Larson. “It looked like some fatigue sets in. I have been in the third round before. I have stopped fights quick before. But it doesn’t bother me that he only has been out of the first round once.”

This is where Larson’s team figures into the equation.

“It gives you a sense of comfortability,” Larson explained. “The things you see every single day — there is nothing new that you will see in a fight that you have not already seen during training. With the training partners that we have, someone brings in something new every day. It’s not going to be anything new. It just makes it seem like another day in the office.”

There’s also the factors of the fight’s location and the accompanying time difference, a variable which may have become evident when Junior missed weight yesterday afternoon.

“[MMA is] just under soccer down there [in South America] for popularity wise when it comes to the sport, so I am sure he has fought it front of some big crowds. But I think he has gotten used to being the fan-favorite,” Larson said. “I know this crowd is going to give him some boos. I am sure that is not going to bother him too bad — he seems like a really good professional.

“I think the nine-hour time difference, that time difference is no joke. Having to come over to America and fight, that is going to be something that he is going to have to deal with. As for the crowd, he will definitely know that I am the crowd favorite for sure.”

Jordon would like to thank his friends and family, Max Muscle, J&R Heating and Cooling, and Ink and Iron Tattoos. Follow Larson on Twitter: @Jordon_Larson
Advertisement