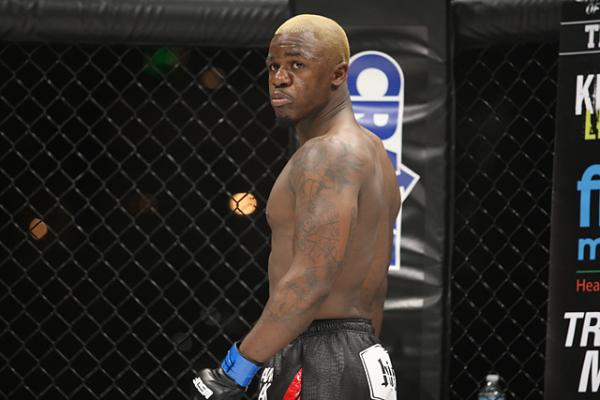 As the MMA world collects its breath from the aftermath of “Rousey-mania,” Bellator’s latest offering looms on the horizon. The Bellator 141 card doesn’t feature a title bout or a strong headliner atop the lineup, yet the event is full of intriguing stories for MMA fans to take an interest in.

Mixed in among the preliminary action is one of the legendary fighters of women’s MMA making her return to the Bellator cage. Marloes Coenen last competed in October 2014 in a fight in which she defeated Annalisa Bucci to make a successful Bellator debut. The 34-year-old fighter has been competing professionally since the year 2000 and holds wins over women like Roxanne Modafferi, Sarah Kaufman and Liz Carmouche. Coenen’s opponent, Arlene Blencowe, has only been competing professionally for a little over two years and will have a significant disadvantage when it comes to experience. She does hold a victory over recent Invicta FC featherweight title challenger Faith Van Duin. The storyline to watch here isn’t necessarily the match-up itself, but rather the opportunity to watch one of women’s MMA’s biggest names compete. Although not a mainstream draw by any stretch of the imagination, Coenen does have the skills and name recognition among hardcore MMA fans to be the face of the Bellator women’s division.

Two heavyweight bouts kick off the main portion of Bellator 141.

Josh Burns faces off against Justin Wren in the first of these bouts. For many MMA fans who choose to look up Wren prior to the event, the only notable venture they’ll find that he’s made in the MMA world came in 2009 when he competed on The Ultimate Fighter: Heavyweights season. Wren lost to Jon Madsen at the live finale and was handed his walking papers soon after. Wren went on a three-fight winning streak in 2010, but he hasn’t stepped foot inside a cage since then. Instead, Wren’s story took him towards the Congo and “The Forgotten People,” as they’re called. A towering heavyweight fighter living amongst the Pygmies of the Congo, Wren completed numerous humanitarian efforts which where documented in an excellent piece by Kevin Iole. It’s not very often you see guys in the sport of MMA doing good for the world outside of fighting, and those who know of Wren’s backstory will surely have a vested interest in seeing his hand raised.

The second heavyweight tilt also features a fighter with a bit of an intriguing story outside the cage. Lorenzo Hood is a massively built heavyweight fighting out of the Blackzilians camp who will be making his Bellator debut. Hood became a noteworthy figure among MMA fans when he publicly declared that Bellator had an advantage over the UFC, a factor that heavily influenced his decision to sign with the promotion. Hood very easily could’ve rode the wave of attention gained by the Blackzilians to sign with the UFC, and given the lack of depth within the division, arguably could’ve been fast-tracked to a title shot. Yet, the heavyweight combatant chose to sign with Bellator with the promise of more financial gain. Outside of Hood being a top prospect and signing with Bellator, there’s the fight match-up itself. Hood has never fought past the first round in his career and more than half his wins have come in under two minutes. Similarly, Hood’s opponent, Raphael Butler, has earned four victories within Bellator by first-round stoppage. On paper, this fight has the makings to provide a highlight-reel finish.

Atop the Bellator 141 lineup are two bouts being contested in the lightweight division.

First, Patricky Freire will face Saad Awad in the co-main event. Freire has been a mainstay with Bellator since 2011 and has routinely been in some of the more exciting fights in the promotion. He packs serious knockout power and has the ability to create a highlight-reel moment in any round of a fight. Awad finds himself in a precarious situation at Bellator 141. He’s riding a three-fight winning streak and is squaring off against a fighter coming off a loss. It’d be a great feather in his cap if Awad can defeat the Brazilian and add another bargaining chip to Awad’s chances for a third contest against current Bellator lightweight champ Will Brooks. Awad knocked Brooks out in under a minute in their first meeting and Brooks took the rematch via unanimous decision. Awad has already been discussing a third fight between the two and it’s an easy sell for the Bellator brass to MMA fans. Freire has come close to winning a Bellator tournament on a couple of occasions and could very well be within a few fights of finally achieving a title shot. Awad, meanwhile, will look for the chance to face Brooks once again with title implications on the line. No matter who wins between these two, Bellator is the ultimate winner, as both men present a reason for fans to be invested in a potential showdown with Brooks.

Perhaps no other fighter will go down as having such a perplexing story as Bellator 141’s main headliner, Melvin Guillard. The former UFC contender has seen plenty of ups and downs throughout his MMA career. OK, maybe he’s had a few more downs than ups. Guillard was once considered one of the most promising fighters in MMA. His professional MMA career began in 2002, and 2011 was the height of Guillard’s ranking among his peers. Two quick submission losses put Guillard in a tailspin from which he’s seemingly yet to recover. He was able to pick up two wins, but a litany of losses and a no-contest litter his career from 2012 onward. Guillard’s cup of coffee in the World Series of Fighting left any fans he may have had from his UFC days with a sour taste in their mouths. Guillard enters Bellator seemingly on his last strike with the MMA world. He’s said all the right things heading into his Bellator debut, and at 32 years of age, he still has time to end his career on a high note. He still has a rocket launcher for a right hand and possesses the athleticism to compete in the lightweight division. Brandon Girtz isn’t an UFC-level name, but if Guillard comes in with his weight on point and delivers a noteworthy performance, Bellator may have just found itself a diamond in the rough. Guillard’s prospects moving forward are murky at best, but he can deliver a devastating knockout with ease and has no problem with a microphone in front of him. Sounds like a fighter right up Bellator President Scott Coker’s alley.