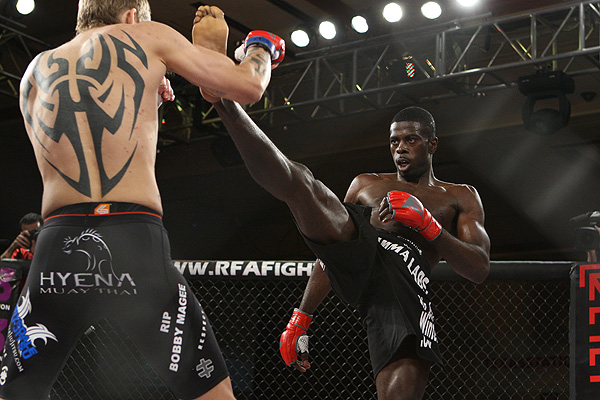 The Resurrection Fighting Alliance will crown a new welterweight champion at its 22nd event. The men vying for the crown are familiar names to many fight fans. One of those men is Gilbert “Jamal” Smith, a cast member on The Ultimate Fighter 17 and a veteran of the Titan FC, Legacy FC and RFA promotions. The other is Chidi Njokuani, brother of UFC veteran Anthony Njokuani and a mainstay of the RFA.

Smith’s RFA record includes just one appearance, a majority nod over Bojan Velickovic in November. After entering the TUF house with a 5-1 mark and a preliminary-fight submission victory over Eric Wahlin, Smith stumbled in the elimination round, where he fell via knockout to Luke Barnatt. Smith didn’t fare much better at the TUF 17 Finale, where he was submitted by Bubba McDaniel. He rebounded nicely on the regional circuit, however, with four wins in his next five bouts. His only loss in that span came against UFC vet Brian Foster. Smith’s success earned him a spot on the RFA roster, and his victory over Velickovic was enough to usher him into a championship tilt. Smith is a grinder — nearly half of his fights have ended on the scorecards — but he is a skilled finisher on the ground as well, having scored six of his victories by way of submission. While he has stumbled against the likes of McDaniel and Foster, he also holds notable victories over prospects Jason South and Ben Brewer.

The younger of the Njokuani brothers, Chidi is just as much of a formidable striker as his brother, but with more size packed on. The 26-year-old has finished eight fights by some form of knockout. He also has one submission stoppage. A fixture on the RFA roster, Chidi made his promotional debut at RFA 3 and has compiled a 3-1 (1 NC) mark with the promotion. He has suffered losses to UFC veterans Brandon Thatch and Jorge Lopez and Bellator vet Jeremy Kimball, but he has posted victories over such notables as UFC vet Alan Jouban and Legacy mainstay Jonathan Harris.

Despite the four losses on his record, Chidi looks like the more promising of the Njokuani brothers. He displayed solid takedown defense and reversal abilities in his fight against Steve Hanna, and he’s really learned how to use his size to his advantage while also scoring with his stand-up arsenal. The question now is whether he can take a skill set that worked so well against a 4-1 fighter like Hanna and apply it to a 10-3 UFC veteran like Smith.

Smith isn’t much of a power striker — he’s never even scored a knockout victory of any variety — but he also tends to avoid getting drilled on the feet. His biggest struggle here will be in overcoming Njokuani’s significant height edge. Njokuani stands at 6-foot-3, a full six inches taller than Smith’s listed height. Smith will give up approximately four and a half inches in reach as well. That’s going to make any toe-to-toe battles dangerous for Smith, whose lone knockout loss came in an exhibition affair against the extremely long Barnatt. Smith was also rocked by a head kick in the first round of his fight against Velickovic. Njokuani’s best weapons are his kicks and knees, which make him a significant threat to the more boxing-oriented Smith.

As impressive as Njokuani’s performance against Hanna may have been in terms of stifling the takedown and hitting reversals, it’s difficult to imagine him replicating it against the more seasoned and skilled Smith. Despite his strength, Smith sometimes struggles with the takedown, so Njokuani may succeed there. However, Njokuani will be outmatched if the fight does hit the mat. If it goes to the ground, Smith has a strong chance at emerging with the submission win.

However, it might never reach that point. Njokuani fights long and utilizes plenty of kicks and knees. That spells a recipe for disaster for Smith, who likes to stand and bang but relies heavily on moving forward and throwing punches that leave him open to counters. As Smith comes in or ties up for the clinch, Njokuani can catch him with knees to punish his body. And as Smith exits or stands at range, the head kick will be there for Njokuani. Unlike Velickovic, who couldn’t finish Smith when he had the UFC veteran in trouble, Njokuani will attack relentlessly if he smells blood. This one will end midway through the contest by way of a TKO finish for Njokuani.

Despite Invicta’s recent foray into the world of the women’s 155-pound division, it isn’t often we get to see female lightweights don the four-ounce gloves. This weekend, though, Jeremy Horn’s Elite Fight Night will provide one of those rare opportunities when it delivers a contest featuring Jessica Halverson, a top-15 female lightweight, against Charlene Donahue, a debuting pro.

The state of the women’s lightweight division becomes apparent when considering that Halverson checks in at No. 8 in the Combat Press Women’s MMA Rankings despite sporting just a 4-3 overall mark and a 2-3 record over her last five outings. The Team Illusion product has faltered against fellow ranked lightweight Jozette Cotton and Invicta veterans Tamikka Brents and Vanessa Mariscal. She defeated her other four opponents by TKO, but those foes now hold a combined 2-14 record.

At age 39, Donahue is getting a late start in the world of professional MMA. She makes her pro debut at Elite Fight Night 25 after overwhelming two amateur opponents. Her first amateur fight, which took place in September 2013, ended in a TKO stoppage in the first round. She returned in April 2014 with another TKO victory, this one coming at the end of the second round when her opponent failed to answer the bell for the third and final frame. “Charmute” fights out of Team Link Utah under the tutelage of Fabio Serrao.

Halverson’s experience and status as a top-15 lightweight certainly make her a favorite in this affair, but Donahue can’t be counted out. Against Buffy Ogden, Donahue pressed forward, landed on top when the fight went to the ground, transitioned to mount with ease and punished Ogden with ground-and-pound until the referee halted the contest. That’s the perfect game plan to pursue when taking on Halverson, a plodding brawler who tends to lower her hands during exchanges.

Donahue is far from a technical striker, but her speed will allow her to get the jump on Halverson. Halverson’s hands-down approach and Donahue’s own sloppy striking makes this a toss-up in the striking department. Donahue’s safest route to victory comes in taking the fight to the mat, where Halverson looked helpless against Brents. Halverson’s takedown defense is lacking, and the veteran fighter has trouble fighting off her back.

Donahue is fighting in her own backyard against an opponent who might be ranked but still has a lot to prove. Halverson could land the early TKO finish, but Donahue has the tools to drag this fight to the mat and dominate her more experienced opponent. This one might see a similar ending to Donahue’s win over Ogden and Halverson’s loss to Brents. Donahue will press forward, take down Halverson and find little resistance from her grounded opponent. From there, a barrage of ground-and-pound will follow as Donahue scores the upset and picks up a win in her debut.

Brazil has been a gold mine for new female prospects over the last couple of years. While most are now under contract with the UFC, Invicta FC or XFC International, there are still some up-and-comers out there on the Brazilian regional circuit. Two such competitors, strawweights Carolina Karasek and Bruna Vargas, are set to battle at the first edition of Team Nogueira Porto Alegre’s MMA Circuit.

Vargas fights out of Minu Fight Team and sports an unblemished record through two outings. She made her pro debut in October 2013 with a second-round guillotine choke submission of Thaiane Souza, who is now 0-2 as a pro. She returned to action in April 2014 with a unanimous decision victory over Rafaela Garcia, whose record now sits at 0-2. Therefore, her fight with Karasek marks the first time Vargas will meet an opponent who has a pro victory on her record.

Karasek made her pro debut the same month as Vargas and launched out of the gates to a perfect mark through three fights. Those fights all ended in first-round stoppages (two TKO finishes, one submission), and they came against a set of foes who now sport a combined 3-6 pro record. Karasek’s most recent fight, a May 2014 outing against Luana Souza, ended in disappointment when Karasek emerged on the wrong end of a split decision verdict.

Both fighters come from a Muay Thai background, but Vargas has displayed a more well-rounded game. She submitted her first pro opponent and attacked with submissions against her second foe. Vargas is taking a significant step up in the level of competition she’s facing, but she should still be able to find success. Her grappling arsenal will come in handy against Karasek and allow Vargas to keep her spotless record intact with another submission win.