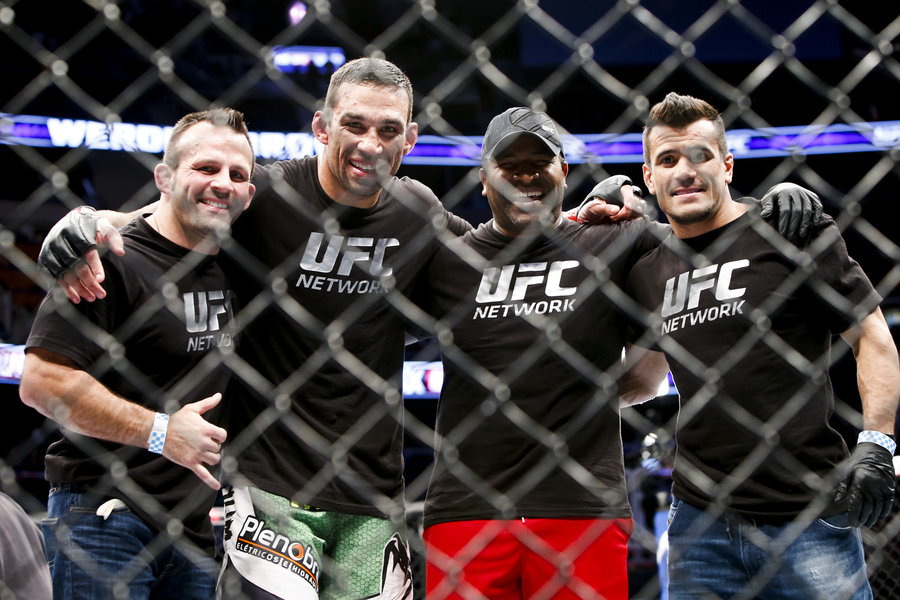 On Saturday, Nov. 15, the UFC hosted UFC 180: Werdum vs. Hunt from the Arena Ciudad de Mexico in Mexico City.

In the main event of the evening, the promotion crowned an interim heavyweight champion as Brazilian submission stalwart Fabricio Werdum locked horns with New Zealand knockout artist Mark Hunt. Werdum was originally slated to face UFC heavyweight kingpin Cain Velasquez, but a knee injury sidelined the champion. The 37-year-old Werdum had reeled off four straight wins since returning to the promotion in 2012. Hunt, meanwhile, was unbeaten in six of his last seven Octagon appearances. The 40-year-old Kiwi had stopped seven of his 10 career wins by knockout.

The co-main event featured The Ultimate Fighter 17 winner Kelvin Gastelum against the hard-hitting Jake Ellenberger. Gastelum carried an unblemished, 9-0 record into the bout. Ellenberger was looking to get back in the win column after dropping back-to-back fights to welterweight contenders Robbie Lawler and Rory MacDonald.

Brazilian Fabricio Werdum captured the UFC interim heavyweight title with a second-round stoppage of New Zealand’s Mark Hunt. Hunt delivered a massive right hand just seconds into the fight that dropped Werdum. Hunt let the grappling ace back to his feet, but surprisingly took Werdum to the canvas later in the round. Hunt was able to avoid danger inside Werdum’s guard and claim the round. Hunt again dropped Werdum with a right hand in round two and was looking for the finish. Werdum countered with a huge knee flush to the jaw of Hunt that sent him crashing to the mat. Werdum flurried with punches and referee Herb Dean intervened.

TUF 17 winner Kelvin Gastelum remained undefeated with a first-round submission of Jake Ellenberger. Ellenberger scored early with counter right hands, but Gastelum was able to take the fight to the ground. Ellenberger worked back to his feet, but he Gastelum maintained his forward pressure. Ellenberger looked for a takedown, but Gastelum scrambled to his back and slapped on a rear-naked choke to end the fight.

Former title challenger Ricardo Lamas snapped the seven-fight winning streak of Dennis Bermudez with a first-round submission win. Bermudez closed the distance early and looked for a takedown. Lamas kept the fight standing and knocked Bermudez to the mat with a push kick. Bermudez continued to march forward but ate a stiff jab from Lamas. Lamas smelled blood and locked on the guillotine to coerce the tap from Bermudez.

Augusto Montano made the most of the opportunity to fight in front of his hometown crowd, stopping Chris Heatherly late in the opening round. Heatherly scored with a takedown early, but he was unable to hold the promotional newcomer on the ground. Montano opened up on his feet and hurt Heatherly along the fence. Heatherly pulled guard, prompting an anaconda attempt from Montano, but Heatherly escaped. Montano continued to fire away on the feet, battering Heatherly with knees and forcing the referee to halt the bout.

Hector Urbina survived a rough opening minute to submit Edgar Garcia in the first round. Garcia took Urbina down and took his back right off the bat. Garcia flattened Urbina out and rained punches, but Urbina survived. Urbina briefly looked for an anaconda choke, but Garcia powered out. As Garcia looked for another takedown, Urbina latched onto his neck and forced a tap due to guillotine along the cage.

Yair Rodriguez claimed the featherweight crown of TUF: Latin America, edging Leonardo Morales on the scorecard. Rodriguez used his striking attack early, before getting Morales to the ground and threatening with a rear-naked choke and an armbar. Morales showed his resiliency to escape and return to the feet. Rodriguez repeatedly threatened with flashy strikes and submission attempts, preventing Morales from mounting offense. In the final stanza, Morales opened up on the feet, but it wasn’t enough, as the judges reward Rodriguez for his efforts.

Alejandro Perez used his striking and a two-point deduction to best his Team Velasquez teammate Jose Quinonez by unanimous decision and claim the TUF: Latin America bantamweight title. Perez peppered Quinonez in the opening round with leg kicks and a higher output. Quinonez looked to turn the final round, gaining top position and attacking with an arm-triangle choke. Perez defended, but an illegal headbutt from Quinonez prompted referee John McCarthy to deduct two points. Quinonez could not overcome the deduction, dropping the fight on the scorecards.

Bantamweight Jessica Eye got back in the win column with a second-round TKO over Leslie Smith. Eye used her speed advantage to pepper Smith on the feet in the early going. A big right hand connected with Smith’s cauliflower ear late in the round, causing blood to gush down the left side of Smith’s face. The pair continued to exchange in round two, but Eye again landed to the ear, prompting referee Herb Dean to call in the doctor. Smith’s ear dangled from her head, forcing a stoppage to the bout.

In the first televised fight of the night, Mexico’s Gabriel Benitez scored a third-round finish of Panama’s Humberto Brown. Benitez looked for a guillotine choke early and often in the first round, but Brown was able to survive the submission attempts and the round. Brown started round two strong, but committed his second groin strike of the fight and lost a point. Benitez came on strong late in the round with his striking. In round three, Benitez scored with a big knee and then locked on another guillotine, choking Brown unconscious.

Mexico’s Henry Briones survived a tough first round against Argentina’s Guido Cannetti, scoring a second-round submission win. Cannetti got the better of Briones on the feet in the opening stanza, hurting Briones along the fence. Briones showed his heart and came back with a vengeance in round two. Briones scored with an uppercut that wobbled Cannetti and slapped on the fight-finishing rear-naked choke.

In a battle of The Ultimate Fighter: Latin America castmates, Marco Beltran edged out Marlon Vera by decision. Beltran set a high pace in the opening round and was able to control Vera on the ground. Vera rebounded in round two, threatening Beltran with a rear-naked choke. Beltran turned the tide late in the round, mounting Vera and dropping ground and pound. The final frame was all Vera, but it wasn’t enough, as Beltran took the decision win.