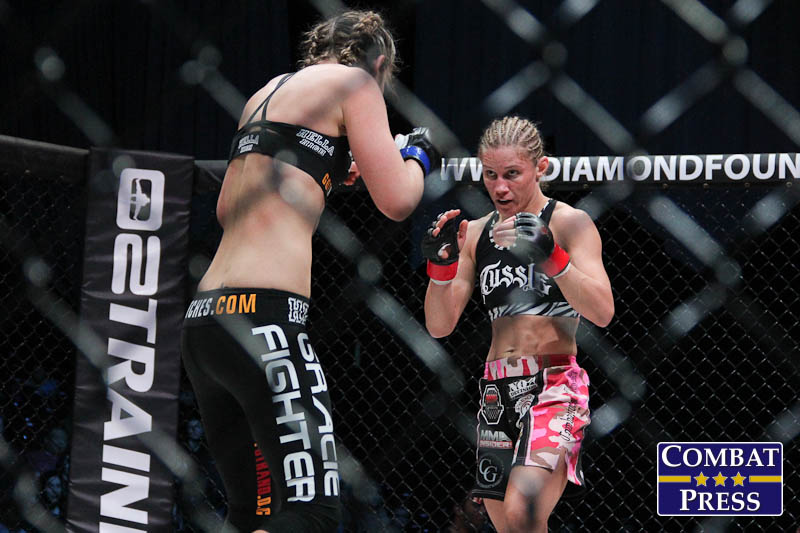 In the main event, Barb Honchak put her flyweight title on the line against Japanese veteran Takayo Hashi. In a grinding affair, Honchak used superior clinch and a mixture of strikes to score points. Hashi did not have an answer, as she was constantly outmuscled by the local favorite. It was a fight that was met with great enthusiasm by those in attendance, but was largely panned for its lack of action. Regardless, Honchak retained her belt via unanimous decision, keeping her in the running for the top pound-for-pound fighter in women’s MMA.

In what could have been a title eliminator fight, Karolina Kowalkiewicz and Mizuki Inoue put on a great show. Kowalkiewicz came out of the gate aggressive, throwing a high volume of strikes with precision. Inoue came back in the second round, scoring a big takedown and controlling the Pole on the ground. However, in the third, Kowalkiewicz got back to what made her successful earlier on, overwhelming Inoue with a high work rate. The win likely sets up Kowalkiewicz as the next challenger for Katja Kankaanpaa’s strawweight belt.

Kaitlin Young and Raquel Pa’aluhi put on a Fight of the Night contender in the featherweight division. Pa’aluhi, who took this bout on just a week’s notice, shook off a slow start to an aggressive Young to come back strong. After Young slowed in the second, Pa’aluhi opened up on the feet and dominated Young on the mat. She took a convincing decision, showing that she is a tough out for anybody who steps across the cage from her.

In what was expected to be a barnburner, Jodie Esquibel and Nicdali Rivera-Calanoc did not disappoint with their performances. Rivera-Calanoc was tough and gritty, but Esquibel was just clearly the better, crisper, more technical striker. She used superior quickness and movement to move in and out on Rivera-Calanoc, mixing up kicks and punches to the head and body. The win put her in a great position at 105 pounds, though it will be tough to march toward the title with teammate Michelle Waterson holding the belt.

A competitive, back-and-forth affair occurred in the atomweight division, as Amber Brown and Liz McCarthy put on a show. McCarthy looked good early, hunting Brown down and putting her on her back. However, Brown stifled any attack on the ground that McCarthy presented and was better on the feet. She even opened a giant cut above McCarthy’s eye. Based on damage and effectiveness, Brown was awarded a split decision in a bout that could have gone either way.

Amanda Bell continued her rise to prominence in the featherweight division with a dominant TKO victory over Maria Hougaard-Djursaa. From the opening bell, Bell moved forward aggressively and threw heavy hands at the Danish fighter. She eventually put Hougaard-Djursaa on her back and dropped a high volume of ground-and-pound. With seconds remaining, the referee had seen enough, declaring Bell the winner.

Andrea Lee and Shannon Sinn made their respective Invicta debuts against one another in the flyweight division and it was an entertaining one. Andrea Lee used superior striking, mixing in body shots and power punches to the head. She dropped Sinn in the first round, but failed to finish her. She used the next couple rounds to completely overwhelm Sinn, running a clear-cut unanimous decision. With that performance, Lee is definitely an entertaining performer and could be the next big thing at 125.

In the opening bout of the night, Kelly McGill took a hard-fought unanimous decision victory over pro debutant Maegan Goodwin. McGill used more effective striking and superior grappling positions throughout an action-packed fight. Both women landed some huge shots throughout the fight, but it just appeared that McGill was landing more cleanly. The win puts McGill at 2-0 as a pro.