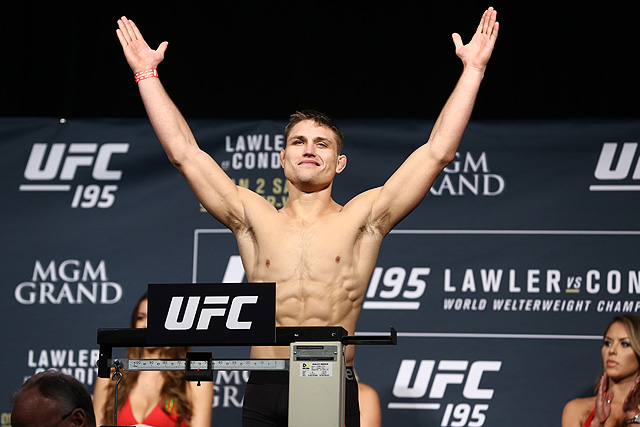 UFC on Fox 19’s Drew Dober: What’s Up With the Elevation?

In Drew Dober’s hometown of Omaha, Neb., the elevation is approximately 1,090 feet above sea level. While it’s in the Midwest, which most people associate with lower altitudes, Omaha is one of the highest cities in the country’s bread basket, sitting above other relative cities like Chicago, Minneapolis, St. Louis and Kansas City.

Dober grew up in Omaha, attended local schools, started training in Muay Thai at 14 years of age, and began his professional MMA career at age 20. In a little over four years as a pro, he racked up a 14-4 record, and, despite a previously unsuccessful run at The Ultimate Fighter 15, earned himself a spot in the big show.

The Nebraskan’s UFC debut came at welterweight against Sean Spencer at the TUF 18 Finale in November 2013. Dober, who traditionally fights at lightweight, lost by unanimous decision. In the months following the fight, he received an offer to train with the newly formed Elevation Fight Team in Denver, so he rose about 4,200 feet in elevation to check it out.

The Elevation Fight Team, home to several UFC stars, has become one of the most formidable teams in the sport. Most of their training takes place at MusclePharm’s headquarters under the tutelage of Leister Bowling, Eliot Marshall, Christian Allen and Loren Landow. Needless to say, it was a big step up in training for Dober, who was fairly limited with his team in Omaha.

Dober’s UFC career started out pretty low-key, but it has turned out to be one full of twists and turns. The first one happened immediately after his next fight, which took place in Germany against German fighter Nick Hein at UFC Fight Night 41. Hein, who currently trains out of the Tiger Muay Thai camp in Thailand, won the bout by unanimous decision, but what happened next was even more life-changing for Dober.

“I met my wife, because I fought her brother in Berlin,” Dober told Combat Press. “We met at the post-fight party. I fought Nick Hein, and he was super stoked that he won, and [he] invited me to his post-fight party. I thought to myself, ‘Why not party with the Germans in Germany?’ And once I was there, I met his sister, and we were pretty much interested in each other right off the bat, and one thing led to another. I can tell my people that I met my wife after fighting her brother.”

The story has been told before, but, basically, Gloria Hein and her new beau stayed in contact for a couple months, eventually met in New York for five days and then she came out to Denver, which also went very well. Then came the big test.

“I thought the last straw would be if she would truly hate me after a training camp,” Dober said. “So, she stayed with me during the entire camp for Jamie Varner, and she survived that and we’re still in love.”

Not only was that the mile-high test for their relationship, but the camp was Dober’s first full run with the Elevation Fight Team. It garnered his first UFC win over a well-known vet and former WEC lightweight champ by first-round stoppage.

The Varner fight is definitely one of the highlights of Dober’s career, but it turned out the guillotine choke would be some kind of a bad-luck charm for his next two fights.

In March 2015, Dober fought Leandro Silva in Brazil. In the middle of the second round, Dober was in a guillotine choke when the referee stopped the fight by technical submission, even though Dober wasn’t even in trouble.

Then, in June, he faced former TUF winner Efrain Escudero, which yielded another very strange ending. About 30 seconds into the fight, both men threw kicks on the same side at the same time. Escudero’s kick caused Dober to slip and fall, and as they were standing up, Dober’s head fell right into a standing guillotine, which eventually caused a tap.

After a year filled with thinner air, guillotine kryptonite and an international marriage, Dober’s life seems to be back on track in 2016. On Jan. 2, he got back in the win column with a decision nod over Scott Holtzman at UFC 195, which led to a renewed contract. Coinciding with his fresh run with the promotion, he and his wife are planning their formal wedding, which will take place near his hometown over Memorial Day weekend. Gloria was also working on paperwork for her residency in the United States.

“It was a very big decision for her,” Dober explained. “She was a right-hand woman for a big apartment complex, and things happened to where she had to either look for a new job, and it got confusing. I took that opportunity to say, ‘Hey, since you are in an absence from your job, why don’t you just come to Denver and see how this is going to work.’ Now that she is doing a permanent residency move, she is sacrificing a lot in Germany to come live with me.

“I was trying to get a fight in before me and my wife have our actual wedding ceremony. Last year, we went to Las Vegas and got hitched, but it was very goofy. This year, our actual ceremony is May 27, so I requested fights before May, and I was offered April 16, so I took it.”

Dober’s next outing takes place at UFC on Fox 19. He faces Dagestani fighter Islam Makhachev. Makhachev was on an 11-fight winning streak in Russia before joining the UFC, where he is now 1-1. He trains out of American Kickboxing Academy alongside fellow Dagestani lightweight Khabib Nurmagomedov. Makhachev holds an International Master of Sport in sambo.

“I think it’s a great match-up for me,” said Dober. “From what I’ve seen, he hasn’t fought much outside of Russia, so the step up in competition will be new for him. It’s going to be a great match-up. He moves forward [and] swings big, and I think I can take advantage of his mistakes. I think this might be a really good fight for me.”

Dober has a lot in his plate as he moves into the second quarter of 2016. After a full UFC training camp, he will fight this weekend and get married six weeks later. If there’s one thing that fans can bank on, it’s that there will never be a dull moment in the career of this 27-year-old Nebraska native turned resident of the Mile High City. It begs the question: what’s up with the elevation?

“My first two UFC fights, you could really see the training I was getting before Team Elevation. It got me to the UFC, but it wasn’t able to support me in the UFC — my first fight in the UFC was very lackluster,” said Dober. “But once I made the move to Elevation, I was progressing in the fight with Nick [Hein], but I wasn’t with the team long enough. Since my last couple fights, I feel this huge difference in my game. I feel more confident, seasoned and better trained.

“All my fights are entertaining. Within the UFC now, it’s not only the actual fights, but the things surrounding the fights that make it fun.”

Dober would like to thank his coaches and training partners at Elevation Fight Team, Muay Thai of Colorado, Easton Training Center and MusclePharm. Follow Drew on Twitter: @DrewDober
Advertisement