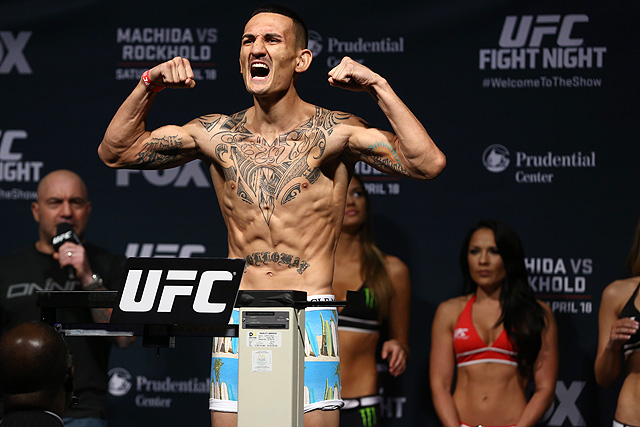 Max Holloway’s Reign is Far From Over

The “Blessed Express” rolls on. UFC featherweight champion Max Holloway added another legend to his resume at UFC 240 with a five-round clinic against former lightweight champion Frankie Edgar. So, what’s next for the native of Waianae, Hawaii?

The winning streak extends to 14 fights for Holloway at featherweight, where the Hawaiian has looked invincible at times. This fight was no different. Holloway was not fazed by Edgar’s offense. Aside from some solid leg kicks, Edgar could get nothing going. The credit has to go to Holloway. Edgar ate some of the cleanest uppercuts, overhands and jabs he’s eaten in his career. He was left looking like he was not anywhere near Holloway’s level at times. For Holloway to do this to a fighter the caliber of Edgar — a man who’s shared the Octagon with José Aldo, Urijah Faber and Chad Mendes — is pretty damn great.

Holloway also nullified Edgar’s arsenal of takedowns, only hitting the mat once in 15 attempts.

After his third title defense, Holloway is still four away from tying Aldo’s tally of eight. With 17 wins in the featherweight division, he has beaten just about everyone, or at least everyone worthy of a title shot.. It’s not likely he’ll break Aldo’s defense streak.

There is one contender left that does deserve a crack at the champ, though. Alexander Volkanovski is on a 17-fight unbeaten run, and he just turned back two of the best fighters in the featherweight division’s history. Hell, if you can make Aldo look confused and retire Mendes, then you’re probably a good challenge for anyone.

Holloway is always game to fight anyone, even heavyweights. A jump back up to lightweight is not out of the question. There is an upcoming bout between two of the more exciting fighters in that division, in the same province where Holloway just fought. Justin Gaethje and Donald Cerrone are ranked fourth and fifth at 155 pounds. It would be a good way to get Holloway back in the mix at lightweight.

Regardless of where he goes next, Holloway is bound to keep rolling.