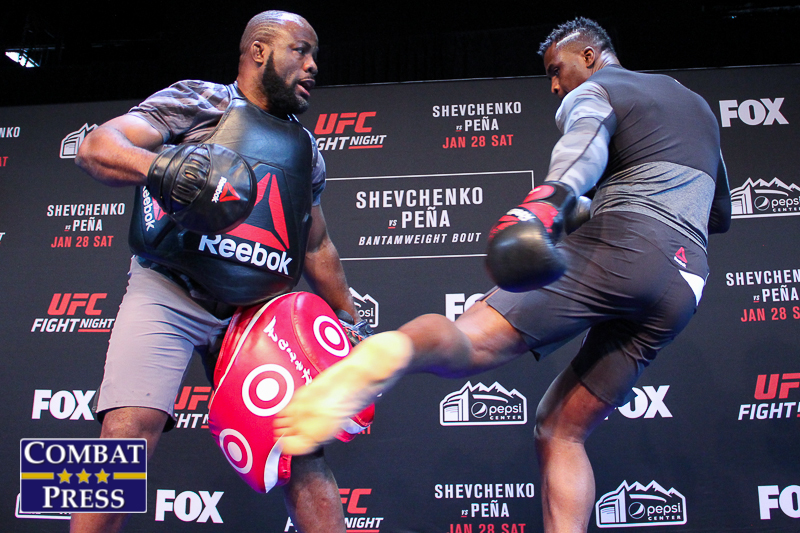 Will Francis Ngannou Be Able to Deal with His Distractions at UFC 270?

Francis Ngannou takes on Ciryl Gane for the UFC heavyweight championship in the main event of UFC 270 this weekend. This fight is arguably the most anticipated heavyweight title contest in recent years.

Ngannou heads into this bout with a myriad of potential distractions that could have a negative impact on his performance. How will he deal with this at UFC 270?

There have been two stories that have dominated the build-up to this fight that both revolve around Ngannou. The first is the fact that he will be facing a former sparring partner and teammate in Gane and former coach Fernand Lopez.

Ngannou started his MMA career training out of the MMA Factory in Paris, France. He destroyed everyone in his path until he met Stipe Miocic in his first UFC title fight in Jan. 2018. Ngannou was dominated for five rounds and lost by a wide margin on the judges’ scorecards. Following this, the relationship between Ngannou and Lopez became strained.

Shortly afterwards, Ngannou left the MMA Factory permanently and moved to the Xtreme Couture gym in Las Vegas. Lopez later claimed in interviews that Ngannou deviated from the gameplan against Miocic, which resulted in him being dominated. In the following years, Lopez has made disparaging comments towards Ngannou, questioning his attitude and work ethic. The 35-year-old has responded by claiming that Lopez wants to be in the spotlight.

The bad feelings have festered, but during this fight week Lopez has called for a truce, saying that he longer wants to get into a back-and-forth with his former fighter. Gane meanwhile has been a bystander and has repeatedly said that there are no issues between himself and Ngannou.

There is a theory within the MMA community that Lopez’s continued verbal assaults on Ngannou have been a calculated move to force the champion to fight in an emotional manner against Gane. Controlling his emotions is going to be crucial for Ngannou in a fight against a man who is widely considered to be the best technical striker in the history of the heavyweight division. If he fails to do so, then he could be dominated like he was in the first Miocic fight. Against a man who is as technically skilled as Gane, over-extending and tiring himself out could be his downfall.

Ngannou will need to separate the issues he had with Lopez from the fight in order to avoid falling into a possible trap that has been set by Gane’s camp. If Ngannou is fatigued early, then Gane will likely pick the champion apart from a distance and secure an easy victory. Lopez seems to believe that Ngannou could lose his composure and stray from his gameplan. This was something that both Gane and Lopez have claimed that Ngannou was guilty of during his time at the MMA Factory. However, the 35-year-old delivered a calculated performance to knock out the aforementioned Miocic in the rematch and win the UFC title. This is a testament to his maturity and development as a fighter.

Ngannou’s previous connection with Gane and Lopez has been a major topic of discussion in the build-up to the fight but the biggest story is Ngannou’s contract status with the UFC. This Saturday’s bout is the last fight on Ngannou’s current UFC contract. Ngannou and his management have been embroiled in a public contract dispute with the UFC. Ngannou believes that he is underpaid. These failed contract negotiations seemed to be the reason why the fight that Ngannou was set to have against Derrick Lewis did not take place.

Instead, the UFC made an interim title fight between Lewis and Gane at UFC 265 in Aug. 2021, just five months after Ngannou captured UFC gold. Ngannou and his manager Marquel Martin were incensed by this decision and voiced their displeasure on social media. Gane would proceed to win a one-sided contest by TKO in the third round to set up the title unification that will take place this weekend.

Ngannou has also spoken of a desire to fulfil a childhood dream by entering into the realm of boxing. Recently, the 35-year-old has spoken to WBC heavyweight champion Tyson Fury on social media over a possible boxing bout. This suggests that Ngannou is looking for the lofty paydays that elite level boxers regularly attain, but is something that has eluded most MMA fighters.

Ngannou’s desire to improve his financial standing is understandable, but there is a danger that he is looking past Gane. Regardless of whether he stays in the UFC or not, his value would be significantly diminished with a loss this Saturday. The intrigue behind a possible boxing match with Fury or any of the other elite heavyweight boxers would stem from the way Ngannou has destroyed opponents in recent years. The appeal of those potential fights will not be the same if the Cameroonian loses this Saturday, and particularly if he is stopped.

If Ngannou intends on re-signing with the UFC then heading into negotiations as the champion would give him leverage. This would likely enhance his chances of receiving the financial offer that he is looking for. Ngannou will need to put his frustration with the UFC and president Dana White to one side when he steps foot in the Octagon on Saturday night. Considering the number of incredible knockouts Ngannou has already delivered, he will still be a major attraction even if he loses. If he parts ways with the UFC, there will undoubtedly be several promotions around the world ready to pay big money to secure his signature. However, a big part of Ngannou’s brand is his reputation as the hardest puncher in the history of the sport. If Gane not only takes Ngannou’s shots, but goes on to win, then the Cameroonian’s future earning ability may take a significant blow.

These factors make the stakes incredibly high for Ngannou on Saturday night. For a man who has overcome incredible adversity in his career to reach the pinnacle of combat sports, emerging victorious on Saturday night could be a similarly significant triumph.