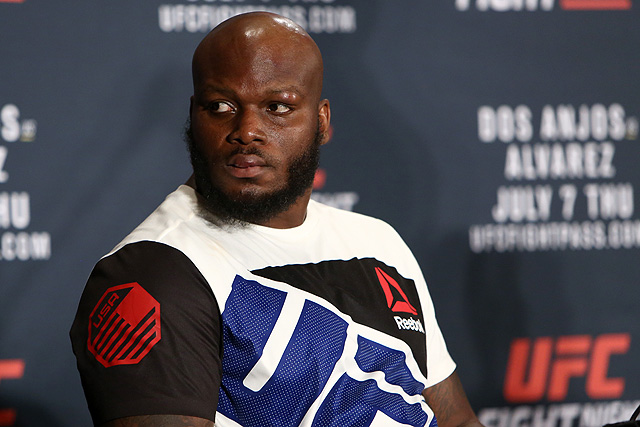 Will Derrick Lewis Continue to Be Underestimated at UFC 265?

Derrick Lewis takes on Ciryl Gane for the interim UFC heavyweight title at UFC 265 this weekend. The fight takes place from Lewis’s hometown of Houston.

The scheduling of this match-up came as a surprise to many. Reigning champion Francis Ngannou fought in March. The relationship between Ngannou’s management and the UFC has seemingly deteriorated in recent months. As a result, the UFC decided to book an interim title bout between the second-ranked Lewis and third-ranked Gane.

In spite of the success that he has enjoyed in his career, Lewis has been underestimated on many occasions. This trend continues ahead of UFC 265. He is an underdog in this bout as many fans and analysts believe that Gane’s technical skill will prove to be too much for the Houston native. Lewis will be undeterred by this, as he has had many great moments in his career through defying the odds.

In February he was a +300 underdog in his main event bout with Curtis Blaydes. His output was almost nonexistent in the first round. He was hesitant and allowed Blaydes to back him up against the cage and take control of the contest. In the second round, the 36-year-old knocked Blaydes out with an uppercut, just when he level changed to attempt a takedown. It looked like an obvious move against a man renowned for his wrestling, but it was further evidence of Lewis being a far more cerebral fighter than what he is given credit for.

Lewis possesses punching power that is arguably unmatched in the history of MMA. But there are other factors in his success that are often ignored. His awareness of his own strengths and weaknesses has been crucial in many of his victories. The 36-year-old knows that he has a limited gas tank and paces himself accordingly. A usual fight of his involves him backing up against the cage and throwing very little offense. He will occasionally deliver big right hand counters and make explosions off the back foot with jumping kicks.

The velocity with which Lewis explodes often catches his opponents by surprise. His athleticism belies his large frame. Due to the immense power that he carries in his hands, almost all of his opponents attempt to take him down. Lewis has shown an uncanny ability to get up after being pinned to the ground by his opponent. While many attribute this to his brute strength rather than the correct technique, he is adept at avoiding being submitted after being taken down. His escape from the bottom against Brazilian Jiu-Jitsu black belt Marcin Tybura was an example of this.

Lewis also manages to cover up well when receiving strikes. This allows him to take the sting out of the big punches coming his way and limits damage. It also mitigates his slow starts and keeps him in fights. He most notably demonstrated this against Alexander Volkov at UFC 229. After being out-struck for almost the entire 15 minutes, Lewis knocked the Russian out with a big right hand with just 11 seconds remaining. It was one of the greatest comeback victories in the recent history of the UFC.

His knockout of Volkov earned him a title shot, but it took place in less-than-ideal circumstances. He fought just a month later at UFC 230 against Daniel Cormier. Taking on one of the most decorated fighters in MMA history so soon after putting in a grueling effort was ultimately too much to overcome for the Houston native. In what was a one-sided contest, he was taken down and submitted in the second round.

The 36-year-old has since had knee surgery and also had long-standing back issues fixed. Lewis is now on a four-fight winning streak. He has a formidable opponent who stands between him and a second chance at gold.

Gane is arguably the most well-rounded fighter at the top of the heavyweight division. He is a technical striker, with strong physical attributes and a solid ground game. The Frenchman is undefeated and has been a complex puzzle for opponents to solve. Lewis is confident of landing the big shot to secure the knockout. However, Gane will be arguably the most elusive and technically proficient fighter Lewis has encountered in his entire career.

Gane’s speed is what separates him from some of Lewis’s past opponents. Gane is not likely to present Lewis with opportunities to land big punches from close range. As Jairzinho Rozenstruik found out, Gane is an excellent frontrunner and is capable of adhering to a game plan for 25 minutes. Gane will look to replicate his strategy from that fight, when he neutralized and frustrated a power puncher. Gane utilized his reach, distance management and diversity of strikes to cruise to victory.

For these reasons, Lewis may not get the chance to deliver another comeback victory. Although it is not in his nature, he will need to have a quick start. He will have to pressure Gane before the 31-year-old finds his rhythm and gets a read on his opponent.

Lewis has cultivated an image of being a great entertainer rather than a great fighter. This has led to him being repeatedly overlooked ahead of his bouts. While his power is acknowledged by those within the MMA world, his fight I.Q. and technical ability are often disregarded. This can be partly explained by the persona that Lewis conveys in the media. He regularly downplays his ability in post-fight press conferences and also bemoans his physical condition.

This seems to lull many of his opponents into a false sense of security and adds to the narrative of him being a fighter with a rudimentary skillset. His humorous comments in interviews and jovial nature appear to overshadow his capacity to fight. This has contributed to the sentiment that Lewis just happens to keep finding a way to win fights in spite of his technical deficiencies.

This perception has often become reality. The man who possesses the most knockouts in UFC heavyweight history is rarely given the credit he deserves. Lewis is on the cusp of making history. He is just one knockout away from outright having the most knockouts in UFC history. His success and longevity at the highest level is a testament to not only his punching power and physical attributes, but his resilience and adaptability.

A victory over Gane this Saturday would secure UFC gold and be the biggest upset delivered by Lewis to date. A knockout of the undefeated Frenchman would leave many fans questioning how Lewis has managed to get it done again. By now it is clear that there are set-ups to the way “The Black Beast” knocks opponents out in the Octagon. Lewis would likely prefer to keep his tricks under his sleeve and preserve his ‘underdog’ status once more.