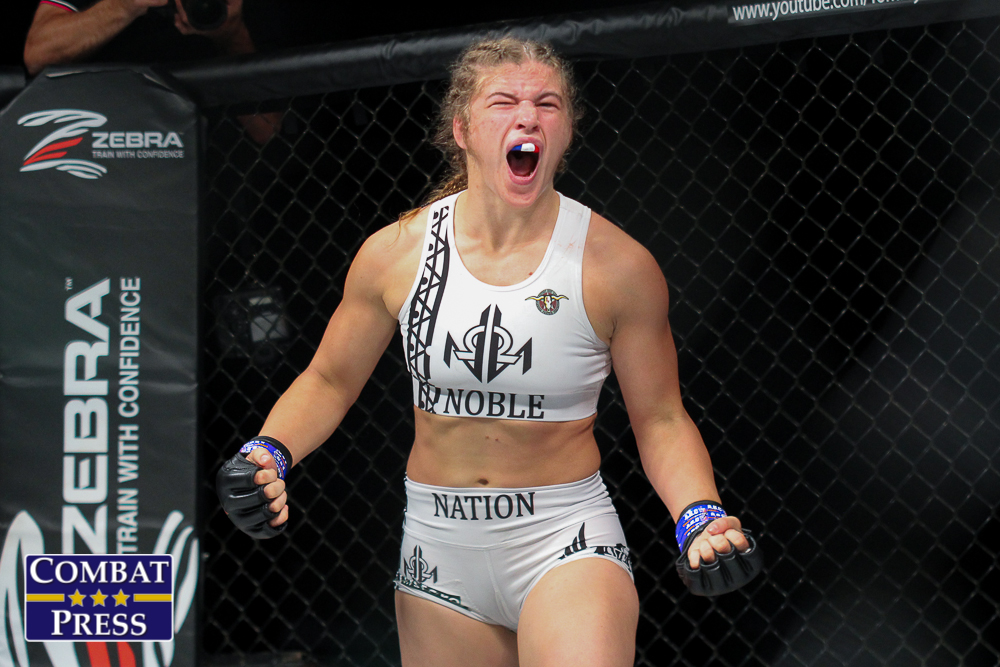 Another weekend has passed, and some really good fights took place. At Legacy Fighting Alliance 103, Vanessa Demopoulos made a statement with a quick win over Cynthia Arceo. Meanwhile, UFC 260 gave us an exciting three-round affair between Miranda Maverick and Gillian Robertson. Let’s take a look at these two bouts.

When I’m wrong, I’ll admit it. I was wrong here. I expected Demopoulos to need to get this fight to the ground in order to win. Instead, she didn’t even attempt to take it to the ground and instead won via first-round TKO. There isn’t much that can be said about a 37-second fight, but there are a few things we can discuss.

Just a few seconds in, Demopoulos caught Arceo during an exchange and hurt her. Arceo started backing up, which was fine, but she wasn’t really able to defend herself. Demopoulos caught her again, and Arceo went down.

This is where it got interesting. Demopoulos caught Arceo with a knee and landed a couple more punches before the ref opted to step in. It looked like an illegal knee, though. It appeared that Arceo was down. It was not an intentional illegal knee. It seemed as if Demopoulos was looking only at Arceo’s head, trying to time it, and threw it. Arceo might not have actually been down when the knee started in motion.

Again, it definitely was not intentional, and the knee is not what caused the end. Arceo was going down and was not going to recover. Demopoulos deserves all the credit for the finish. She went in and quickly won. Furthermore, she did so in the area where I felt she would have the most trouble — on the feet.

What’s next for Demopoulos? I would love to see a rematch with Loveth Young. Both ladies are coming off dominant wins with brutal finishes — Young stopped Kelly D’Angelo. They fought in January 2020, and Demopoulos got the decision in a fight I actually scored for Young. Let’s have them run it back. It would be a fun one.

This fight went as I expected. I said beforehand that Maverick would be dangerous on the feet and Robertson’s edge would come on the ground. We saw both scenarios in action, but ultimately it was Maverick who took the unanimous decision.

Round one was great for Maverick. She came out throwing quick, hard, accurate shots. Robertson knew she had to exchange or get beat up, so she tried to engage. This is where she ran into trouble, as there was no variety in what she threw. So, even when Maverick was throwing, she was probably wise to what was going to come back from Robertson and could avoid those or at least brace for them.

Robertson also moves back when she’s getting hit. She does so drastically sometimes. This puts her at a bigger disadvantage against an aggressive strike. They can now rush forward, because there won’t be much on what she throws as she’s moving backwards. Also, it gives a bad impression to the judges. It looks like Robertson’s hurt more than she probably is.

In the second frame, we saw Robertson at her best. This is even more impressive considering how bad round one went. A lot of fighters might lose confidence, but she clearly didn’t. She got the fight to the ground and out-grappled Maverick.

What I really liked out of Robertson was her patience. Whenever it appeared that Maverick was going to escape, Robertson found a new position. She didn’t try to desperately cling to the one dominant position. Instead, she went with Maverick and therefore was able to ride her back to an advantageous position. Often you will see someone fight to keep one position, which in reality makes the escape easier.

Now, you could also say she was too patient and unable to get the submission. However, she didn’t get the submission because Maverick did just enough to fight them off. Patience doesn’t mean relaxing. It means not forcing anything — nothing good comes from forcing. This round showed why while Robertson isn’t quite “there” yet, she is going to be “there” eventually.

We went into the third round with each fighter having claimed a round, or so we thought (more on that in a minute). Maverick saved the best for last and had the best round of the fight. She came out throwing and was not going to give Robertson time to even look for a takedown.

Want to stop a grappler from shooting? Make them move backwards. That is what Maverick did in the final frame. She mixed up her strikes well and gave Robertson no time to breathe. It was really impressive to see her not get tired and actually seem to gain energy. Once again, when Robertson tried to respond, but it was really just with the same punches.

When the Houston Astros got caught cheating, what they were doing allowed them to know what pitches were coming. When you are a batter and know what the pitch is going to be, you are ready for that pitch. There’s no guessing involved. This was the MMA version of that situation — minus any cheating, of course. Maverick was able to know what punches were coming back at her, so she was ready, whether that meant blocking, avoiding or bracing for them. It was a huge third round for Maverick that sealed the decision.

I didn’t like that two of the judges actually gave Maverick the second round. This is absolutely ridiculous, and you won’t change my mind on it. It is a problem grapplers face. For four and a half minutes, Robertson controlled Maverick. She held great positions, looked for submissions, and dominated the round. Then, in the last 20 seconds, Maverick landed some punches. These were hard, accurate, damaging shots, but they were not fight-ending punches or anything.

Some judges continue to ignore what is happening when a grappler is doing good work. Since it isn’t visually violent, it is ignored. I’ve experienced this myself. Robertson used great control and kept Maverick where she wanted her, transitioned nicely, had a counter for every escape attempt, and in fact, was closer to a finish in the round than Maverick was. How does she not win the frame? How does her four and a half minutes of domination lose the round to Maverick’s 20 seconds of striking superiority?

Now, don’t get me wrong: Maverick won the fight. Maverick deserved to win. She fought very well and was the better fighter on that night. Yet, what if Robertson had turned in the big third round? What if she took the third and should have then gotten the decision, but instead lost because the judges were more impressed by 20 seconds than they were by four and a half minutes? This is not acceptable.

What’s next for Maverick? Maybe JJ Aldrich? Aldrich is coming off a win a couple weeks ago, so that is a fight that could make some sense.

That’s it for this week. Thanks for reading!