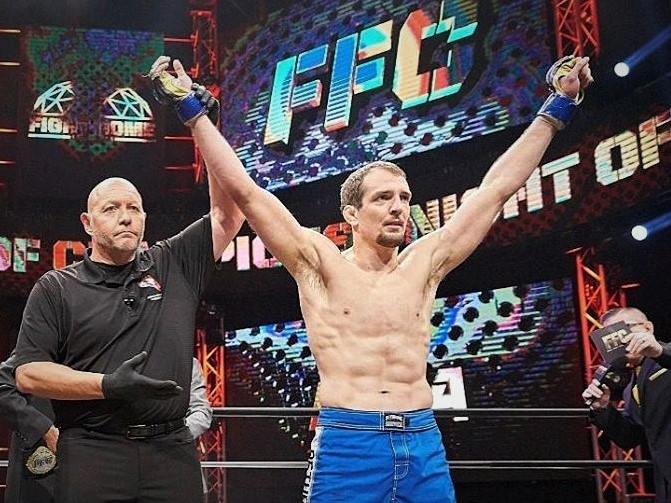 Final Fighting Championship returns for its 40th show, which features a kickboxing bout and a boxing match scattered in between a lineup of MMA contests. The headlining affair pits FFC welterweight champion Ben Egli against talented challenger Mark Lemminger.

The 31-year-old Egli posted a strong 9-2 mark on the amateur circuit, where he resided from 2008 to 2011. Both of his ammy losses came to John Bartlett, who has only managed a 2-1 record at the professional level. In 2013, Egli went pro and reeled off six straight victories. His first setback came in a 2016 contest with Titan Fighting Championship, where Egli dropped a decision to E.J. Brooks. “Brutal” recovered with a welterweight title run that included four more victories, all under the King of the Cage banner. He stumbled again in a 2018 showdown with Umar Yankovskiy, who outworked Egli for a unanimous-decision win. The Gracie Technics fighter rebounded with a victory over Roberto Neves to claim the FFC belt and then defended his crown against Joey Holt.

Lemminger, 26, went undefeated over the course of his five-fight amateur career. Along the way, he notched victories over future Legacy Fighting Alliance roster members Alton Cunningham and Tim Hiley. The Chosen Few Gym export made his pro debut in 2015 and rattled off seven victories before suffering his first taste and only taste of defeat against Jason Witt. Lemminger quickly returned to his winning ways with a decision nod over Rocky Edwards and a submission finish of Isaac Steele in his LFA debut.

Lemminger has the more balanced stat sheet, with four submissions and three knockouts. Egli, meanwhile, tends to attack when the fight hits the mat. The jiu-jitsu specialist has registered an impressive 10 tapouts and just two knockouts. If Egli is able to get the fight to the canvas, his chances for a victory are sure to increase.

Egli appears to be at home in the FFC, where he’s now 2-0 with two submissions. He can look awkward on the feet, but he has sneaky power and throw in some effective leg kicks. He’s no wrestler, though, so don’t expect many traditional wrestling takedowns. Instead, he’ll either pounce after a knockdown or look to drag an opponent down while in the clinch. If he is successful, then his opponent is in big trouble. Egli is relentless on the mat. He’ll cinch up a choke if given even the slightest opening.

Lemminger is in for a tough fight here. He’ll want to avoid throwing leg kicks, as his kicks do have a tendency to get caught and turned into a takedown. While his weakness is predominantly in takedown defense against wrestlers, the ease at which he can be taken to the ground is troubling. Egli has a solid chin that should stand up to Lemminger’s striking attack, and the grappler can get takedowns as long as he doesn’t get desperate and shoot from too far out. If Egli can close the distance and initiate the clinch, he’ll bring this fight into his world and add yet another submission to his resume.

Yes, the main event for the 75th edition of Legacy Fighting Alliance is a great fight. However, our attention falls to one of the other featured fights. Featherweight Jon Neal is set to fight in front of a supportive crowd in his home state of Utah. Neal, who has just one loss through 11 pro outings, will meet Andrew Cruz.

The 31-year-old Neal has been toiling around the regional scene since 2008 while slowly building his resume. He’s dealt with injuries that have prevented him from staying more active and climbing into the bigger shows. However, this will be his second LFA appearance. After competing for Total Mayhem and Jeremy Horn’s Elite Fight Night early in his career, the Utah resident became a mainstay of the SteelFist Fight Night organization. By his sixth fight, Neal had picked up the organization’s lightweight belt. After two successful defenses of the title, the One Hit MMA product moved down to featherweight and grabbed that SFN strap as well. He defended the featherweight crown with a submission of Skyler Frazier. This was enough to garner the attention of the LFA, which booked him opposite Tyler Diamond. Diamond ended up scoring the decision win, though. Neal has six grappling submissions, one striking submission and two technical knockouts on his record.

“Hurricane” Cruz has never risen above the ranks of the mediocre. He went 6-5 as an amateur, and he’s posted a middling 6-3 mark as a pro. The 28-year-old made his debut in 2015 with a submission win over the aforementioned Skyler Frazier. He added another three tapouts before finally running into some serious struggles. First, he was knocked out by Vince Morales. Next, he dropped a split verdict to Vince Fricilone. Finally, he was submitted by Fabio Serrao to extend his skid to three losses in a row. The Idaho-based fighter righted the ship with back-to-back victories over veterans Nathan Stolen and Drew Brokenshire.

Cruz is a mild submission threat to Neal, but the Utah resident is a skilled grappler in his own right. Neal has already encountered some solid veteran opponents, including Jordan Clements and Scott Casey. Neal was able to emerge from these fights with submission victories.

Cruz’s amateur record includes several submission losses. While it seems as though he’s improved his defensive grappling, the Bellator veteran has been handed a number of opponents who aren’t great at avoiding submissions either. Neal doesn’t fall into this same category, and he should make easy work out of Cruz. The end will come by way of a submission, naturally.

South Korea’s Road Fighting Championship has a knack for combining interesting and competitive fights with the somewhat outrageous. In 2016, the organization brought in Bob Sapp and Aorigele for a featured bout on a show that also included a far more relevant featherweight affair between Soo Chul Kim and Tuerxun Jumabieke. At its upcoming 55th show, the promotion is at it again. The bill features an openweight clash between Chris Barnett and Gun Oh Shim, but the headliner goes to a very competitive featherweight championship bout between titleholder Jung Young Lee and challenger Hae Jin Park.

The 23-year-old Lee came up through Road FC’s amateur pipeline with three victories before his pro turn in 2014. “The Korean Tiger” kicked off his pro run with a trio of victories against overmatched opponents. Once he finally did take a step up in competition, he suffered a decision loss to Se Young Kim. The setback was only temporary, though, as he returned to action just over four months later with his most impressive win to date, a doctor’s stoppage of 31-fight veteran Marcio Cesar. Lee then avenged his prior defeat with a first-round knockout of Kim. This led to a title fight between Lee and Mu Gyeom Choi. Lee won the title with a unanimous nod over Choi.

Park followed in Lee’s footsteps, scoring one ammy win under the Road FC banner before joining the promotion’s pro ranks. The 26-year-old debuted in 2015 and has been winning ever since. Park only feasted on one overmatched foe before jumping into deeper waters. His sophomore outing came against Young Seung Cho, who was undefeated through five fights before running into Park. The Ssen Gym export moved on to fight a series of opponents who all had winning records and at least seven fights under their belt. His most notable victories came via knockout against 23-fight veteram Hyung Seok Lee and by way of submission against 34-fight veteran Evgeniy Ryazanov.

There’s a decent chance that the featherweight title is about to change hands once again. Lee snatched the belt from Choi, who was an underwhelming 8-4 at the time of the fight. Outside of the doctor’s stoppage over Cesar, Lee hasn’t exactly seen many stiff tests. Park, on the other hand, has been very successful while fighting a number of competitive veterans.

Park has yet to lose, and Lee doesn’t look like a strong favorite to snap the challenger’s winning streak. This should be a close fight, but Park appears to be the better fighter. He’ll grab the belt with a decision victory.