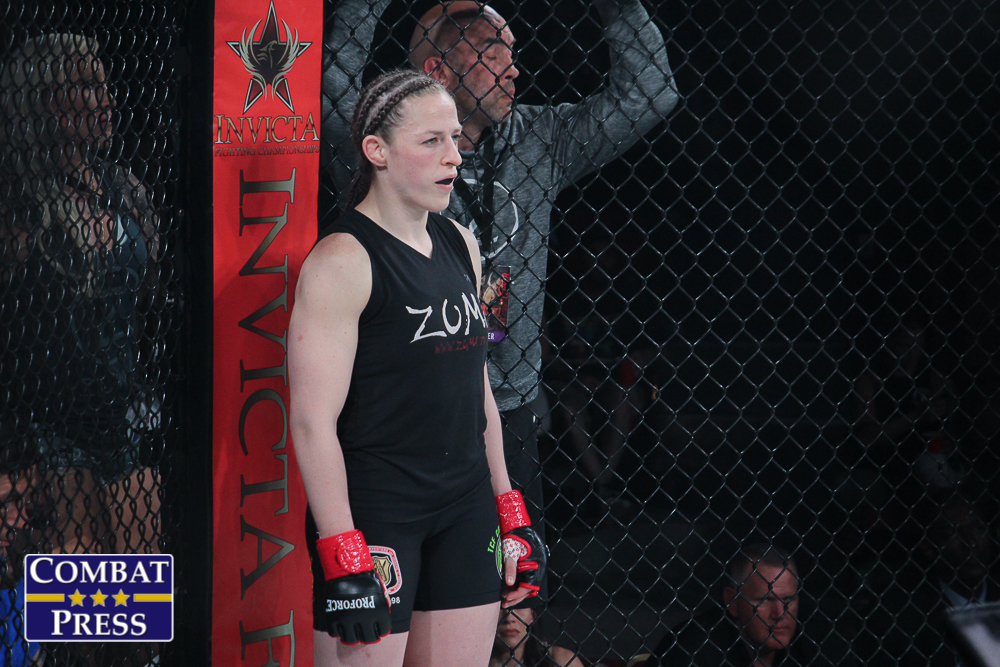 After a successful first season following the re-branding from World Series of Fighting to the Professional Fighters League, the PFL is now set to return with a second season of its unique brand of mixed martial arts.

The company, which employs a league format with standings that lead into a tournament playoff, has a coveted reward of $1 million for whoever comes out on top of each of the weight divisions. This year, the PFL adds its newest weight class, the women’s lightweight division.

The season kicks off on May 9 with new broadcasting partner ESPN. Let’s take a look at the eight women in the lightweight tournament and rank their chances to earn that big payday.

Outside of Kayla Harrison, Kaufman is the most recognizable name in this tournament. She’s also the favorite in this bracket, despite the fact she actually may be the smallest of the eight announced competitors. The UFC veteran has big-show experience, top-notch skills and the most polished resume of the bunch.

Kaufman is the Invicta bantamweight champion, an accolade she earned in her last fight when she choked out Katharina Lehner. Kaufman is known for her refined boxing skills. She uses good angles, footwork and punching techniques to score. She doesn’t have huge power, but her volume definitely does damage. She also has a proven track record, besting women such as Leslie Smith, Jessica-Rose “Jessy Jess” Clark, Liz Carmouche, Alexis Davis and Roxanne Modafferi.

Size may catch up with Kaufman somewhere down the line, but her experience and skills may allow her to overcome those physical disadvantages. Her striking is among the best in the field, and she will have a quickness advantage on many of her potential opponents. It was believed that her Invicta title win would garner her an invite back to the UFC, but scoring a million bucks against Goliaths to her David could be what gets the UFC to ink her back immediately.

Harrison is an actual legit 155-pounder, and she’s a powerhouse even for a woman in this weight class. She’s physically as strong as a bear. She has a judo background, and she was an Olympic gold medalist in the sport. She’s just 3-0 in her MMA campaign, but she’s been beyond impressive so far. She has scored finishes over Moriel Charneski and Jozette Cotton via TKO, as well as Brittney Elkin via armbar submission.

Harrison is among the biggest women in this pool of talent, which will be a big advantage for her. She also has grappling chops that are second to none. Most of her fellow tournament participants will be a step up in competition from what she’s seen thus far, but there’s no doubt she could be a million bucks richer by season’s end.

Dalziel, a Canadian prospect, is intriguing. She’s a 6-foot-tall lightweight who is large even for this weight class. If not for a long period of inactivity, Dalziel would likely be a top woman in either the lightweight division, which is scarce in talent, or the featherweight division.

The tall, hulking Canadian is an outstanding striker known for her kickboxing and power. She owns stoppages from a head kick and from knees. She uses the eight points of the Muay Thai style well. After besting respected fighter Jozette Cotton, she spent over two years on the sideline before finally returning in January to break the arm of Brittney Elkin.

Dalziel is definitely a top-three favorite in this field based on her physical and technical gifts. She may be among the most powerful women in the tournament, especially when it comes to her striking. She could provide some highlight-reel moments, depending on who she draws.

You may not know who Khautova is, and nobody would blame you if that’s true. That being said, she is a fighter out of Russia who has flown under the radar because she’s been unable to stay busy in the cage. She’s just 2-0, but even with such an inexperienced record, she is definitely in the running for the finals.

The Fight Nights vet is a legit lightweight who has even fought as high as welterweight, a rarity among female fighters. She’s a grinder who aggressively closes the distance and leans on her opponent. Khautova likes fighting in the clinch, where she wears out her opponent and lands shots to the body and head. She likes to strike as a means of setting up the clinch and takedowns. One of her victories came over top lightweight Zamzagul Fayzallinova.

Khautova is strong and imposes her will. She can be a point fighter, which in a tournament format will spare her from taking an excess of damage. She could be the true dark horse to take the whole thing.

Outside of Kaufman, Pacheco has the most big-show experience of any fighter in this field. The Brazilian is a 13-fight veteran. She fought twice in the UFC and participated in the most recent season of The Ultimate Fighter. This experience will give Pacheco an edge over some of the other less-experienced fighters in this bracket.

Pacheco is definitely a grappler. She is known for her Brazilian Jiu-Jitsu skills. She can strike a bit as well, but her best bet will come in closing the distance, securing top position, and fishing for a submission. Her biggest wins came over Irene Aldana and Karol Rosa. She mostly has faltered when stepping up in competition, as seen in her losses to Jessica Andrade, Germaine de Randamie and eventual TUF winner Macy Chiasson.

The Brazilian is still young at 24 years old, but she was a top prospect pre-UFC and is now fighting to stay relevant. This tournament can help her reach this goal. She’ll have to fight through some tough match-ups and move up to 155 from a previous career at 135 and 145 pounds. We’ll just have to wait and see if she can surprise us.

Formerly known as Roberta Paim Rovel, Samad comes into this tournament after a brief run with Bellator in 2015. She’s been on a hiatus since while enjoying her new role as a mother. Now, she returns with a chance at a million bucks. She has the opportunity to remind us of what made her a prospect some years ago.

Samad relocated to the United States after formerly training at the respected Astra Fight Team. She’s a pretty well-rounded individual, with solid striking and a strong ground game. Her wins in Brazil were against subpar opponents, though, which makes it hard to judge how she’ll perform against tougher competition. However, she did fight to a decision against Julia Budd, the current Bellator women’s featherweight champion.

Samad’s layoff makes it hard to really gauge her. Sometimes, female fighters come back from pregnancy with a fire lit under them. Other times, they have lost that very same spark. Samad’s value could move up quickly if she impresses, but the question marks leave her toward the bottom of the power rankings for now.

Outside of Harrison, Frier might be the most physically strong woman in this pool of talent. The Army veteran and current personal trainer has a thick upper body and is clearly a manhandler. She has fight experience and combat training, which could make her quite the dark horse.

Frier is just five fights into her career. She’s needed just two and a half minutes combined to pick up her four wins. The hulking Frier has spent her entire career with the Gladiator Challenge organization, which is notorious for pairing fighters with overmatched opponents. Unfortunately for Frier’s reputation, her wins have come against inexperienced nobodies.

Frier is a dark horse based on her physical gifts. Her power will translate into her striking, as well as into her takedowns and defense. Against the right opponents, Frier could surprise some folks and make an unlikely run to the top.

Fabian rounds out the field. The Kiwi fighter is just 1-0 in her MMA career. The featherweight is the World Muay Thai Council champion, an honor she won in February 2018 over Invicta veteran Charmaine Tweet. Fabian stands 5-foot-11, meaning she will be among the biggest women in this group.

Before Fabian took up kickboxing, a sport in which she holds a 7-2 record, she was a track-and-field athlete. She is very athletic, something that is invaluable to a fighter. She will run into problems, though, when she encounters women who have takedowns and ground competency. Fabian has been taking kickboxing bouts, but she has not competed in MMA since 2015. That’s a huge layoff from the cage.

Fabian has a high mountain to climb in this tournament, all things considered. Perhaps she will be the shocker of the year and make a run at a tourney win. However, she’s the biggest longshot of the eight women participating this season.