In this edition of our Combat Press Gear Review series, we’re not really reviewing a piece of gear, per se. Instead we’re taking a look into the PunchLab app which was developed with established martial-arts brand Hayabusa.

Now before we dive too deep into the app’s functionality, there are a few things you need before you use this app: a heavy bag belt, a smart phone, a heavy bag and some gloves. The bag and glove type doesn’t matter (but make sure you properly wrap your hands before doing any bag work). And the good news is that the app works with nearly every phone and can be downloaded for Android or Apple devices.

Setup is quick and easy. Simply load your phone into the belt, secure the belt to the bag and launch the app. You’ll perform a quick calibration step, which consists of throwing a few punches at varying power levels to help the app pick up your strikes. After that, you’re ready for your workout.

The app comes with various modes, all of which track your workout. The freestyle mode is probably best for those that are experienced with bag work and don’t need guidance. The tracking feature comes in handy in this mode, as it tells you how many strikes you’ve thrown and how much force they were thrown with — this is based on your initial calibration, of course. This mode also gives the flexibility to throw knees and kicks. For those less-experienced users, there is a combo mode, which helps the user put together realistic punch combinations used in combat sports. This mode utilizes the phone’s display to help with the user’s timing. 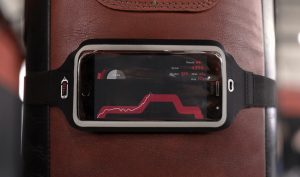 I know you’re asking, what’s the catch? Well, after you use up the app’s five initial day passes, there’s a monthly fee. Yet, in comparison to actual gym memberships, it’s quite the bargain. As someone who has paid nearly $200 per month to train at a professional gym and heard horror stories about mini-mall chain gyms charging nearly the same amount for cardio classes that don’t teach any technique, the $4 per month price tag for PunchLab is worth it. The app gives you the flexibility to work out on your time, but with guidance from a well-known industry leader.

After using the app for a while, I do have a couple of complaints. First, unless you’re in a workout, the app allows your phone screen to timeout and you’ll need to unlock it again before proceeding. This seems minor, but if you happen to use the fingerprint unlock function — especially on a Samsung S9 where the fingerprint reader is on the back of the phone — you can become quickly frustrated while you’re trying to take your gloves on and off to keep your phone operational. Thankfully, this issue can be remedied a few ways on the phone side.

The other issue I ran into while using the app in combo mode was that my hanging heavy bag tends to spin. In an open gym, where you could simply use your footwork to follow the phone, this wouldn’t be an issue. But in a tight space, I found myself trying to keep the display within sight and began quickly falling off rhythm. I believe the best solution to this issue would be to use this app with a taller, Muay Thai bag like the 6-foot one that Hayabusa offers.

That said, the bottom line is that the app is simple to use, it’s low cost and it accurately tracks your workouts. My preference was definitely freestyle mode, where I could mix in some kicks and knees. Even if you were starting from scratch, buying a belt, bag and gloves, you could still use this app for over a year and save money over a gym membership. The interactive nature of it prevents the workout from getting stale, too.