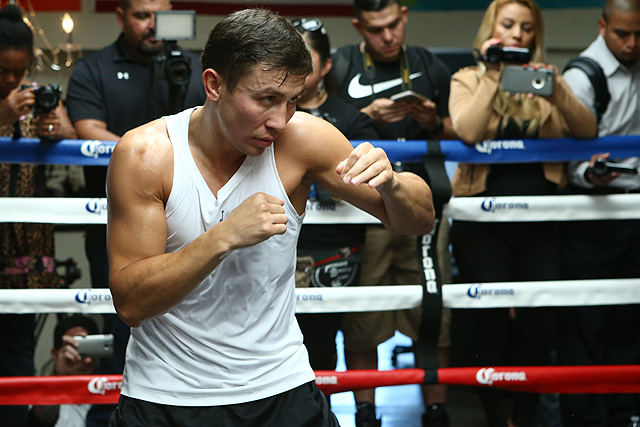 The Weekend in Scraps: Canelo-Golovkin Ends in a Draw, Rockhold Returns, Violence in the U.K.

UFC Pittsburgh was an under-the-radar fight card, largely overshadowed by the weekend’s big boxing event. However, it delivered great action and a variety of finishes. Gilbert Burns kicked off the night with a violent knockout of Jason Saggo, setting the tone for the evening. Uriah Hall scored a massive comeback after getting dominated by Krzysztof Jotko during the first round. Kamaru Usman continued his ascension through the welterweight ranks, calling out Rafael dos Anjos after demolishing Sergio Moraes. Gregor Gillespie put on a show in submitting Jason Gonzalez with an arm-triangle choke. Anthony Smith also scored a big comeback, knocking out Hector Lombard in the third round. Finally, former champion Luke Rockhold bounced back from losing his belt by pounding out David Branch in the night’s main event.

Hall’s career trajectory has to be infuriating his fans. Since making it to the finals of The Ultimate Fighter 17, the man who looked like the second coming of Anderson Silva on the reality series has turned into a fighter who can’t string together more than two wins in a row. Yet, Hall remains a borderline top-10 fighter thanks to his big knockout of Gegard Mousasi in 2015 and victories like his come-from-behind performance against Jotko this weekend. Hall’s recent three-fight skid did come against the elite trio of Robert Whittaker, Derek Brunson and the aforementioned Mousasi, but it included two first-round stoppage losses. If Hall could just find some consistency and protect his own chin, he could turn into a legitimate contender.

Speaking of consistency, how about Anthony Smith? The man’s career mark is 28-12, but he’s been on a real tear since 2014. In the last three-plus years, Smith has lost just once, via decision to Cezar “Mutante” Ferreira, while piling up stoppages en route to an 11-1 run. Smith has finished three straight opponents via strikes, including two by way of knockout and one via technical knockout.

Meanwhile, how the mighty have fallen. Once a seemingly unbeatable force in Bellator, the aforementioned Hector Lombard has not won a fight since 2014 — unless we count his overturned victory against Josh Burkman in 2015. He’s now lost four straight. Lombard, 39, is getting up there in years and might be done inside the UFC’s Octagon.

ONE Championship’s trip to Indonesia for Total Victory ended in controversy. Former champion Kairat Akhmetov defeated Geje Eustaquio by split decision, but the controversy stemmed from the fact that Eustaquio appeared to render Akhmetov unconscious during the fight. The referee failed to stop the contest, though. The blunder allowed the Kazakh fighter to recover and work his way to a win on the scorecards.

The most action-packed round of the weekend took place in the Cage Warriors arena in London. The promotion’s bantamweight champion, Nathaniel Wood, was nearly stopped by challenger Josh Reed in the opening minutes of the fight, but somehow survived and mounted a comeback. When Reed went for the kill, he left his chin exposed and Wood capitalized with an onslaught of his own. Reed could not withstand the barrage and the referee stepped in to halt the contest.

Cage Warriors wasn’t the only U.K. promotion to bring action to London this week. BAMMA hosted its 31st event on Friday. It was a night for the challengers, as three titles changed hands at the event. Alex Lohore took the welterweight strap from Nathan Jones with a violent first-round knockout. Mike Shipman dethroned Yannick Bahati, also by knockout, to claim the middleweight title. Finally, Daniel Crawford overwhelmed Damien Lapilus in the second round to capture the featherweight crown.

Cage Fury Fighting Championships hosted its 67th event in Philadelphia on Saturday night. The night’s main event lasted under a minute. Pat Sabatini left with the featherweight title after submitting John de Jesus in 50 seconds with a heel hook.

The biggest fight of the weekend took place in Las Vegas on Saturday night when Gennady Golovkin, better known as “GGG,” took on Saul “Canelo” Alvarez on HBO pay-per-view. The fight was largely a clash of styles. GGG pressured forward throughout, firing his jab with regularity. Canelo was content to sit back on the ropes and counter with power shots to the head and body. The fight went the distance

That’s when a tremendous fight between two of the best boxers on the planet went sour. One judge had it 115-113 for GGG, matching the scorecards of Combat Press writers Zach Aittama and Rob Tatum. Another had it a 114-114 draw, and Adalaide Byrd turned in a 118-110 card for Canelo, leaving the fight as a split draw.

An argument could be made for Alvarez winning the fight, but to give him 10 of the 12 rounds is nothing short of insanity. It came as no surprise to hear pundits like Teddy Atlas of ESPN questioning whether Byrd had been paid off by the promoter, as the scorecard is indefensible.

Jesus Rojas got a big victory on Friday Night over the highly ranked Claudio Marrero in a featherweight bout. Marrero fought fairly well early, but kept showboating a lot in spots. It often backfired and allowed Rojas the opportunity to outwork him on the ropes and enjoy long stretches of success. In the seventh round, Rojas threw a three-punch combination of a left hook and right hand, followed by another left hook. The third punch in this combination caught Marrero flush on the button and dropped him for the count, giving Rojas the knockout victory.

Callum Smith scored a unanimous decision over Erik Skoglund in the quarterfinal round of the World Boxing Super Series Tournament’s super middleweight bracket. He controlled the majority of the action from the outset and scored a knockdown of Skoglund in the 11th round to secure the victory.

Billy Joe Saunders defeated Willie Monroe Jr. in a dull contest in the United Kingdom on Saturday in defense of his WBO middleweight championship. The two fighters were very tentative throughout the contest and kept fighting at a very measured pace. The win for Saunders didn’t excite anybody who took the time to watch, but it keeps him in the mix for other potential big contests against GGG, Canelo, Danny Jacobs or David Lemieux.