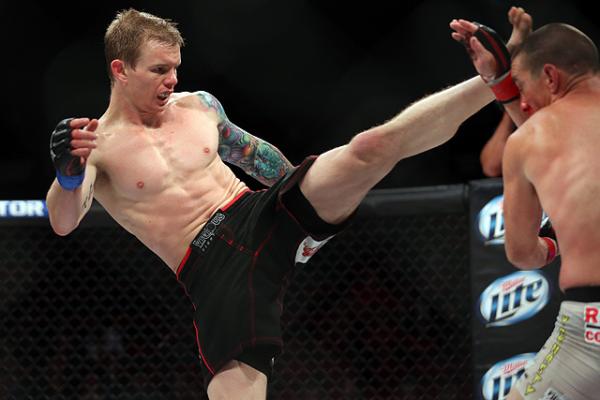 “My dad can beat up your dad.”

This quote is one of the most hilarious things to an adult. As a young boy growing up, though, it means a lot for a kid to be able to say this — especially if it’s true. Pro fighter, gym owner and proud husband Austin Springer has two young boys, and they will certainly have the privilege of tossing this assertion around when they are growing up.

Springer’s two boys, Jaxon and Zander, who are seven years old and four years old, respectively, spend a lot of time with their dad. With his wife Danielle working full-time for an engineering firm, Springer has them in the gym almost every day.

“They’ve kind of grown up inside the gym,” Springer told Combat Press. “I imagine, like any dad would want, you want them to wrestle [and] you want them to do martial arts, but I don’t push that on them. I don’t want to put them into something and have them be burnt out at a young age and not want this. I just have always brought them with me everywhere I go, whether it’s conditioning, wrestling or whatever the practice is, so they can see it — they can see dad doing it.

“When they see I’m enjoying something, they get interested in it. So it’s been really cool to see them move toward that. They love wrestling. They love boxing gloves. They love putting them on. I have a bag rack in my garage, and they enjoy going out there and wrestling and hitting the bag. It’s fun to see them starting to enjoy the things that I enjoy, but enjoying them because they like them.”

With Father’s Day coming up this weekend, most guys are planning out barbecues, relaxation, hanging out with family and maybe a little beer drinking. Springer, the owner of Vancouver Elite Martial Arts in Vancouver, Wash., likely had a similar plan in mind, but now the father of two won’t be doing much of the above.

On Tuesday night, the second episode of the second season of Dana White’s Tuesday Night Contender Series takes place at the UFC Training Center in Las Vegas. Georgian kickboxer Giga Chikadze, who is also 5-1 in MMA, was slated to fight Youssef Zalal in an effort to impress UFC boss Dana White and earn a UFC contract. However, Zalal was forced to pull out. Now, on less than four weeks’ notice, Springer is in.

“I was actually out of town, going camping with big plans for the weekend,” Springer said. “My manager and I had been communicating back and forth, and he brought this to the table. He said that this had just happened and asked if I wanted to slide into this spot, and I said, ‘Yeah, absolutely.’ So, it went from this weekend of barbecuing, drinking beer and sitting outside to a weekend of dieting, exercising and drinking lots of water.”

Springer was not in camp at all. The Brazilian Jiu-Jitsu purple belt was actually training for an EBI-rules jiu-jitsu match at the end of the month. He hadn’t fought since the beginning of the year. Springer was actually supposed to have fought twice this year already, but the second bout never came to fruition.

“I had two fights back-to-back, three weeks part, and I let both promoters know what was going on, and both were fine with it,” Springer said. “After the first fight, I was a little banged up, and I didn’t want to go into a hard fight right away, to be honest with you. I had a couple little, small injuries that came up over the previous training camp, and I thought I could push through, because the first fight was soon enough. But after the first fight, I was a little too banged up and didn’t want to risk it.”

Springer’s first fight took place at Conquest of the Cage on Groundhog’s Day. He was able to pick up a third-round knockout over Troy Berglund in a tough contest.

“I feel like I had a good performance — kind of a picture-perfect fight,” Springer admitted. “I wish that I had maybe let my hands go a little sooner. I know that he had a lot of power, and that was his only way to win — to get a lucky shot. At times, instead of letting four or five punches go in a row, I would let two or three. I think if I would have let four-, five- or six-strike combos go at a time, I could’ve finished the fight sooner. I got in there. I got the win. I got the knockout. So I can’t complain.”

In addition to training at his own gym in Vancouver, Springer’s primary MMA camp is at Gracie Barra Portland right across the Columbia River. He trains BJJ there and also takes private striking lessons from boxing coach Andy Minsker. Springer is always ready to go, which made the transition from Memorial Day camping to a fight camp a lot less difficult than it would be for most fighters.

“When I’m getting ready for a fight, my schedule doesn’t really change too much,” Springer said. “I was still training regularly. I was still hitting pads. I was still sparring. I was still doing conditioning. It was really good timing, to be honest. Four weeks is just enough time to peak, and I already had a base foundation for conditioning and my timing. My weight was a little high, but my diet is on point, and I’m a little lower than what we expected to be a week out from the fight. It’s just awesome.”

Springer’s opponent is no joke. While Chikadze may only have six MMA fights to date, he is also 38-6, with 22 knockouts, as a pro kickboxer. In MMA, all five of his wins have come by knockout. His only loss was a decision. Chikadze has yet to be stopped, but Springer welcomes the challenge.

“It’s a great match-up,” Springer said. “He’s a very polished kickboxer. He fights for GLORY. If you look at his MMA record, he has a good record, but when you look at the guys he’s fought, it takes away a little bit. Now, I’m not discrediting him — he’s an excellent fighter — but I don’t think that he has fought somebody at the caliber of me. I think I can swim with him in the striking department, but I don’t think he can swim with me on the ground.”

The Contender Series has become a great platform for up-and-coming fighters to transition into the big show. Springer is ready for this next step. With a pro career spanning almost 11 years and more knockouts on his record than Chikadze has total MMA fights, Springer is more than confident in his chances of impressing the UFC brass. However, while a win and subsequent UFC contract would make a great Father’s Day gift, his boys will not be in attendance.

“When they were younger, they did see some [of my fights],” said Springer. “I actually have some really awesome pictures of my oldest son inside the cage with me after one of my wins. But, now, fighting at this high of a level, anything can happen. I would hate for me to get really hurt and them to be there and see that. When they get a little bit older, I’ll let them watch the old fights — when we know the outcome and there’s no severe injuries or anything.”

For now, Springer is not focused on anything else. The win is his primary focus on Tuesday night. Chikadze is no walk in the park, but the Washington native has grappling and experience on his side.

“The fight will not be boring,” said Springer. “A lot of people kind of just watch the UFC, because they don’t have an emotional connection to fights and they don’t know what to expect. This fight, you can expect excitement.”