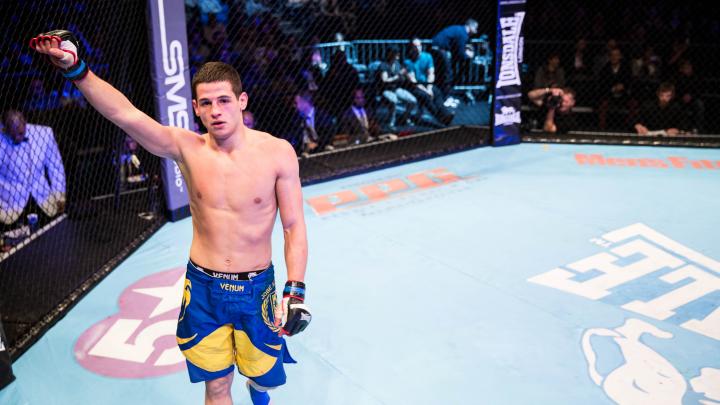 UFC on Fox 24’s Tom Duquesnoy: A Name to Watch

UFC on Fox 24 is littered with high-profile bouts and marquee names. Beyond the names MMA fans are familiar with is one that should cause fight fans to sit up and take notice. His name is Tom Duquesnoy.

For years, European MMA fighters weren’t always considered on the same level as their North American counterparts. However, guys like Michael Bisping, Conor McGregor and Khabib Nurmagomedov showing that MMA fighters outside of North and South America could reach elite status. Now, UFC debutant Duquesnoy is out to continue this recent trend.

Fans who fancy themselves scouts have had Duquesnoy on their radar for quite some time. The “Fire Kid” has only been competing since 2012. He is just 23 years old, but he has already made a name for himself in Britain, where the Frenchman earned the BAMMA featherweight title in just his second fight with the promotion. During his time with BAMMA, Duquesnoy went undefeated with all but one of his wins coming before the final bell. His highlight-reel knockout of Shay Walsh was particularly violent.

His run was impressive not only for the manner in which he defeated his opponents, but also because it came in two weight classes. After defending his BAMMA featherweight strap three times, Duquesnoy dropped down to the bantamweight division. Duquesnoy made a thunderous statement by knocking out Damien Rooney in just over a minute. The win propelled the featherweight champ into a title showdown with Walsh. The exciting finish scored by Duquesnoy over Walsh earned the French fighter a championship in a second weight class.

Outside of the title of multiple-division champion, Duquesnoy had done more than enough to earn a shot in the big leagues. He won another bout in BAMMA, but eventually the UFC came to a deal with the Parisian.

Patrick Williams is the man tasked with spoiling Duquesnoy’s Octagon debut. It’ll be the first fight for Williams in 10 months, meaning we could see some hesitancy on his part. Opponents can’t afford this luxury when facing a devastating finisher like Duquesnoy. Williams isn’t expected to pose a challenge to Duquesnoy. A win for the Frenchman would cement his place on the UFC’s roster, but it’ll also very likely propel him into a high-profile bout. A division that was once an afterthought, the UFC’s bantamweight roster is full of very good fighters. Although he’d be 1-0 in the UFC, Duquesnoy’s significant hype would force the UFC to insert him into the top half of the division should he defeat Williams at UFC on Fox 24.

While already home to some of the most exciting fighters, the division will receive another boost of adrenaline when Duquesnoy debuts on Saturday night. It may be scheduled for prelim action, but this is one fight MMA fans should sit down and watch. Fox viewers — the prelims air on the big parent station — will have the pleasure of enjoying the level of violence the “Fire Kid” is capable of unleashing.