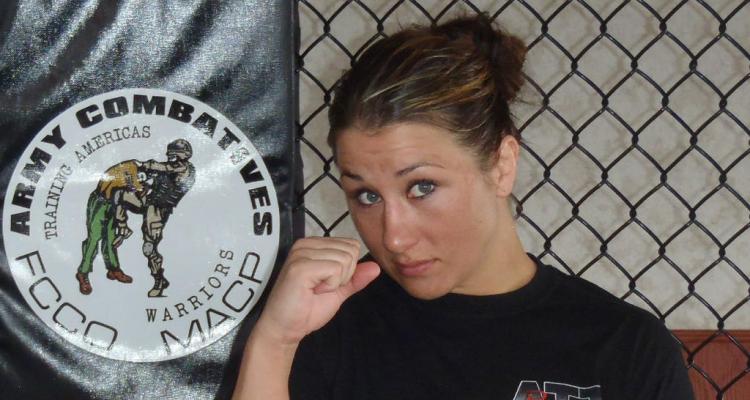 Sharon Jacobson: Wrestler Ready to Make Her Mark on MMA

The martial arts started because of need. The need to protect the vulnerable from pillagers. Learning combat skills was just as important as learning to farm. Sometimes even more. The first known records of sport instruction are from Greece, and they deal with wrestling. Wrestling is one of the best foundations an MMA fighter can have. Building other skills seems to come easier to wrestlers than if, say, a boxer needs to pick up wrestling.

Sometimes, it can be a double-edged sword because it’s harder for up-and-coming wrestlers to get fights. Sharon Jacobson, a 1-1 pro fighter, knows about this struggle.

“Sometimes, I feel like it’s an excuse for bitchassness,” Jacobson told Combat Press. “Shannon Sinn was supposed to fight Ashley [Deen] as an amateur, but Ashley had to pull out of the fight. I was telling people that I wanted to step in, but Shannon turned it down. She said that she had been training for Ashley, who is more of a stand-up fighter, and she needed to change her training to handle my wrestling. But this is MMA. You have to be ready for anything to happen in the cage.

“And this was when we were all amateurs, so that is the time that you should take those challenges. You can take those risks and those last-minute fights. It’s OK if you lose. This is when you’re working on your skills. I took a fight against DeAnna Bennett knowing that she is a tough girl. I had to drop 26 pounds. And I lost. I lost quickly [laughs], but it was good experience. I had to take what I could get. Now, as a pro, I understand you have to be more cautious. You could really risk losing rank and better fights. But, at the same time, why are you in the game if you don’t want to be challenged?”

For a girl growing up today, getting into wrestling is a little bit more common than when Jacobson was a teen.

“I grew up in Southern California, near the Mexican border. It was about an hour and a half away from the ocean in the high desert,” she explained. “My brother was the only boy, with four little sisters, so he treated us like his little brothers — wrestling, boxing. We were more aggressive than other girls but, still, I didn’t really want to do it at first. My sister was taking a weightlifting class and she told me to do it. And then she joined the wrestling team, but I really didn’t want to do that. I told her, ‘I am only wrestling you,’ so I joined. The singlet scared me. It turned out that she didn’t stick with it, but I did.

“My coach, Glenn Takahashi, bragged about me. It felt good to be good at something. I am smart, but I was never dedicated to school. In fact, I wasn’t even going to go to college until I found out that they had girls’ wrestling. I miss Coach Takahashi. He was like a second dad to me.”

Jacobson went to the University of Minnesota-Morris for a year and then transferred to Northern Michigan University, where she wrestled, and then decided to go into the Army. Her “job” in the Army was listed as “Heavy Equipment Operator,” but she wrestled for four years. That is what brought her to Colorado Springs and the WCAP.

WCAP stands for World Class Athlete Program, and it serves as the Olympic training grounds. Almost everything can be learned there at the highest levels. It’s got the nutrition, tech, coaches and athletes to raise any athlete’s game. Getting into MMA just seemed to make sense to Jacobson after she left the Army.

“Seeing the success of Randi Miller in Invicta 1. Sara McMann and Cat Zingano. It just felt like a natural way to go. And I think MMA is actually easier on the body during training. Not in the competition, obviously, but day in and day out. Wrestling is a lot of pressure, torque, twisting and turning and repetition, where MMA is different from day to day. Stand-up, jiu jitsu — you’re moving in so many more ways.”

Jacobson first started training MMA at Pariah gym, which is where her next opponent trains. But she switched over to Shin Gi Tai Jiu-Jitsu, also known as Slaughterhouse, with Jeremy and Ernest Kimball. She works on her boxing at the WCAP facilities.

Jacobson might have lost her fight against Bennett, but she was able to follow up with a decisive win over Katie Anita Runyan in the first minute of the first round.

“I went for the takedown pretty quick, and when I slammed her, she landed with her arms stuck behind her,” recalled Jacobson. “I mounted her and she couldn’t defend herself, so they called it pretty quick. I have to say, though, that she was great. She took that fight on just a few days’ notice.”

The win earned Jacobson some buzz and a spot on the Invicta FC roster. However, before she gets to fight for Shannon Knapp and the gang, she faces Ashley Deen at an NMEF show in Colorado Springs, Colo., this weekend.

“Ashley is a tough girl and is known for her stand-up. We were teammates at Pariah and she was in my corner for the fight I lost because my main coach couldn’t make it,” said Jacobson. “Some people were hyping this fight up, as I called her out, but it’s not like that. I just wanted to fight. I know she used to play soccer, so I am sure she has a good gas tank. It’s going to be a good fight for sure.”

The wrestling base is there, and Jacobson has complemented it while training with elite athletes. The flyweight division better watch out, because this wrestler is set to make her mark.

Sharon would first and foremost like to thank her family for being so supportive and God above for making this possible. She would also like to thank her gym, Shin Gi aka Slaughterhouse, and coaches Ernest and Jeremy Kimball, Joe Guzman and the rest of the staff and athletes at WCAP Boxing, the WCAP wrestling staff and athletes, and her fans. She urges everyone to check out her walkout shirt from Mass Destruction MMA. Follow Jacobson on Twitter: @sharonjmma
Advertisement