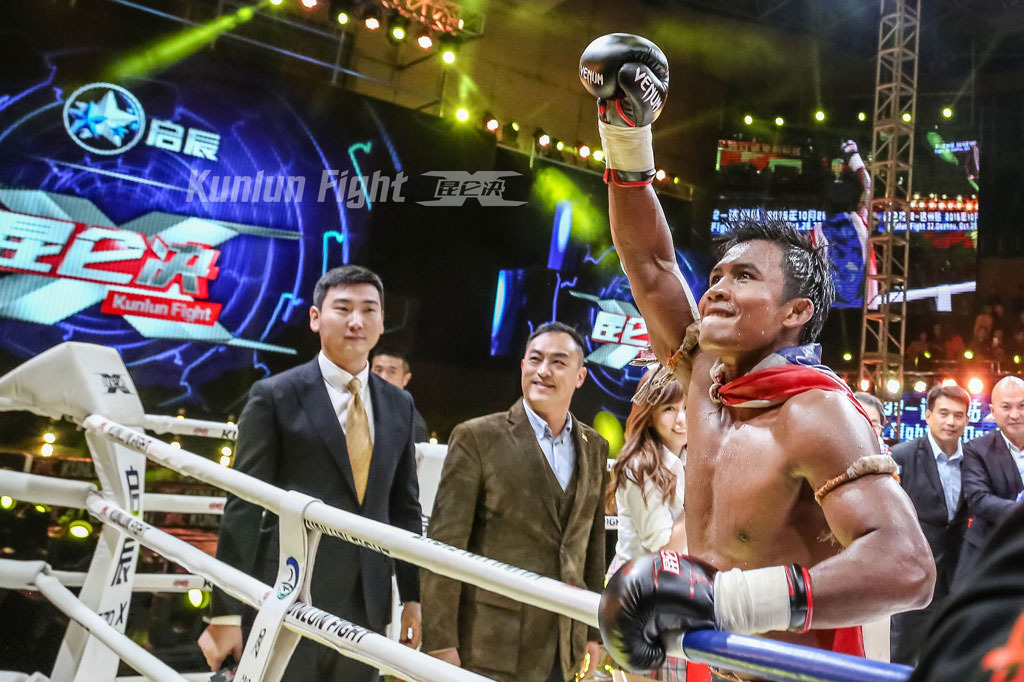 Kunlun Fight, one of the world’s top kickboxing promotions, returned to Dongguan, China, on Sunday, March 20, for Kunlun Fight 39. The 11-fight card featured two four-man, one-night tournaments as well as both MMA and kickboxing rules bouts.

The world’s most popular Muay Thai fighter, Buakaw Banchamek, successfully returned to the ring following his exhibition battle at Kunlun Fight 38 last month. Buakaw’s storied kickboxing career continued with another dominate performance against 2015 Kunlun Fight 70-kilogram tournament quarter-finalist Kong Lingfeng. Buakaw was on cruise control to start the contest, but one hard punch from Lingfeng made Buakaw put his foot on the pedal and turn up the aggression. Buakaw pushed a tremendous pace in the second and third rounds to take the unanimous decision.

Chinese kickboxer Gui Hui replaced Liu Mingzhi on short notice against former K-1 MAX Grand Prix winner Albert Kraus. Mingzhi wasn’t able to fight after a demanding weight cut, so Hui, who was scheduled for Kunlun Fight 40 next week, stepped in on short notice to take on the Dutch kickboxing veteran. Hui surprised many when he defeated Kraus after four hard-fought rounds.

Artem Pashporin battled with Victor Nagbe and Li Zhuangzhuang to qualify for the final 16 of the Clash of Titans 70-kilogram tournament. Zhuangzhuang defeated MMA fighter Bruno “Robusto” Miranda by decision in his semifinal bout.

In the other four-man tournament, Zhao Shuai took decisions from Seyedisa Alamdrnezam and Vladimir Konsky to qualify for the final 16 among Dzianis Zuev, Khayal Dzhaniev and Pashporin. Vladimir Konsky defeated Moroccan kickboxer Haim Ait Hma in the other semifinal bout.

The event aired live on Jiangsu TV in China and Workpointe TV in Thailand. The event replay can be watched on YouTube.