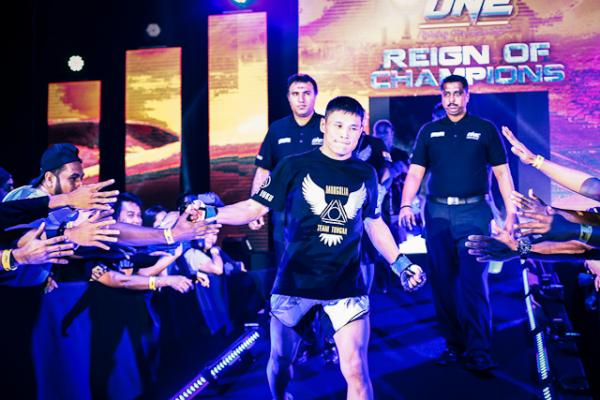 ONE Championship: ‘Dynasty of Champions’ Preview and Predictions

ONE Championship returns to the Beijing Gymnasium of National Olympic Sports Centre on Saturday, Nov. 21, for ONE Championship Wujie: Dynasty of Champions. The promotion is returning to Beijing, China, for the first time since its inaugural event in the city in December 2014. The nine-fight card features two championship bouts and the return of the Beijing featherweight tournament.

The main event of the evening is the long-awaited clash between the interim ONE featherweight champion Marat Gafurov and ONE featherweight champion Jadambaa Narantungalag. This fight was previously scheduled to headline ONE Championship: Odyssey of Champions on Sept. 27 before Narantungalag was pulled from the card due to travel restrictions into Indonesia. However, the match was not canceled. Instead, the promotion pulled Martin Nguyen from an undercard bout to face off with the undefeated Gafurov. Gafurov remained unbeaten in another stellar performance inside the circular cage.

The co-main event features ONE flyweight champion Adriano Moraes looking to hand “The Kazakh” Kairat Akhmetov his first professional loss in his 22-fight career. The fight will be the Brazilian champion’s second defense of his title against an opponent making his debut with ONE Championship.

The main card features four fights, including the ONE Championship debut of clashing fighters Nikolay Aleksakhin and Burenzorig Batmunkh. The 24-year-old Russian prospect Aleksakhin has won nine of his last 10 bouts dating back to 2012. Batmunkh fought his way through the Mongolian kickboxing and MMA circuit, fighting the current ONE featherweight champion in 2010. Both men are coming off of impressive knockout wins in their most recent bouts.

Southeast Asian fighters Trestle “Mario” Tan and Jeff Huang clash in a rematch of a May 2015 bout at PRO Fighting 10 in Taiwan. The first bout ended in just nine seconds when Tan landed a huge left hook that put Huang down against the cage. Tan put an end to the bout with a series of crushing right hands that left Huang unconscious. Huang was favored heading into the bout after running his ONE Championship record to two wins with no defeats. Tan will be making his ONE Championship debut following a loss at the Mixed Martial A’rr event that took place on a pirate ship just off the shores of Singapore, really.

The Beijing featherweight tournament final will open the main card. The tournament fights will be streamed live on ONE Championship’s Facebook page. The undefeated Yang Sen takes on Ala Teng Bu Ri Ge De in the first semifinal bout, while Qiao Long Fei takes on Zhang Jia Cai in the second semifinal contest. Wang Ya Wei will fight Ma Jia Wen in the evening’s opening bout and tournament reserve match.

The three-fight Facebook preliminary card begins at 5 a.m. ET. The main card will stream via internet pay-per-view at ONEPPV.com.

This long-awaited match was certainly missed in Indonesia, but may be much better placed on a card in Beijing. A clash of two neighboring countries, Mongolia and Russia, this bout will bring fans into the seats of the Beijing Olympics Sports Gymnasium.

Jadambaa Narantungalag is a 39-year-old Mongolian fighter who has been fighting for over 10 years in both MMA and kickboxing. He began his career training in judo as a child and moved on to Kyokushin Karate as a teenager. Narantungalag’s style of fighting certainly showcases a flashy kicking game. While Narantungalag has fought all over the world, he first made his name in Japan on the losing end of bouts with kickboxing greats Buakaw Banchamek, Albert Kraus and Masato. Narantungalag showcased not only his toughness, but his ability to improve by taking the kickboxing legends the distance. He returned to MMA in 2009, shocking many of the hometown fans when he took a decision victory over Akihiro Gono and knocked out top Japanese lightweight Kazunori Yokota in 2010. Narantungalag went on to win the now-defunct Chinese promotion Legend FC’s lightweight title with victories over ONE veteran Adrian Pang and UFC veteran Nam Yui Chul. Narantungalag lost his title to ONE veteran Koji Ando in 2013 due to injury, but he would get right back to winning a year later when he made his ONE Championship debut against Honorio Banario at ONE FC 16: Honor and Glory. Narantungalag won the title in his most recent bout with a five-round decision win over Koji Oishi at ONE FC 19: Reign of Champions.

Marat Gafurov is a 30-year-old undefeated Russian prospect training out of the Dagestan region of Makhachkala. He began training at an early age coming up in the Makhachkala University. Now training out of DagFighter, Gafurov has amassed 12 career victories and multiple titles in his five-year career. He fought his way through the M-1 Global ranks early in his career and earned a win over UFC veteran Mairbek Taisumov before capturing the M-1 featherweight title at M-1 Challenge 35 with a submission win over Vugar Bahshiev in 2012. Gafurov defended his title twice before moving to ONE Championship in 2014. He has appeared in the circular cage three times, turning in impressive finishes in each bout. Gafurov landed a strong head kick just seconds into his debut bout with top featherweight Rob Lisita before wrapping up a rear-naked choke submission just 68 seconds into the first frame. The Russian continued his dominance by stopping Ev Ting with just 30 seconds remaining in the first round of their ONE Championship: Warrior’s Quest bout in May 2015. Gafurov most recently fought and won the interim ONE featherweight title against short-notice opponent Martin Nguyen. The choke finish came just 41 seconds into the first frame, capping off another dominant victory for the hungry featherweight prospect.

While both men are well-rounded competitors, this is certainly a clash of styles. Narantungalag has made a name for himself through gritty striking performances and smart situational grappling. He employs a flashy kicking arsenal that makes even the best strikers jealous, but he will opt for a more structured approach to kicking the body and legs of his Russian foe. If Gafurov is one thing, it’s a high-level submission grappler. Time and time again throughout his career, he has shown to be the superior grappler in the exchanges. The Russian has not been tested on the ground since one of his M-1 title defenses against American fighter Lee Morrison. Narantungalag will be a tough fighter to get and keep on the floor, however, as he has shown an underrated scrambling ability.

This fight very well could be a war of attrition unless Gafurov keeps up his recent trend of finishing fights early and often. This fight will hit the championship rounds. If Gafurov can’t lock in a choke, he will get very close to it. Gafurov takes at least three of the five rounds and unifies the ONE featherweight title.

Adriano Moraes is a 26-year-old Brazilian training out of the Constrictor Team in Brasilia, Brazil. The young flyweight has impressed in his four-year professional career. Moraes won his first major regional title when he stopped the previously unbeaten prospect Dileno Lopes with a body kick in the third round of their Shooto Brazil 40 flyweight title match in 2013. The win earned Moraes a shot in the circular cage, but it was a shot that became his only setback in his 14-fight career when he lost a split decision to Russian fighter Yusup Saadulaev. The loss didn’t deter Moraes. He defeated UFC veteran and top flyweight fighter Yasuhiro Urushitani in his return bout in March 2014. The win would start a streak of four consecutive victories for the young Brazilian, who earned his ONE flyweight title with a win over Geje Eustaquio at ONE FC 20 in September 2014. Moraes most recently defended his title against the previously unbeaten Asuka Mikami at ONE FC 25 in March.

Kairat Akhmetov is a 28-year-old prospect with 22 wins in his professional career. The brash Kazakhstani fighter is not short on personality or fighting skill. Akhmetov trains with a stable of talented fighters, including ONE veteran Kuat Khamitov, at the Alash Pride gym in Almaty. He fought his way through the completion in Kazakhstan, finishing 18 of his 22 opponents. Akhmetov most recently knocked out Lithuanian fighter Artemij Sitenkov at an Alash Pride FC event in October.

Akhmetov will be making his ONE Championship debut against the best flyweight in the promotion and maybe the best flyweight fighter outside of the UFC. While Akhmetov doesn’t have experience fighting at the highest levels, he makes up for that in his tenacious approach to fighting. He is an athletic fighter who fights from the southpaw position. This may be of an advantage when Akhmetov shoots in for his takedown on the lead leg of Moraes. Akhmetov is a well-rounded fighter, but he does his best work after the takedown. He will work his heavy ground-and-pound from the mount or the guard — it doesn’t matter, he just wants to hit you.

Moraes can certainly tangle with “the Kazahk” on the mat, but he may better served to pick him apart on the feet and look to work in takedowns of his own. Moraes may be just a little bit better in all areas of MMA. Akhmetov’s style might lend into the champion’s ability to lock in a submission in a scramble, but this fight could certainly hit the championship rounds if Akhmetov can push Moraes in the early going.

The ONE flyweight champion will defend his title for the second time after locking up a submission midway through the fight.