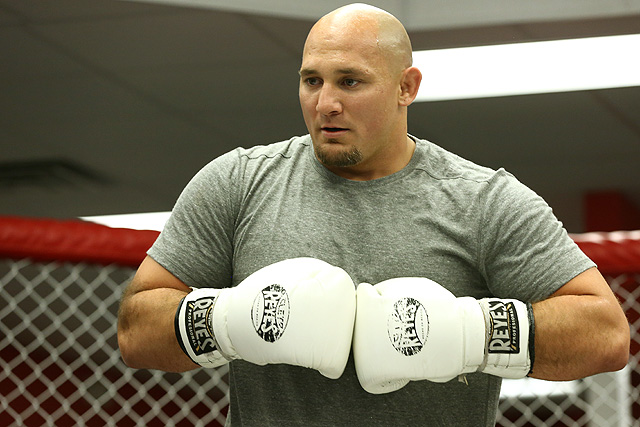 When former Pride President Nobuyuki Sakakibara announced he was launching a new MMA promotion, later to be named the Rizin Fighting Federation, many followers of the sport were excited at the new venture. Much of this excitement centered on Sakakibara officially proclaiming that his new promotion would host legend Fedor Emelianenko’s return to competition.

It’s now been a few weeks since the announcement and we’re left waiting to see who exactly Emelianenko will square off against at the New Year’s Eve show. The official press conference in Tokyo came and went recently. The Rizin name was announced, but there were no further revelations about Emelianenko’s opponent. There have been reports that kickboxer Jaideep Singh, who is 1-0 as an MMA fighter, would be Fedor’s opponent, but that has yet come to fruition.

Fedor doesn’t have a shortage of potential opponents. And there’s one heavyweight who, if it was up to him, would like to be the one to get the opportunity.

“I want to fight Fedor. He’s a legend in the sport and one of the best heavyweights ever. He’s one of the reasons I got into this sport,” said Shawn Jordan when speaking to Combat Press. “I started watching Fedor when I was still playing football. He had a calm demeanor. [He] was very controlled, but dominant at the same time. To be able to compete with that guy would be an honor and a great experience for me. After getting banged up in my last fight and not competing very well, I’d like to go and get a fight like this to get that bad taste out of my mouth.”

Jordan’s four-fight UFC contract recently ended, and though he has no ill feelings about competing there and hasn’t ruled out a return, he sees this is an opportunity for him to explore other options.

“This isn’t just a competitive decision,” said Jordan. “It’s an avenue to make real money and get a paycheck, because it’s Fedor. Everything about this fight is beneficial for my career. I don’t know how long I’m going to be able to keep doing this. Fighting right now has to be worth it and a contract has to be worth being away from my daughters. I could come back and get an engineering job here in Baton Rouge and make a consistent living, so, yeah, it has to be worth it.

“On a personal and professional level, I have to look around and if I don’t find something that’s worth it, then so be it. But it’s nice to go around and look to see if I’m worth more to somebody. And if the UFC can match what somebody offers, that’s beneficial too.

“We’ll see how it plays out, but I really want the opportunity to fight Fedor.”