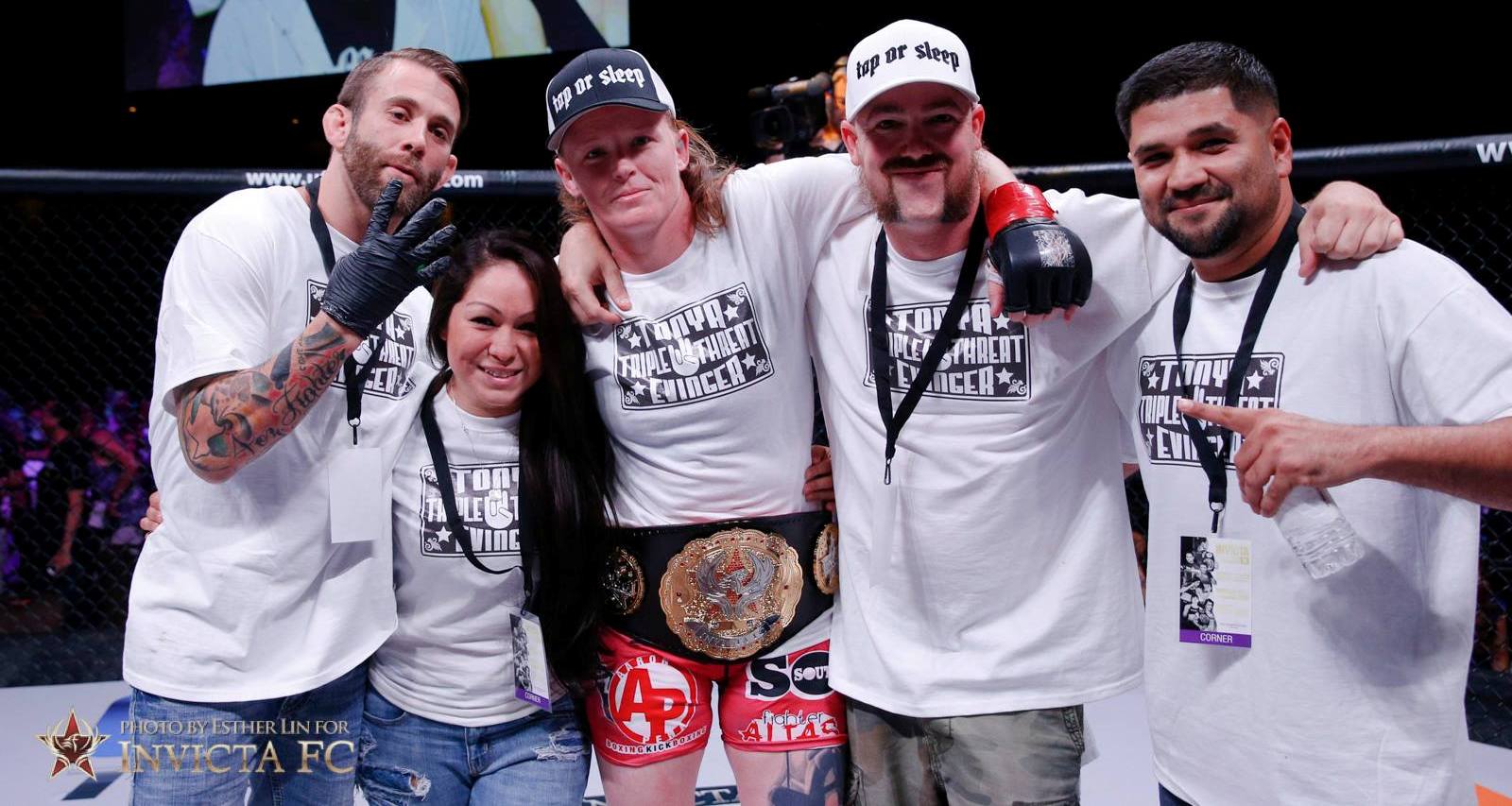 Invicta FC 14’s Tonya Evinger: Back to Beating People Up

Nefarious villain Goldmember said it best: “I love goooollllld.” Okay, maybe that has nothing to do with the sport of MMA, but every fighter’s reaction to winning a belt can be summed up in that quote. Winning gold is the culmination of hard work and sacrifice in a sport that requires plenty of both. For Tonya Evinger, capturing the bantamweight title at Invicta FC 13 was also an instance of acquiring something that had eluded her throughout her productive and illustrious career.

“Winning the gold felt the same as every other fight,” Evinger admitted to Combat Press. “I don’t get into the excitement of winning the belt as everyone else does. I just feel like I’ve already known that I’m as good as I am and I’ve already known that I should be at the top. I’ve already had my opportunities to be there and for some reason I’ve let them slip through my hands. I don’t feel like I’ve done anything great. I just am doing what I should be doing. Everyone gets a little more excited about my belt than me. Of course I don’t wanna lose it, but I don’t wanna lose fights, so that’s the main thing. I’m not going to lose fights, and that’s what’s going to keep me my belt and that’s the most important part.”

Evinger hasn’t lost many fights lately. She’s currently riding a career high of seven straight wins inside the cage, including four victories under the Invicta banner. Her recent success has garnered the attention of many within the sport of MMA.

“To be honest, I don’t know why all these people are talking about my success lately,” Evinger said. “The deal is, I just wasn’t given any good opportunities. And when I was given them, it was on such short notice — ‘Hey, do you want to fight Sara McMann on nine days’ notice? Hey, do you want to fight Alexis Davis on four days’ notice?’ I’m just that type of fighter that’s like, OK, and I blame a lot of losses on that.”

The hectic scheduling and the uncertainties of her fighting future took a toll on Evinger.

“It got to the point where I was fighting because I made extra money and I was good at it, and I just took fights to fight,” explained Evinger. “I did lose my passion. I was training all the time and I wasn’t getting fights and I wanted to quit all the time. I’m a person that has to be stimulated. Competition is important for me. You can’t hold a table up with two legs. You have to have your competition [and] you have to be learning. I don’t want to train all the time and never compete. Over time, it just got to where I didn’t like the sport, like I didn’t like wrestling anymore. I wasn’t competing enough and I [was] just getting burned out.”

Better opportunities have presented themselves for Evinger. Gone are the days of taking fights on such short notice. Her time with Invicta has been approached with reinvigorated motivation and represents a fresh start of sorts.

“I told myself, when I started fighting for Invicta and me and [Invicta President] Shannon [Knapp] talked, that I’m gonna fucking get back to where I was,” said Evinger. “I’m going to go out there and try and beat people the fuck up. I’m not there just to barely win a fight. I’m there to fuck people up. I want to do something and I want to make a point. I want to win.”

In her first fight for Invicta, Evinger made good on her promise. She met Sarah D’Alelio at Invicta FC 7 in December 2013 and walked away with the unanimous decision victory.

“When I fought Sarah D’Alelio, I was in the second round and I remember going through this thought process. I always go through a thought process in my fight and it’s almost a struggle in my own head, thinking, ‘Do I want to win, or do I just want to get tapped out and get out of here?’ But I remember beating her up in the fight, thinking, ‘This bitch can’t fucking beat me.’ I remember turning it up and just started fucking fighting, and I feel that’s the way I fight now,” said Evinger.

It was the first in a string of victories that led Evinger to the Invicta bantamweight crown. She surprised former top featherweight Ediane Gomes with a first-round armbar submission in her next outing at Invicta FC 8. Then, at Invicta FC 10, Evinger locked in a second-round armbar to finish Cindy Dandois in the evening’s co-headliner. After three big wins, she was booked in a title showdown against Irene Aldana at Invicta FC 13. Evinger stopped Aldana via strikes in the fourth round to claim the title.

Evinger’s next opportunity to beat someone up comes Saturday against Pannie Kianzad. The Iranian-Swede is undefeated through her first eight contests and stands as one of the top prospects in the sport at just 23 years old. It’s been an impressive run for Kianzad, a former Cage Warriors champion.

“She’s just so arrogant,” Evinger said of Kianzad. “I think it’s funny how she called out me, Raquel [Pa’aluhi] and Aldana. Like, damn, you just called out the top three and you’ve had only one fight in the U.S. Pannie is ridicilous. I did an interview with her on MMARoasted with Adam Hunter and all this bitch does is talk about sex — everything coming out of her mouth is making her look like a whore.

“Over here in the U.S., we’ve already went through this shit with these girls. MMA has come a long way for the females and we’ve been through already where this girl is making the rest of us and the sport look bad because she’s a hooker. We’ve already went through this shit. It’s just not appreciated and you’re going to ruin the image over here. People want to see real fighters and not hear someone run their mouths about fucking some dudes and ending up in hotels drunk and shit, whatever the fuck she was talking about.

“The fact that she’s fighting me, I think she’s in for it. I’m basically fighting a hooker. I plan on beating the shit out of her. She might be tough [and] she might be talented, but I’m gonna beat the fuck out of her.”